Theres no denying hidden object games have taken on the characteristics of classic adventure games. This means improved stories, investment in characters, and more variety. On the other hand, sometimes this means the hidden game charm that I look for is featured less and less. Persian Nights: Sands of Wonders is a good game and on the surface does everything it needs to do. However, its also on the shorter side, with little bonus content, easy puzzles and not nearly enough hidden object scenes. Throw in a predictable story and nice graphics for a pretty standard hidden object game that players will enjoy.

Players assume the role of Tara, a young apothecary who is trying to find the cure of a plague that is spreading across Persia. On this mission she soon realizes this isnt a plague that a simple herbal remedy can cure, its the work of the evil Grand Vizier Zaved and you must ally yourself with the mysterious yet handsome Darius and the somewhat helpful genie Minu. The story is a typical save-the-world epic with magic, mystical creatures and even some romance. Some romance might be putting it lightly, I liked the interactions with Tara and Darius but wish there were more. A bit of flirting or something, especially since talking to Darius is an ongoing feature in the game. Which adds another complaint in that I wish there was more character development. We mainly learn about Darius from a plot twist and a journal that fills in his past, but we learn nothing about Tara, very little about mostly-mute Minu, and Zaved is given no fleshing-out as a villain. While I know these sorts of games arent expected to be giant stories, if youre adding in a story and focusing on it and the action with less emphasis on other elements, give players more meat. 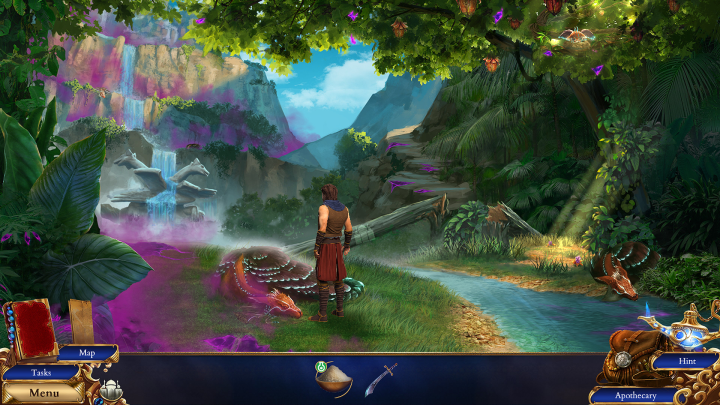 Playing this game on a computer requires a mouse to play and you use basic point and click controls. You click on items to pick them up, interact with puzzles and scenes and also talk to people. There is a dialogue feature only present with Darius where you can talk about a few different topics, some provide backstory and others offer hints to your current situation. As an apothecary, making potions is part of the gameplay but you only make five potions. You also have a book to tell you what to do and it doesnt act as a mini-game so its pretty easy. All the mini-games in the game were relatively easy, I only had trouble with one and thats because I just dont like that particular type of puzzle. The hidden object scenes are also rather easy in nature and are very scarce in the game, which was my biggest issue with the game. Sure, the game has a fun action feel, especially when you take control of Darius to solve physical puzzles or team up with Tara for a two person job, but I play hidden object games mainly for hidden object scenes.

The graphics are lovely, filled with vibrant colors and lush scenery. While some of the animation and cutscenes could be better, overall I was so engaged in the game I cant pinpoint any errors that jumped out at me. Near the end, with Darius, they should have altered his appearance in a certain way and did not which stood out to me but aside from that I found the game to be aesthetically pleasing. There is also fitting background music and full voice acting done by a good cast of actors. It took some time to get used to Taras voice actress and I felt she was the weakest of the main cast but I was happy no one tried to use any bad accents since it was set in Persia. Sure, accents can help with immersion but if theyre bad it comes off as insulting. The game also has a well done user interface and the hidden object scenes are not blurry or insanely hard to see small items. 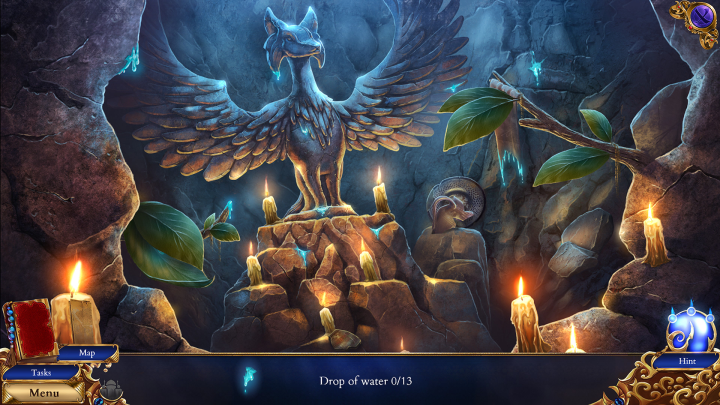 If youre a fan of games in this genre then I do recommend playing Persian Nights: Sands of Wonders. Its fun to play with a good story and it also is visually appealing. If youre playing on Steam there are also achievements and trading cards to collect as well. Since the game is rather easy, collecting all of the achievements in one playthrough is possible. The game lacks a bonus chapter and while it has a satisfying ending that wraps everything up neatly, Ive come to enjoy bonus content. It's also worth noting that basic features like a teleporting map, different levels of difficulty and a journal are present here, though the journal is rather basic. Its a short and easy to play game but I liked it and feel you will as well.
4/5

If you enjoyed this Persian Nights: Sands of Wonders review, you're encouraged to discuss it with the author and with other members of the site's community. If you don't already have an HonestGamers account, you can sign up for one in a snap. Thank you for reading!

© 1998-2020 HonestGamers
None of the material contained within this site may be reproduced in any conceivable fashion without permission from the author(s) of said material. This site is not sponsored or endorsed by Nintendo, Sega, Sony, Microsoft, or any other such party. Persian Nights: Sands of Wonders is a registered trademark of its copyright holder. This site makes no claim to Persian Nights: Sands of Wonders, its characters, screenshots, artwork, music, or any intellectual property contained within. Opinions expressed on this site do not necessarily represent the opinion of site staff or sponsors. Staff and freelance reviews are typically written based on time spent with a retail review copy or review key for the game that is provided by its publisher.