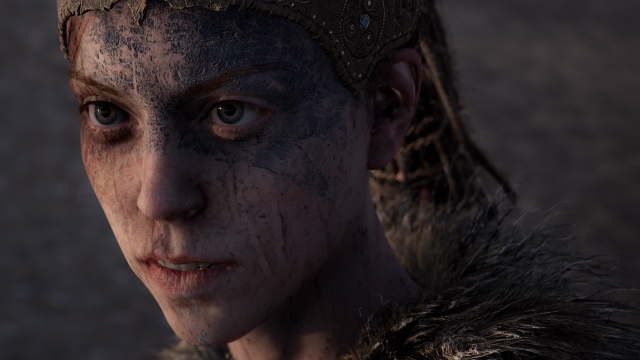 Reality and illusion are blurred lines in Hellblade: Senuas Sacrifice. Senua, the games titular hero, is a strong female lead who embarks on her own personal journey of redemption and self-sacrifice. Her experience, as seen and heard through the player, represents her own personal psychosis via developer Ninja Theorys portrayal of mental illness. Its through their adroit portrayal of a complicated and mature subject that Senuas Sacrifice merits attention as a transcendent entity, striving for  and achieving to some degree  attainment as a higher platform than a mere video game. Yet for all its efforts, its well-crafted touches and impressive aural and visual display, what you may most be aware of prior to reading this review is the games threat of permadeath should Senua fail too frequently.

This threat is made quite clear early on, prior to any foes met or true obstacles encountered. Fail too often by falling to the sword, and Senuas body will become encased in rot. Once it makes it to her head, shes permanently dead, along with her progression. Every failure, every setback, she loses what defines her to the point of losing herself. I have to admire Ninja Theorys wiliness to break established norms in a medium so set with them. They really dont want you to come away feeling like this was a worthwhile experience in a traditional sense.

Instead, youre tasked to endure through the internal struggle that tears at Senuas mind. She is accompanied by voices. Many voices, as a matter of fact. They chatter and bicker, encourage and taunt. Senuas own understanding of her mind acts as a vehicle for the purpose of her quest. Shell encounter loved ones lost as she traverses the Norse-inspired realm of Hel, seeking closure despite the continuous urging and decrying of her every action from the voices inside her mind. This is Senuas Sacrifice at its most impressive. Its continual, unbending vow at wearing down the titular heroine and the player in parallel has no equal.

Unfortunately, this is a video game; and being a video game, there are certain requirements that must be met to realize entertainment value. Ninja Theorys efforts on this front are given far less attention to detail. Despite the threat of permadeath, Senuas Sacrifice is not a hard game. Combat sequences are spaced but mostly feel uninspired. Enter an arena and fight the same one or two enemy models for several rounds, and then move onto another arena after a period of walking. For containing a weapon called Hellblade, the combat never really expands or alters from the outset. Even worse, most of the game is made up of rote puzzles. Find a locked door, explore a linear, boundary-laden environment, find a rune to serve as a key.

I think I can overlook these flaws. If this were a more traditional game, it would lead to a lukewarm recommendation at most. But here, with the amount of detail put into Senua and the amount of focus given to her own inner turmoil, what is offered here is really unlike any other game that I have experienced. Much of the plot progresses as Senua traverses the realm of Hel where there are long pauses in the action where the camera pans across her face, showing all of her weary imperfections in full focus. Her face has such a story to tell. She is pretty yet weathered, accomplished yet lacking confidence. The amount of effort and attention that was placed into her most minute details and renderings sets the bar higher for what we should expect from our video game leads. Its really not enough to just be a one-dimensional brute when such nuance and subtlety can be portrayed on screen with such focused ability.

Ninja Theory had a vision and ran with it when realizing Hellblade: Senuas Sacrifice. This is not a great game, but it is a great vehicle for mental illness and overcoming its debilitating effects. You should seek to experience it in one form or another. At six or seven hours in length its the perfect day project, though I suspect Senua and her endeavors will linger in your mind for quite some time after, whispering to you, humming of mystery.

P.S. This is a digital download only and, therefore, the savings earned from lacking a publisher are passed on directly to you.
4/5

© 1998-2020 HonestGamers
None of the material contained within this site may be reproduced in any conceivable fashion without permission from the author(s) of said material. This site is not sponsored or endorsed by Nintendo, Sega, Sony, Microsoft, or any other such party. Hellblade: Senua's Sacrifice is a registered trademark of its copyright holder. This site makes no claim to Hellblade: Senua's Sacrifice, its characters, screenshots, artwork, music, or any intellectual property contained within. Opinions expressed on this site do not necessarily represent the opinion of site staff or sponsors. Staff and freelance reviews are typically written based on time spent with a retail review copy or review key for the game that is provided by its publisher.