Back in late 1991 Capcom released SF2 which slowly turned into a smash hit (like Double Dragon) spreading like the plague causing almost every developer to make their own 2D fighter with only a very few being original and standing out among the crowds. I think some companies like Taito could have probably cared less about the 2D fighting genre (I'm guessing by Kazuya's ending, not stating). But I guess after a while Taito had to show off their new F/3 hardware and designed Global Champion (though Darius Gaiden shows the graphical power of the F/3 better), but this review is about Kaiser Knuckle/Global Champion.

The majority of large arcade chains did not particularly care for the SNK Neo-Geo MVS type system and Taito's F/3 system is just that, it has a main mother board which you can change the carts anytime instead of hooking up and altering the Jamma cabinet. Mostly the independent arcades had these systems unless the game was a hit (Samurai Shodown) then the large chains had them. What I'm saying is not many people have even heard or know what the F/3 hardware/system is. I'm guessing this is why Capcom made the CPS3 hardware which SF3 is on.

Global Champion is solid, and cpontrols almost identically as Street Fighter 2 with a few innovations. GC came out in mid '94 and I think it was the first fighter to have (or start) a Super/Desperation bar called the CRUSH meter which when full would let you do a desperation move or enhance any one of your special moves doing almost double the damage amount. Something else that is unique to GC are the Fire & Lighting zones which will appear on both sides of the screen. The Fire & Lightning zones differ per individual character and their background. What these zones do is enhance one of your characters special moves in damage and appearance. 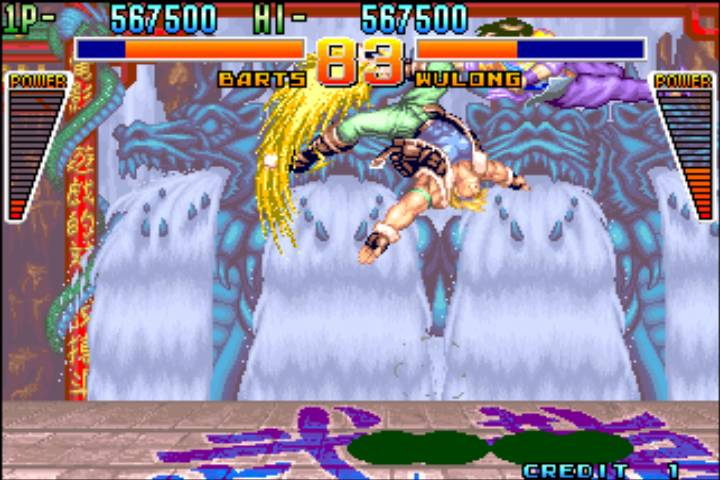 Also every character is able to recover and counter attack while getting hit in the air and can do an Air-dive attack. There's nothing really mind blowing or technically new about GC's gameplay when you get down to it. I should also mention that the CPU has a mind like MK2's CPU.

The control in Global Champion is perfect. Most of the motions are your average Dragon Punch, Sonic Boom commands. GC does stand out in 1 other area, it actually has a 10 button set-up with the six button layout, which goes like this: lp, lp+mp, mp, mp+hp, hp. Some of your special moves are enhanced when you use mp+hp, like when Bart uses mp+hp for his projectile he'll throw 2 instead of 1.

Visually at the time Global Champion came out the graphics were Superior to all other 2D fighters out at the time. GC has at least 5 layers of parallax scrolling, the warping floor scrolling like in SF2 both of which move fluidly and look amazing. Something you will notice when playing GC is the amount of background damage you can do to all the stages. You can pretty much destroy the ENTIRE background, so every time you slam your opponent, get knocked down or miss certain special moves you do some kind of damage, and if you do enough damage you'll eventually open a Fire or Lightning zone. 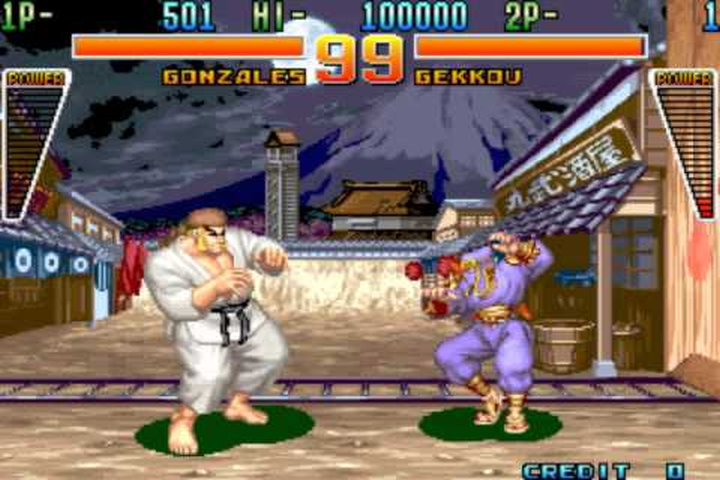 The characters are well drawn with a smooth, deep shaded look to them. The backgrounds are also well drawn and designed rich with color full of little animations. The special effects from when doing special moves to opening a Fire & Lightning look amazing. The individual voices fit their chosen characters well and bring out their personality. The sound affects are good as well. The music is good, fits the backgrounds and is done by Zuntata.

Global Champion's characters are your typical stereotypes, you have your grappler (Gonzales), your shoto (Kazuya), hero (Barts), fool (Marco) and so on. Taito did a good job at bringing out their personalities, just look at Kazuya and you can see his arrogance, you can hear it in his voice (especially in Dan-Ku-Ga, an upgraded version). GC does have 3 (pain in the butt) bosses, 1st being Gonzales, 2nd Azteca and 3rd is the GENERAL. Alright the first 2 bosses are agitating as hell, but with a little patience are beatable....the General (true last boss) is kinda like a hidden character in that you can not continue and you need a certain amount of points to fight him.

First off, I've seen what is now called SNK Boss-Syndrome (Dio WH2, Gill SF3, Rugal Kof94), but after playing the General (on easy) I think it should be called GENERALCIDE Syndrome. This guy is over-powered as hell not to mention is the fastest character in the game. Anything and Everything you do he'll counter, you can't neutralize his projectiles, he rarely jumps at you, and his M. Bison like slide is too fast to counter, he also has an anti-air move where he crouches and shoots 4 images of himself in a dome formation, and he also has a teleport move. If you get to him and beat him you've earned your stripes. 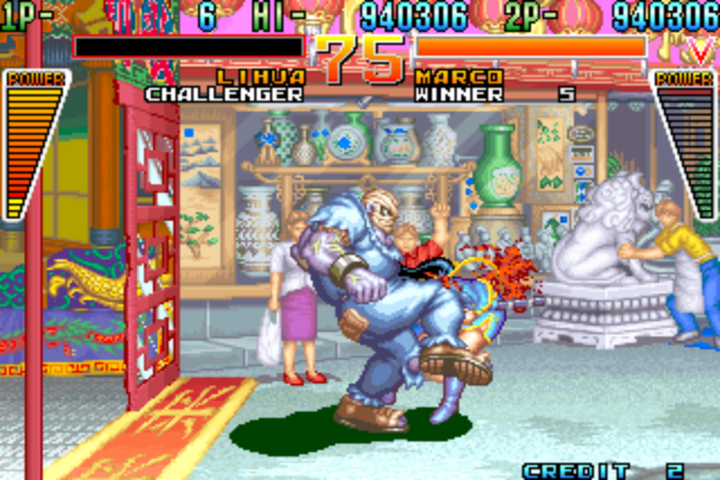 DAN-KU-GA is like a champion edition type upgrade for GC/KK which was never officially released. They took out the Fire & Lightning zones, everyone can now back dash, they changed some of the priorities for some of the characters special moves, made Gonzales & Azteca selectable, you can no longer select who you fight first, you can now select between Beginner, Professional or Practice mode, there's a combo counter, you fight the General automatically as the final boss to name a few. Some of the characters received a new move and some characters move motions changed.

Global Champion never got the attention or distribution as SF2 (what game did), MK, SS or KI so not many people have played it. Is it worth my time? That depends if you like these kinds of games (2D fighters). It had everything to be a great game; Great control, graphics, sound, music and good character designs. There's never been a home release and the only way you can play this is if you have a supergun or Mame, and if you do have Mame it never hurts to try.
4/5

If you enjoyed this Global Champion review, you're encouraged to discuss it with the author and with other members of the site's community. If you don't already have an HonestGamers account, you can sign up for one in a snap. Thank you for reading!

© 1998-2020 HonestGamers
None of the material contained within this site may be reproduced in any conceivable fashion without permission from the author(s) of said material. This site is not sponsored or endorsed by Nintendo, Sega, Sony, Microsoft, or any other such party. Global Champion is a registered trademark of its copyright holder. This site makes no claim to Global Champion, its characters, screenshots, artwork, music, or any intellectual property contained within. Opinions expressed on this site do not necessarily represent the opinion of site staff or sponsors. Staff and freelance reviews are typically written based on time spent with a retail review copy or review key for the game that is provided by its publisher.