Dynasty Warriors: Godseekers tells the story of Zhao Yun and Lei Bin, two warriors who accidentally awaken an ancient and powerful woman named Lixia. The three soon find themselves wrapped up in the inner turmoil of the Three Kingdoms, deciding the outcome of battles that will ultimately shape the political landscape of Ancient China. Along the way, they must also prevent an ancient evil from rising to power and taking over the land.

Dynasty Warriors has always featured a diverse cast of characters that approach battle with their own strengths. Godseekers, a strategy RPG, assigns each character to one of five available classes. It's rare that you'll need to use one class over another, which means you mostly have the freedom to choose whichever characters you prefer (though a few fan favorites like Cao Cao can't be selected until much later in the campaign). Every character comes with a signature weapon, which you must power up by making regular visits to the game's sole merchant. If you don't devote time to that exercise, the character won't remain viable on higher difficulty settings. 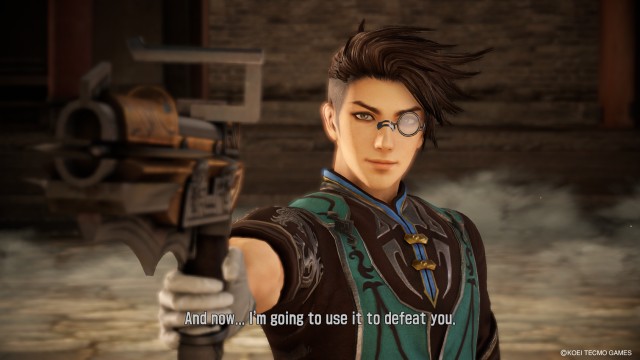 No matter which officers you choose to rely on, you'll have to use the same two methods to strengthen them. First, you gain EXP by defeating enemy combatants. You can then use it to grow core stats and unlock new attacks and Musou abilities at set intervals. Your second growth method is SP, which lets you access a spherical grid and unlock nodes that impart new abilities depending on the character class type. Side quests (known as the Path of Destiny) allow you to gain SP more quickly than you can during standard combat, which gives those diversions elevated importance as you work to improve your character. That's especially true when unlocking nodes allows you to increase the character's strength, or equip a powerful weapon.

Battles are presented on a square grid that should feel familiar to anyone who has played a strategy-RPG in the past 15 years. Primarily, your options are to move units one by one, use the occasional item, or attack enemy units. In proper Dynasty Warriors fashion, every fighter has a number of unique attacks and Musou moves (which generate as you defeat enemy troops) that help to differentiate the characters from one another. Not every character of a particular class has the same range or utility, so the player must choose carefully and think about tactics in advance. Those characters arent limited to just one attack per turn, either; players can use as many attacks as their available energy pool allows (it partially regenerates during each turn of combat), and maybe more besides if they go for a Synchro attack (more on that in a moment).

Godseekers provides plenty of information to let players know what the likely results are for any action they might take, which actually makes the experience feel less tactical than one might hope. Excepting critical hits and the occasional miss (rare, unless you're playing on Ultimate difficulty and facing off against Speed-type units), you have reliable data presented in a concise format. Damage is reduced against enemies that are in Defense mode or similar, and even those variables are accounted for. The probable outcome if you rely on stacked attacks even displays, so that you don't have to risk wasting powerful strikes on a foe that has already been beaten into submission. 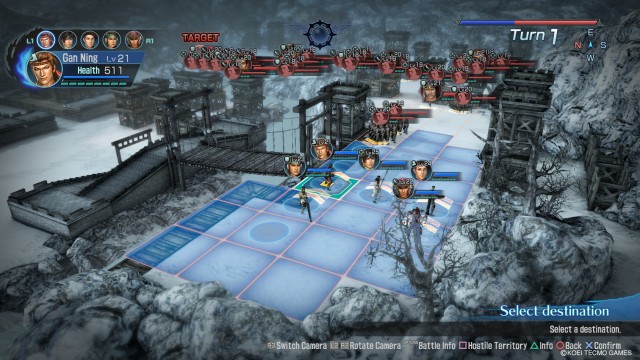 Dynasty Warriors games often feature a single hero who must face off against hundreds of adversaries, and that approximate dynamic is reproduced here. Enemy forces frequently outnumber your own by twenty or more. Nearly all of them are grunts, though, meaning they can barely chip away at your forces due to their inefficient attacks. You can play a mission on Hard (or Ultimate, if you unlock New Game Plus) to give such peons a little more bite, but only the enemy officers should ever give you much trouble. Most encounters also limit the officer count to just five at a time, with slight expansion possible if NPC ally units are on the scene, and that presents an extra tactical layer. The enemy AI often targets those ally units first, leaving your allies out of harm's way until later in the battle.

Every character possesses attacks that can strike two or more spaces ahead (with Musou attacks available that have even further range), so the key to winning any battle is to strike down as many foes in a single turn as possible. The aforementioned Synchro attacks allow players to do precisely that, with greater efficiency than I've witnessed in any other tactical RPG. You just need to have a full meter, and ally attacks even help you to fill it.

Depending what unit type activates a Synchro attack, friendly units within range gain a second wind and can move and attack again in the same turn, with renewed Energy. The last unit to move can then trigger a Synchro attack with all units that joined up, marking a 3x3 space for certain doom and eliminating all but the heartiest of bosses with a single strike. My own strategy was to leapfrog characters around the battlefield, sometimes using the Synchro attack so that I could quickly move closer to the enemy boss and then take them out without having to worry about completing optional objectives. 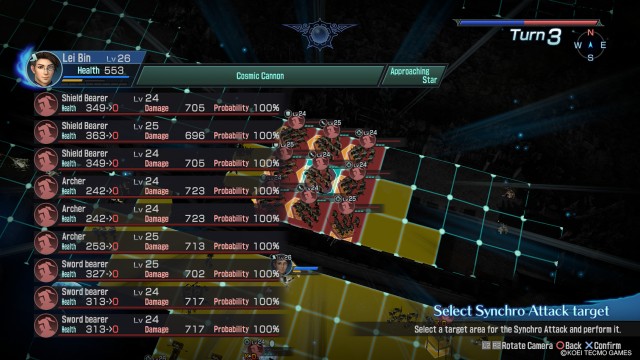 Dynasty Warriors: Godseekers tries to inject battles with the sort of objectives you might recall from the parent series. For instance, you might have played through the Battle of Chibi in a previous title. In that conflict, the use of fire--along with Zhuge Liang's unique strategy--brought down Cao Cao's massive army of boats in a few decisive moments. To fit this historic battle into the Godseekers formula, the developers set things up so that players must protect Zhuge Liang for a set number of turns. That gives him time to pray for favorable winds, as enemy troops enter the field each turn and try to locate him. In other instances, you might be required to escort an NPC to a given destination, or capture enemy bases along the route to the enemy commander. Both tasks should feel immediately familiar to Dynasty Warriors veterans.

Truth be told, Dynasty Warriors: Godseekers most closely resembles a strategy-RPG of the sort that you might have played during the early days of the PlayStation 2. Aside from the Synchro Gauge and the sheer number of troops on the screen at once, there's not much to see here that wouldn't have fit right in with titles such as Tactics Ogre and Onimusha Tactics.

This isn't the first time that Koei Tecmo has tried to build a strategy-RPG experience around the Dynasty Warriors world (Dynasty Tactics comes to mind). Unfortunately, this particular attempt feels overly sterile and safe. If you're looking for a by-the-numbers strategy title, or you want to refresh yourself on the lore and characters before the next number Dynasty Warriors arrives, it's a safe bet. Otherwise, you might be better off passing on it.
3/5

If you enjoyed this Dynasty Warriors: Godseekers review, you're encouraged to discuss it with the author and with other members of the site's community. If you don't already have an HonestGamers account, you can sign up for one in a snap. Thank you for reading!

© 1998-2020 HonestGamers
None of the material contained within this site may be reproduced in any conceivable fashion without permission from the author(s) of said material. This site is not sponsored or endorsed by Nintendo, Sega, Sony, Microsoft, or any other such party. Dynasty Warriors: Godseekers is a registered trademark of its copyright holder. This site makes no claim to Dynasty Warriors: Godseekers, its characters, screenshots, artwork, music, or any intellectual property contained within. Opinions expressed on this site do not necessarily represent the opinion of site staff or sponsors. Staff and freelance reviews are typically written based on time spent with a retail review copy or review key for the game that is provided by its publisher.