It's no secret that people enjoy spooking themselves throughout October. Some may dabble into the horrific imagery, the classic monsters, the eldritch horrors or the psychological drama of fear. All of these qualities are what many would consider as connotations of Halloween.

Halloween for me, however has never been about the scares. While I may sound to be admiring the commercialism itself, I've always been reminded of Trick-or-Treating, Halloween cartoons/specials, and of the creativity/love for the holiday, especially the costumes. These are the qualities adults and kids alike treat themselves to every year. These sentiments are why I find myself revisiting Costume Quest as a tradition. It provides a light-hearted, four to six hour adventure (with the DLC and all the extra quests) that captures the qualities I enjoy the most. Its shortened length and kid-like spectacle perfectly shows the forgotten fondness we have for the holiday of fears. 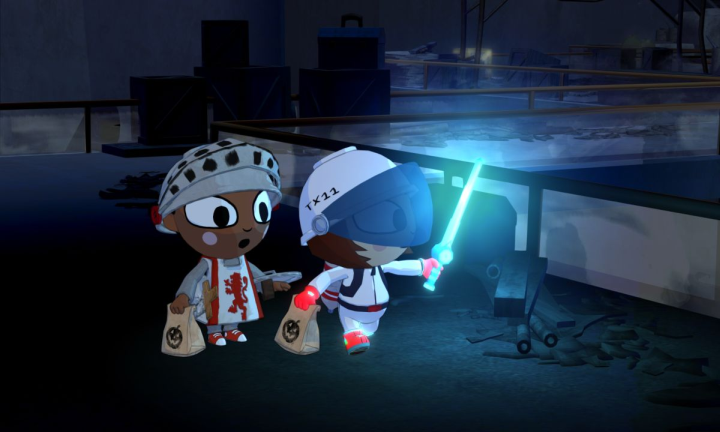 Costume Quest itself has nothing unique that hasn't been seen in TV specials, movies or games. Its set-up is that you play as the brother/sister of a family, and you must rescue your sibling from the clutches of an evil witch bent on taking over Halloween with all the candy. (Also possibly not to get grounded). However, what the plot lacks in originality, the game's humor and execution provide something that shows its charm for being derivative of all the things kids and adults love about Halloween.

If you grew up in the '90s like myself, then you probably are familiar with the trick-or-treat game from Cartoon Network. You walked around an small map with magical costumes, collecting candy from doors and obstacles in a time-limit for high-scores. Costume Quest shares the basic idea of a magical realism setting where the costumes themselves provide supernatural powers for kids. Instead of a competitive, high-score game, Costume Quest is a traditional JRPG game with Paper Mario-like mechanics and various HUB maps to explore. 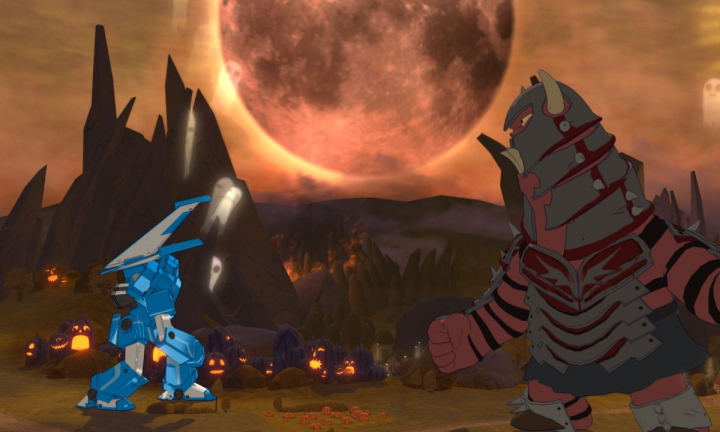 Compared to the Cartoon Network game, the maps are much larger along with providing mini-games and alternative quests for hidden rewards. Outside of combat, every costume provides an ability that varies in its utility. The quests are basic fetch or talk quests, and the level-design is a linear set of checkboxes given some player freedom to wander off. You won't be breaking the game's order of events or getting late-game costumes early.

When in combat, the kids transform themselves into a larger-than-life representation of their costume in what can be thought of as a Power Rangers mech fight. Enemies' designs are dramatized as well to make the combat more visually interesting than watching a blue-box robot fighting demons in bath-robes. That visual alone is how the fighting mechanics should be thought of: Absurd and simple. Like Paper Mario, the turn-based battles are broken up by quick-time-events that add/lower the damage you deal. The player's team and the enemy's take turns trading hits, and while you are on the defensive you can block attacks to lessen the blow. Some costumes have unique abilities like the Knight's Shield (defense buff), the Robot's Missle Barrage and the Lady Libery's Anthem (healing skill).

To say that the combat system is basic would be stating the obvious. There are eleven costumes in the main game, and three new ones in the DLC. Each costume has its one-tailored playstyle and set of skills, separated by one of three costume types like rock-paper-and-scissors, and they each provide enough lasting appeal to keep the game from getting too stale with a limited roster. The game knows its combat isn't its greatest suit, so the variety and short length go a long way to keep the monotonous gameplay as low as possible. 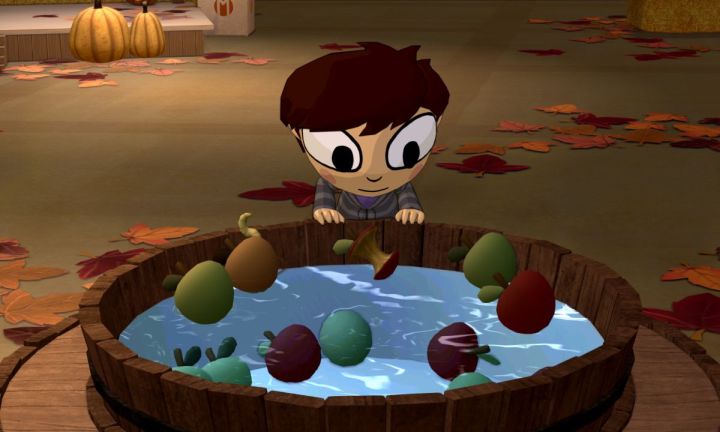 The writing isn't Double Fine's best as it relies a lot on tropes, especially the protagonist and his/her companions, but the subversions from the player's character towards not carrying about the plot helps mitigate that issue. (Kind of like how Doomguy doesn't care about the plot in his recent game.) This is something the DLC as well as Costume Quest 2 fail to grasp as the plot relies on characters explaining the techno babble of wormholes. Neither one captures the same charm as the original.

While Costume Quest is certainly not one of Double Fine's greatest successes it is an experience I would easily recommend to others. Usually I would have something more profound to say to end a review but Costume Quest is simply a decent game. It's nothing innovative in its gameplay, story or even its basic idea, but the way everything comes together nicely makes me longing for next Halloween to replay it again.
4/5

If you enjoyed this Costume Quest review, you're encouraged to discuss it with the author and with other members of the site's community. If you don't already have an HonestGamers account, you can sign up for one in a snap. Thank you for reading!

© 1998-2020 HonestGamers
None of the material contained within this site may be reproduced in any conceivable fashion without permission from the author(s) of said material. This site is not sponsored or endorsed by Nintendo, Sega, Sony, Microsoft, or any other such party. Costume Quest is a registered trademark of its copyright holder. This site makes no claim to Costume Quest, its characters, screenshots, artwork, music, or any intellectual property contained within. Opinions expressed on this site do not necessarily represent the opinion of site staff or sponsors. Staff and freelance reviews are typically written based on time spent with a retail review copy or review key for the game that is provided by its publisher.