What does a game become after spending 10 years in development? If Final Fantasy XV is any indication, it becomes a game with a fractured identity, stuck between the past and the present. That doesnt necessarily equate to a bad result, but Square Enix's latest attempt to revive the faltering franchise never quite managed to clear up all of the warts that its tumultuous development period produced.

Final Fantasy XV tells the tale of Noctis and his friends, who have embarked on a road trip to pick up a girl. That sounds like pretty much every teen comedy ever, but the stakes are not as slight as they seem. Early in the adventure, Noctis kingdom is attacked and his father killed. From there, the game turns into a quest to help Noctis ascend the throne so that he can save his country and, of course, the world. 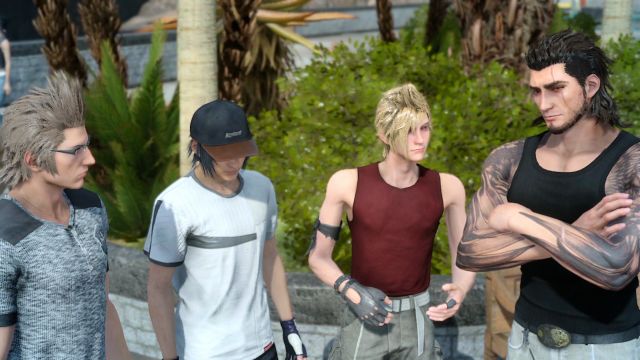 The simple premise allows Final Fantasy XV to meaningfully explore the beautiful open world that serves as the games central selling point. Unlike many of its peers, Square Enix nails what makes a large environment a joy to explore. The scenery is a mixture of realistic and fantastic locales that manages to stay grounded while amazing fans with the kind of eye candy that they have come to expect from the franchise.

Final Fantasy XVs open world is my favorite to appear in a game since the one featured in The Legend of Zelda: Wind Waker, because it actively encourages players to take in the world and all it has to offer. Each main quest takes players across a variety of locations throughout Eos, and helps to introduce the variety of available activities--from side quests to chocobo racing--that dot the landscape. Theres always something to do, and most of it feels substantial. While side quests typically consist of hunting down some item or monster, theres enough context supplied to make even such simple chores feel worthwhile.

Unfortunately, the open world only makes up around half of the overall Final Fantasy XV experience. At a certain point, the game transitions to something that more closely resembles Final Fantasy XIII and its long hallways packed with simple puzzles and battles. One particularly long and arduous sequence in particular removes all of Noctis weapons and forces him to stealthily slip past patrolling monsters. It was the first time I stopped having fun and began to question when the game would finally end. 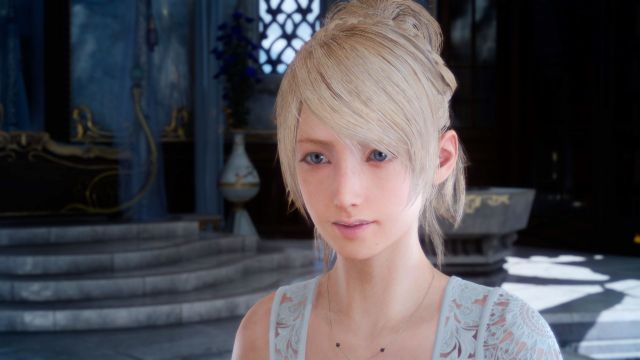 During this more linear sequence, Final Fantasy XVs narrative also takes a nosedive. Previously, the game got by thanks to its charming story of four friends on a road trip. As the game introduces more characters into the plot, were suddenly told to care about the new arrivals without being given much context as to why we should. Some of those characters then die and it bums everybody out, but I couldnt be bothered to care because I never got a chance to connect with them in the first place. There are ways to make a player care by proxy, but were never given enough of a look into Noctis past to see why the apparently tragic events affect him so deeply. Were just told that he cares and that should be enough, even though it isnt.

Thankfully, Final Fantasy XV really comes through with its thrilling combat. There was a lot of anxiety among players, after the move to a full action-RPG approach, and the two underwhelming demos. The final game is a joy to play, however. Initially, Noctis abilities seem rather simplistic. Players only have to hold the attack button in the direction of the enemy and go to town. Battle really opens up, though, as you begin to experiment with warping, magic and abilities.

The warping ability in particular is a stroke of genius. Simply lock onto an enemy and press the appropriate button. Noctis instantly strikes the enemy. This approach not only covers a lot of distance in an instant, but it allows for some battles that are a joy to watch. In showdowns with bosses that move around a lot, it feels like you finally have control over struggles that in previous games were possible only in pre-rendered cutscenes. 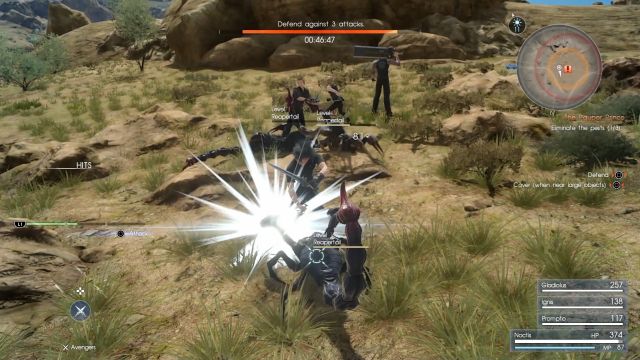 Taking a note from Final Fantasy VIII, the developers relegated magic to draw points that are scattered around the world. Unlike in FFVIII, however, players are free to mix and match magic into custom loadouts. To improve the base spell, you can also throw an item into the mix, which grants a spell additional effects such as healing properties or poison. Its wise to use magic with caution, though, as friendly fire is very much a thing. You can just as easily kill your own party members as you can a monster.

As for abilities in general, Final Fantasy XV implements a progression system that feels like a mashup of the sphere grid from Final Fantasy X and the ability tree from The Elder Scrolls V: Skyrim. Players can purchase abilities with AP earned from leveling up, and those investments increase stats and grant new skills. If players want to get the most out of combat and conquer some of the more difficult post-game encounters, they must invest heavily in new moves that prove just how complex the seemingly simple combat mechanics can actually be.

If there's one criticism I have in regards to combat, though, it's the camera. Too often, it whips around on its own or gets caught on the environment, thus obscuring the action. In later dungeons, the camera frequently becomes stuck as a posse of monsters pummel Noctis. At such times, the only practical solution is to wildly jump around so that the camera frees itself and hopefully shifts to a more beneficial position. 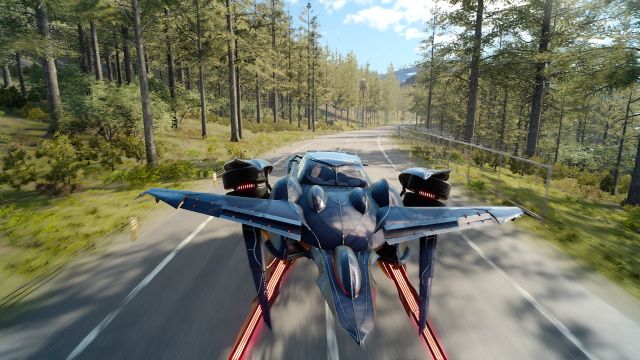 The most amazing thing about Final Fantasy XV is how its able to mostly keep its disparate technical elements running together in harmony. Here is a gorgeous game with some of the best visuals weve ever seen on consoles, and yet its framerate rarely dips. Square Enix worked some serious magic to get the game to perform as well as it does, but its not all roses. The game hard crashed on me once, and also soft locked a few times. It also suffers from the occasional bug, like occasionally refusing to trigger a cutscene when one speaks to a quest giver. Despite such quirks, though, Im amazed that the game performs as well as it does as a general rule.

Final Fantasy XV is not a perfect game, nor is it the savior of the franchise that many hoped it would be. It offers a sometimes strange experience that feels like it got stuck in the crossfire of the competing creative visions that ultimately brought it to light. Development began 10 years ago, and half of the end results certainly feels like a holdover from that time. However, the game's more modern half gives me hope that Square Enix finally knows what to do with the series, going forward. Final Fantasy XV signals a willingness to embrace modernity in order to remain relevant. If the next entry can draw out more of the good that is displayed here, we may someday see an absolutely amazing Final Fantasy XX...
4/5

If you enjoyed this Final Fantasy XV review, you're encouraged to discuss it with the author and with other members of the site's community. If you don't already have an HonestGamers account, you can sign up for one in a snap. Thank you for reading!

© 1998-2020 HonestGamers
None of the material contained within this site may be reproduced in any conceivable fashion without permission from the author(s) of said material. This site is not sponsored or endorsed by Nintendo, Sega, Sony, Microsoft, or any other such party. Final Fantasy XV is a registered trademark of its copyright holder. This site makes no claim to Final Fantasy XV, its characters, screenshots, artwork, music, or any intellectual property contained within. Opinions expressed on this site do not necessarily represent the opinion of site staff or sponsors. Staff and freelance reviews are typically written based on time spent with a retail review copy or review key for the game that is provided by its publisher.