Hexoscope is a puzzle game you've never heard of, produced by Russian developer Studio Binokle. It sells for a single dollar on Steam and is one of many such dirt-cheap puzzle games available if you want a few hours of entertainment. I'll be honest with you: I would have never bought Hexoscope with my own money. I'm not really into puzzle games, but thanks to Steam trading cards and coupons, I was essentially able to get this game for free by spending the chump change jingling around in my Steam wallet. That's not necessarily a bad thing. I get a game for free, and an obscure Russian developer gets 60 rubles through the magic of currency exchange. Everybody wins, right?

The problem is, Hexoscope isn't a lot of fun. The gameplay, while functional, is extremely one-note. All you do is connect power sources to power receivers, and you do this by swapping hexes that contain differently-shaped power conduits. You can swap hexes from anywhere on the board, but the catch is that you can only swap those that are close to a power source or are adjacent to hexes that are already receiving power. Gameplay tends to progress slowly and sequentially as you inch your active circuits closer to the receivers. When you hit a snag, you will have to find a way to refine your previous conduits to make them more efficient in order to free up pieces that you will need to complete your circuit further down the line. You also need to be careful not to swap out a piece that breaks your circuit, or you will lose access to all of your previously available pieces and might have to start the level over. 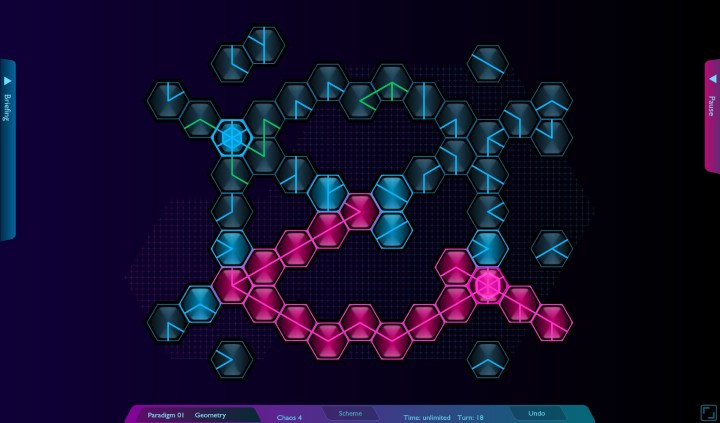 And... That's basically the entire game, right there. There's honestly not a lot here. The difficulty ramps up as you go forward by adding restrictions on which hexes you can move, but that's pretty much it. Some people might be fine with that level of minimalism, but I just found myself kinda bored. Hexoscope honestly just feels like a crappy mobile game that has been ported to PC. I found myself wondering whether the tactile experience of tapping on hexes with my fingers might be more fun than clicking with a mouse, but oddly enough, this game does not seem to be available on mobile devices at all.

That said, Hexoscope does have a few things going for it. The graphics are nice enough, as long as you like pink and blue. It also has a calm, funky synthesizer soundtrack that is nice at first until it gets repetitive. It also has plenty of levels and a time challenge mode if, for some reason, you are really into this game and want to earn as many points as possible.

I went into Hexoscope wanting to be a good sport about it. I like indie games as a general rule, and the idea of an indie team supporting themselves with a tiny, innocuous title like this is kinda cool. We live in an age where small groups of people, armed with only rudimentary programming skills, can get together and develop a game with very little investment cost and make a tidy return. The problem is that there's just so much of that out there, and Hexoscope is just one more thrown onto the pile. The fact that this game is kinda slapdash and lacking in features doesn't help. 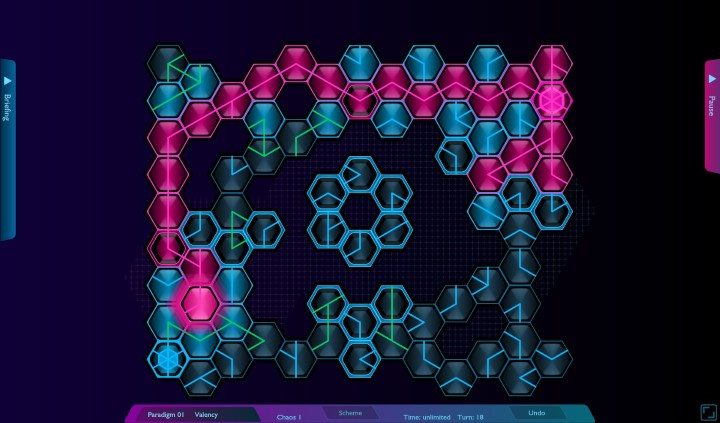 As a side note, I have no idea why it is called "Hexoscope". The suffix "scope" generally implies the presence of an instrument of viewing (i.e., microscope, telescope, colonoscope, etc), but Hexoscope has none of these things. I can only assume that the developers simply needed a title for their game that has the word "hex" in it, and because they have a poor grasp of English (as evidenced by their grammar mistakes in the tutorials and UI), they slapped a random English word onto the end of it. Hence, "Hexoscope".

Anyway, I had a hard time deciding how many stars I should give this game. I'm trying to factor value into account here. It only costs a dollar, and that seems like the right price for it. Hell, I used to spend $1 CAD at the arcade just to play Super Street Fighter II for a couple of minutes. Then again, I probably had more fun in those few minutes than I did with my entire two hours of playing Hexoscope before I got bored and uninstalled it.

This game is a one-trick pony that doesn't last long. I can't think of a single reason to recommend it, unless you happen to be a puzzle game fanatic who needs to collect and play them all.
3/5

If you enjoyed this Hexoscope review, you're encouraged to discuss it with the author and with other members of the site's community. If you don't already have an HonestGamers account, you can sign up for one in a snap. Thank you for reading!

© 1998-2021 HonestGamers
None of the material contained within this site may be reproduced in any conceivable fashion without permission from the author(s) of said material. This site is not sponsored or endorsed by Nintendo, Sega, Sony, Microsoft, or any other such party. Hexoscope is a registered trademark of its copyright holder. This site makes no claim to Hexoscope, its characters, screenshots, artwork, music, or any intellectual property contained within. Opinions expressed on this site do not necessarily represent the opinion of site staff or sponsors. Staff and freelance reviews are typically written based on time spent with a retail review copy or review key for the game that is provided by its publisher.