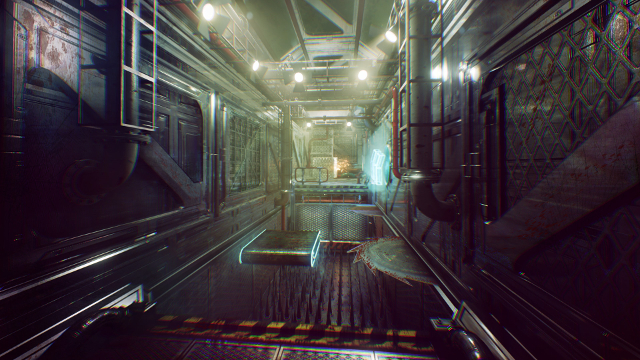 Watch This! is a first-person platformer with horror elements. For a relatively simple game, that pretty much sums everything up. Of course, it wouldnt be any fun without a little bit of flair and sadistic flavor, so the game provides a rather interesting backstory for this parkour-to-survive title. In a society that seeks a more visceral type of entertainment, an innovative broadcast station has taken upon themselves to build a labyrinthine space station filled with monsters and death traps. Players will enter the maze with only one way out, doing anything they can in their power to stay alive and appease fans of the show in order to be granted release from the infernal gauntlet.

The Guts of the Matter

In the current, and fully released, state, there are two mazes to choose from. Upon starting a run, you will be placed in one of a few possible starting locations with nothing equipped. A family photo of who is watching you will be presented for some satirical giggles, but take heed that these family members may ultimately decide your fate. In order to attempt an escape, the player must locate and retrieve two items: a numerical code and the heart of TVoolkhu, after which the player can finally make a run to the exit. To truly escape, the player must also earn the support of his/her family, or that of the viewers. Support from the family is earned by purchasing them presents with currency pickups located throughout the maze, and support from the viewers is earned by playing in an active way: dodging traps, escaping the monsters, etc.

To aid in your survival efforts, two powerups can be randomly selected from a powerup station (once chosen, they will remain for the entire run). These powerups are generally multi-use with a considerable cooldown. Some of the abilities at your disposal include: land mines, fireballs, freeze attacks, barrier constructs, etc. Burgers and coffee pickups are also provided to temporarily distract monsters and recover partial health respectively. Starting with 3 hearts (health), any death will result in the loss of one heart, and a monster attack will deal half a hearts worth of damage, unless exposed for too long. Coffee will recover this half heart loss, but will not recover up to the next full heart.

Throughout the maze, you will often find colored locks which can only be open with the respective keys, scattered throughout the maze. With some experience and a little bit of luck, it is entirely possible to forego finding these keys, as any location in the maze can be reached without them in a roundabout manner. Colored neon signs in the form of arrows can be used as a jump pad if you are parkouring away from a monster. Some of the signs will lead to safety while others will send you straight into a pit of spikes. Be wary of spikes on the ceiling.

For a fully released game, there is still quite a bit of areas that could use improvement. For instance, upon starting the game, there is no form of tutorial or helpful information provided anywhere. In fact, the only way to figure out what your controls are, and your goal for that matter, is by leaving the game and going back to the main menu in order to read the FAQ. There is also no controller support by the way; however, the moveset is fairly simple. Two commands for the powerups, sprint, jump, crouch, interact, and throw burger.

With an audience desensitized to many horror elements, the major scare tactic in this game is with the use of a relatively ultra-loud monster scream when one notices you. At first, it was very thrilling and adrenaline-rushing, especially having to turn around and hope that your parkour skills are up to date, but after a while, the sounds became really grating and there is no method of altering them. It also doesnt help that when the monsters do reach you and start attacking, the attack and damage animations are really basic, and often times, you will be body blocked from escape. At times like this, I feel that the player would experience more frustration or annoyance than terror.

Another major aspect that hurts replayability is the fact that there isnt really any noticeable randomization, or maze alteration. After you escape once, there isnt too much reason to do it again, and there are only two mazes. After a few hours, you should have both mazes memorized for the most part. Technically, the item pickups, keys, code, and heart are randomly scattered at predefined locations, but eventually, if you cant find the code or heart in one location, theres only a couple more locations to look at before you get what you need.

When reminiscing about my time with this game, I can clearly remember the first few runs being pretty fun and sometimes exhilarating for each maze. I would say that there is a solid couple hours of enjoyable, and semi-terrifying exploration before everything becomes old-hat and the game turns into a tedious scavenger hunt. Im not sure what got into me, because regardless of the minor aggravations I had with some of the gameplay aspects, I was still dead set on getting to that exit and seeing the final escape screen. I suppose that in itself is worthy of note. I feel that the developers are very aware of the games limitations, and placed a relatively low pricing point for their game to reflect that. Even with several lacking and apparent weaknesses, I still enjoyed Watch This! enough to feel confident in recommending it to other fans of parkour/action horror games.

If you enjoyed this Watch This! review, you're encouraged to discuss it with the author and with other members of the site's community. If you don't already have an HonestGamers account, you can sign up for one in a snap. Thank you for reading!

© 1998-2022 HonestGamers
None of the material contained within this site may be reproduced in any conceivable fashion without permission from the author(s) of said material. This site is not sponsored or endorsed by Nintendo, Sega, Sony, Microsoft, or any other such party. Watch This! is a registered trademark of its copyright holder. This site makes no claim to Watch This!, its characters, screenshots, artwork, music, or any intellectual property contained within. Opinions expressed on this site do not necessarily represent the opinion of site staff or sponsors. Staff and freelance reviews are typically written based on time spent with a retail review copy or review key for the game that is provided by its publisher.