The survival horror genre used to have a somewhat small fanbase in the early 90s. A genre that was pioneered by a game called Alone in the Dark, then perfected by a game created by Capcom called Biohazard, better known as Resident Evil. Resident Evil was all about zombies and other impossible creatures, evil corporations plotting bio weapon experiments, and getting lost on large grounds while figuring out puzzles and why these zombies and other creatures exist. It was a winning formula that captivated a new audience and really pushed Survival Horror games into the spotlight, making them a staple of gaming. Soon after that, Capcom decided to try and push the envelope a little further with a sequel.

Resident Evil 2 came out on the last day of the year of 1997, December 31st. The reaction to that game was even more positive than the first game. There were the improved graphics and sound, way better voice actors/actresses, and great looking CGI cut scenes. It seemed the RE2 was head and shoulders better than its progenitor and that the Survival Horror genre was on it's way to a healthy and prosperous life.

The game was still presented basically the same way the first game was, but RE2 was much improved compared to RE1 as it is in all arenas. There is still that clear picture with nothing on it but your character and your surroundings, no HUD, no health indicator, a completely clean picture. The menus are much nicer looking and of course so are the cut scenes, no more bad live acting.

This game plays pretty much like RE1 with no real gameplay changes. The only thing you could say that would be different are that the scenarios are actually related if you will. For instance, when you play as Leon, the rookie cop of Raccoon City, eventually when you go to the basement of the police station you get to the armory and you open a locker. Inside that locker is a sub machine gun and a side pack that will give your character two more inventory spaces, if Leon takes the side pack and you beat Leon's scenario, when you go to play as Claire, Chris Redfield's younger sister, the Sub Machine gun will be left there for her. Of course you could just take both but that would just show your lack of foresight. 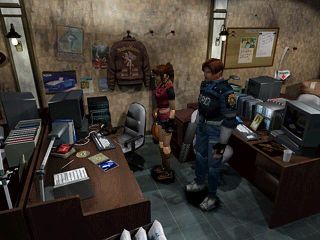 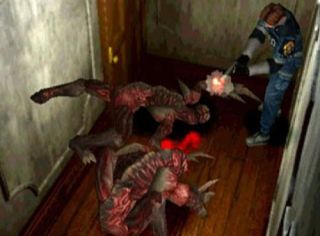 It's not just those two items though, it's pretty much everything in the game. You have to think of the character you are playing and his/her condition but also think ahead about the other character when you play him/her. Your goal is to basically escape the infested Raccoon City while figuring out what the hell is going on. Pretty much the tried and true RE formula that has worked over the years except the word city is replaced with other things like Island, or Research Facility, etc. Again there really isn't anything different with actual gameplay mechanics. You still have the tank like controls, the running, holding the aim button before you shoot all that good stuff.

On to modes of play, you've got Rookie Mode which is just very easy because they start you out with an SMG and as soon as you can reach an item box you have health items a Gattling Gun, and a Rocket Launcher in there, I only recommend this to kids or people who scare very easily unless you don't like being challenged any. Original Mode is the mode you should be playing. You start with a 9mm handgun fully loaded and a knife, and nothing in your item box when you first get to it.

While not terribly improved, the enhanced graphics are welcomed anyway. The thing that improved the most was the pre-rendered backgrounds. They are much more detailed in this game. The character models are also more detailed and look a bit better, but they still look like they have action figure joints. Oh well, you can't have everything. The cut scenes, on the other hand, look very nice, especially when you considered the time it was made.

Along with almost everything else, the sound of this game is overhauled compared to RE1. The gun sound effects are more clear and don't sound as muffled and they certainly don't sound cheap. The voice acting is miles better than RE1 although some people liked the bad voice acting simply because it was hilariousand I agree. The music is also so much better than the previous game's music. It seems richer and seems to give off a better feel than the older soundtrack. I love listening to the Police Station's main hall theme and the safe room theme as well. 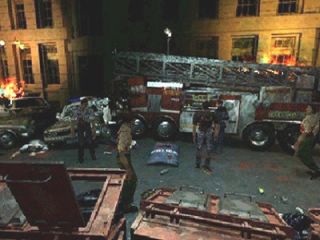 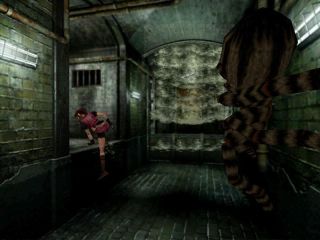 Another thing they have executed better with the sound department was that it seems like they've learned to take better advantage of using sounds to make people tense or to just flat out scare them, another thing I must salute.

The replay value you can get out of this game varies. You can play your scenarios out of order just so you can have differing situations available to you and a slightly altered storyline. Really the way it's supposed to be is Leon A Scenario (play Leon first) and Claire B Scenario (play Claire after), but if you do the reverse of that it changes things a bit. There are a few modes to unlock as well so don't fret. You can unlock EX Battle Mode where you start off with two characters, Leon and Claire, and your goal is to run through a gauntlet of monsters from the Underground Labs (from the end of the game) to the Police station (near the beginning of the game). After you beat this with each character you will unlock another character related to the one you beat the mode with. If you beat it with Leon you unlock his partner in the story Ada Wong, if you do so with Claire you can unlock her brother Chris from RE1, much cooler in my opinion.

You can also try going for an A Ranking with both characters in the real game to unlock a mode called the 4th Survivor where you play as Hunk, a surviving member of Umbrella's retrieval team in the story. His objective is to make it from the sewers of Raccoon to the roof of the police station for extraction. This is a pretty fun mode but if anything it's more like EX Battle with another character. You can also unlock a mode where you play as a block of Tofu but it's mainly a waste of time since all he can do is knife enemies, and using the knife is generally useless. Another thing you could attempt is one of those legendary knife runs where you go through the entire game just using the knife that RE nuts like to attempt for whatever reason, you could also try doing a speed run where you just try to beat the game as fast as possible, another thing the regular RE community likes to do.

Resident Evil 2 is one of those games where you give an example of what sequels should be like, pretty much improved in all areas. In my mind this was an important title for gaming because I think it further pushed the Survival Horror genre into the mainstream of gaming, opening many doors for bad imitations, unique ideas, and a few rival game series. This game is also still considered one of the best Survival Horror games of all time, one of the best RE games ever, and even one of the best games of all time. If you've always wanted to play an RE game you owe it to yourself to try this, it should do the job that you're looking for.

If you enjoyed this Resident Evil 2 review, you're encouraged to discuss it with the author and with other members of the site's community. If you don't already have an HonestGamers account, you can sign up for one in a snap. Thank you for reading!

© 1998-2021 HonestGamers
None of the material contained within this site may be reproduced in any conceivable fashion without permission from the author(s) of said material. This site is not sponsored or endorsed by Nintendo, Sega, Sony, Microsoft, or any other such party. Resident Evil 2 is a registered trademark of its copyright holder. This site makes no claim to Resident Evil 2, its characters, screenshots, artwork, music, or any intellectual property contained within. Opinions expressed on this site do not necessarily represent the opinion of site staff or sponsors. Staff and freelance reviews are typically written based on time spent with a retail review copy or review key for the game that is provided by its publisher.