Hack & Slash Meets Rogue-Lite
Heart&Slash is an eccentric, procedural, 3D rogue-lite dungeon-crawler. Where most rogue-lites stop at procedurally generating dungeons guarded by hefty bosses, H&S provides a unique twist to the genre by incorporating a hack & slash combat system along with a quest-based story and reward system. This artistic entry into a popular genre flooded with top-down grinding provides a breath of fresh air; one that is needed to further the boundaries and expectations of rogue-lite games.

Gameplay
Heart's World
Due to the rebellion of the Quality Assurance System, a Robolution eliminated all of humankind leaving only robots remaining. 100 years later, you awaken as Heart, an innocent robot. With the guidance of Dr. Sympathic's virtualized mind, you must fight to escape the grip of mindless machines.

Heart inherits the ability to carry one primary weapon, and two secondary weapons at all times, along with having sufficient space to equip four different body attachments/armors. Its move set includes a double jump, sprint, roll-dodge, weak/strong attacks and ground/aerial attack combos. An attack combo can be broken with a jump or dodge if needed, as long as you are not in the middle of a strong attack. Starting with 6 hearts, with most enemies hitting for about half of a heart, you must guide Heart through 3 worlds, each with its unique style of enemies, art design, and bosses. In addition to Heart, you will find yourself playing as 5 other robots if you manage to unlock them. 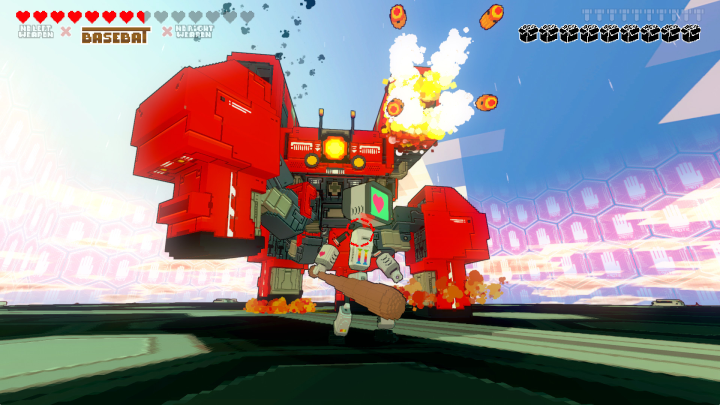 Enemies & Bosses
There are 91 different enemies to discover, varying from traditional horde grunts, flying death machines, super robots, and bosses. Each enemy, when defeated, will drop Bolts and sometimes health. Although it generally isn't too difficult to maintain a relatively safe amount of health (>50%) at any point in time, what makes H&S difficult is how hard each unique/boss level enemy can hit. Even though your enemies will telegraph their moves ahead of time, the half-seconds it takes to break Heart out of an attack combo will sometimes be its downfall. Fortunately, you are free to flee a room at any time barring a unique encounter or story event, especially because the goal is to reach the end of the world/boss, not to discover every room. 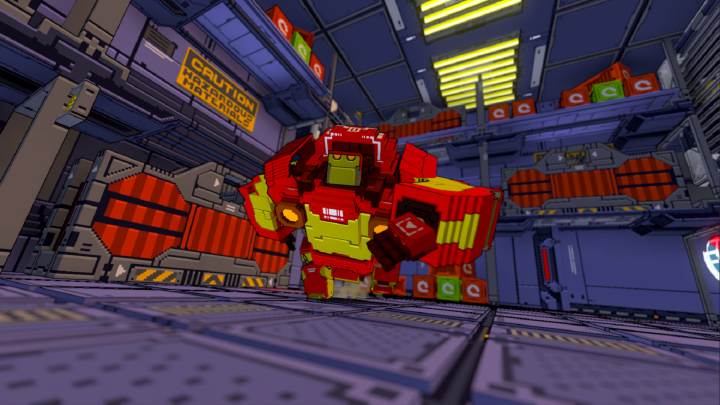 For the most part, you will turn most enemies into scrap (such is the nature of a hack & slash game), but if a unique/boss type enemy clips you (which will happen a lot), don't expect to take more than a few hits before dying. Like with many rogue-lite games, everything will be difficult at first, but the more time and effort you put into learning the enemies' attack styles, the more you get out of your experience with this game. Many enemies will also have specific weakness indicated by its nature or displayed color. Knowing these weaknesses and using the right type of weapon will go a long way.

Weapons & Equipment
There are 135 weapons & equipment available to be unlocked. The weapons come in the form of swords, halberds, guns, etc. and some of the equipment Heart will come across include rubber duck armor, trash can lid shields, elemental bracers, etc. These items can also be recycled (destroyed) to heal your robot.

An important thing to note is that once items are unlocked, they become a part of the pool of procedurally generated pickups, and must be discovered each time for use. There is no guaranteed starting item; however, upon initiating a new run, Heart will always begin with 3 item pickups (weapons/equipment).

With enough Bolts, a Box of Bolts is automatically generated, and these Boxes are used to upgrade an item of your choice. Weapons & equipment generally have multiple upgrades, such as: increasing damage, range, refinement, nimbleness, etc. Utilization and mastery of these upgrades are necessary in order to successfully defeat the more difficult enemies and bosses. In addition to equipment, Heart and other controllable robots can also be upgraded with Boxes, providing the ability to jump higher, run faster, evade more, etc. Upon death, any unused Boxes will carry over to the next life. 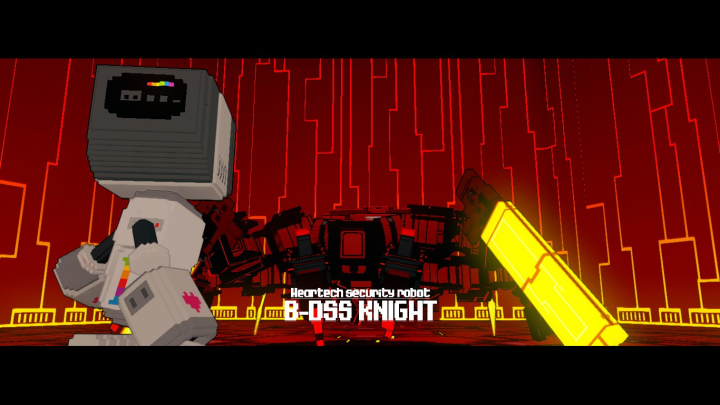 Quests
Progression in this game comes in the form of discovering quest rooms (points of interest) and fulfilling those quests in an effort to unlock new items/weapons/equipment for discovery. Each completed quest will also provide a Steam Achievement! There are 71 quests for Heart to complete, and some of them include: defeating X number of specific enemies, survive X, find X, and experience X story related events. Unlike the typical resetting consequences of permadeath, once a quest is completed, it will stay completed. You can keep track of all of the completed/incomplete quests (along with each quests progress), discovered enemies, and discovered equipment from the main menu.

This form of progression is probably one of my favorites, as it provides a very satisfying feeling of success and a measure of accomplishment. Although it is not as impactful when compared to the progression system in other rogue-lites, such as one found in Enter the Gungeon (currency to unlock weapons and scavenging demands for elevator skips) and Rogue Legacy (currency to unlock skill-trees and abilities), H&S move away from a currency system is a nice change.


Conclusion
Hopes For Improvement
Although the camera is fully controllable, in the midst of a heated battle, an improved auto-camera tracking system is desired. Often times you will find the camera providing an obscured or blocked view due to clipping textures. It would also be nice to see some enhancements to the hack & slash combat system, such as lengthier/upgradable combos, etc. seen in popular games of the genre (most notably the Devil May Cry series). Implementing a targeting/lock-on system for those pesky flyers would also make combat feel much more fluid. Other than that, there aren't many aspects in this game that I find really lacking.

Verdict
In all honesty, I personally love rogue-lite games, especially ones with a neat twist to them. Heart&Slash not only harmonizes the hack & slash and rogue-lite genres, it provides a unique and eccentric story and art-style alongside a satisfying progression system. In a field where The Binding of Isaac, Enter the Gungeon, Nuclear Throne and the like dominate, H&S is an almost worthy competitor to the aforementioned heavy-weights  just a little more polish is needed. This makes it very easy for me to recommend Heart&Slash to fans of the rogue-lite/hack & slash/dungeon-crawler genres, especially since a 3D variant has yet to claim its stake over the top-down competitors (Im looking at you Necropolis).
4/5

If you enjoyed this Heart&Slash review, you're encouraged to discuss it with the author and with other members of the site's community. If you don't already have an HonestGamers account, you can sign up for one in a snap. Thank you for reading!

© 1998-2020 HonestGamers
None of the material contained within this site may be reproduced in any conceivable fashion without permission from the author(s) of said material. This site is not sponsored or endorsed by Nintendo, Sega, Sony, Microsoft, or any other such party. Heart&Slash is a registered trademark of its copyright holder. This site makes no claim to Heart&Slash, its characters, screenshots, artwork, music, or any intellectual property contained within. Opinions expressed on this site do not necessarily represent the opinion of site staff or sponsors. Staff and freelance reviews are typically written based on time spent with a retail review copy or review key for the game that is provided by its publisher.