I love first-person shooters a lot less than I did before they began chasing Hollywood spectacle. Too often, control is taken away from the player. Acts of badassery are handed over to an invisible guiding hand, to make sure players dont miss a thing. Whatever happened to the shooters of old, where one man facing off against the armies of hell was enough? If DOOM has anything to say about it, theyre still around.

DOOM is ostensibly a reboot of the FPS franchise that started it all back in 1993. While Wolfenstein 3D was technically the first FPS, the original DOOM established most of the tropes that shooters still borrow to this day. With its latest incarnation, id Software has created a game that respects and celebrates its roots, while simultaneously updating the core formula to create something that feels old and new in the best of ways.

For the uninitiated, DOOM can be summed up with four words you encounter on a monitor within the first minute of starting the game: Demonic invasion in progress. Sure, theres a larger story about a science facility on Mars attempting to harvest energy from hell, and the way things go awry from there, but it doesnt really matter. Even Doomguy, the closest we get to a proper name for the protagonist from the series, doesnt care about the plot. Multiple times in game, he destroys monitors that are trying to deliver new developments, and I cant help but salute him for it. 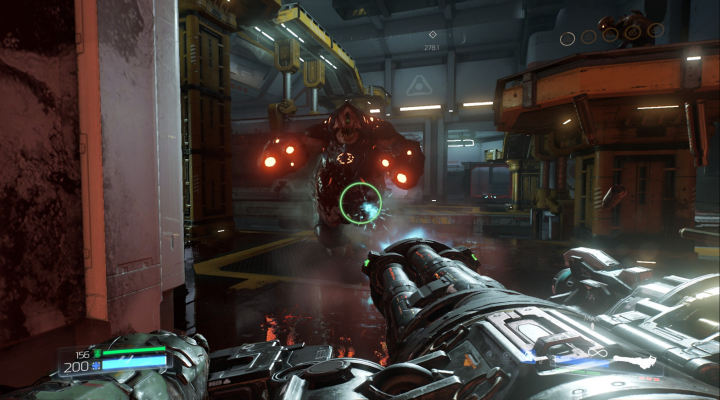 The only thing new players need to know about DOOM is this: there are demons that you must kill using big guns, speed and vicious melee attacks. The maps are gigantic labyrinths that reward exploration with more efficient and badass ways to exterminate. Hell is still one of the best locales in which to set a video game.

Of course, DOOM is only as good as its guns. While players will start off with a simple handgun that can fire a charge shot, its not long before the game delivers the holy grail of FPS weapons: the shotgun. From there, the arsenal expands to include the usual plasma rifle, rocket launcher, super shotgun and, of course, the BFG 9000.

What makes DOOM so impressive is that each gun feels powerful. None ever become obsolete as newer guns are collected over the course of the campaign. Sure, the rocket launcher does more damage than the shotgun, but the latter becomes a death incarnate after you acquire the triple shot mod. Besides the handgun and super shotgun, which is ludicrously powerful on its own, every other weapon gets two mods that keep weapons lethal to the very end. 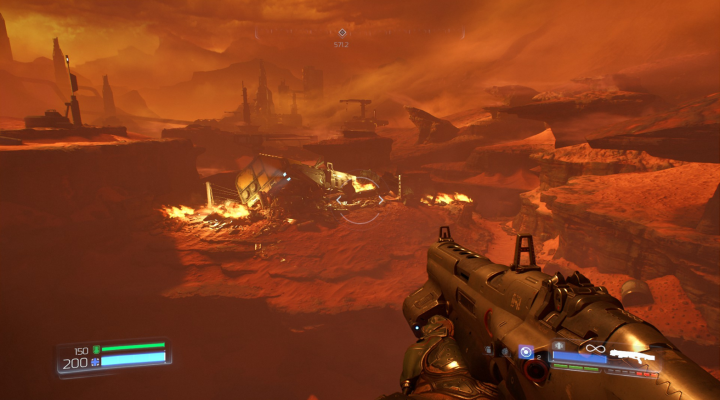 A common complaint about the otherwise great DOOM 3 was that it moved too slowly. Thats not the case in DOOM, since Doomguy moves as rapidly as ever. You'll find that his speed is essential, if you're to survive the arenas that pit you against dozens of hells finest. That speed highlights just how boring modern shooters have become, with their stop and pop progression. In DOOM, you keep moving or you die.

One new addition is a glory kill which has Doomguy ripping, punching or tearing demons in half after he stuns them with sufficient fire power. No demon is immune to this assault, and its immensely satisfying to see a demon three times your size have its horn ripped off before you stab it through its skull. These glory kills also dish out health and armor, so its essential that you get up close and personal.

Then there are the maps, which may be my favorite since those offered in DOOM II. Each level is massive and feature tons of secrets. Sometimes you'll find a weapon or armor upgrade, but elsewhere you may discover fun little bonuses, like levels from the original DOOM or little Doomguy bobbleheads that play the guitar riff from that title. 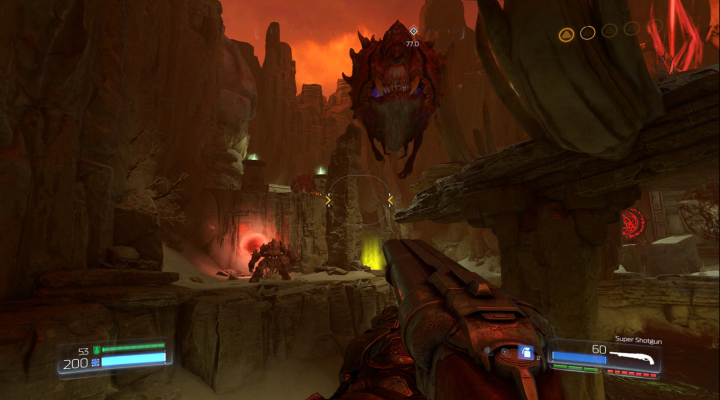 It doesnt hurt that levels feature some incredible visual design, from the dilapidated labs on Mars, to the heavy metal album-inspired hellscapes. Hell is especially incredible, and remains largely underutilized in the overall medium. Theres a lot to explore visually in hell, and DOOM really nails the atmosphere and design that I expect from a modern rendition of hell within the DOOM universe.

As for the technical side of things, id Tech 6 is a wonderful engine. One of my major complaints with id Tech 5, which was used in Rage and Wolfenstein: The New Order, was that textures were slow to load. That could leave players with a world devoid of detail for several seconds at a time. It also decreased stress on weaker machines by de-loading textures when they weren't in the line of sight, but quick pivoting revealed seams. With DOOM, those problems are eliminated by a new engine that runs on high settings at a solid 60FPS, even on my 4-year-old PC.

Besides featuring a fantastic single-player campaign, DOOM features a fleshed out multiplayer component. I was skeptical at first, after hearing all the negative buzz surrounding the beta, but I came out of my experience pleasantly surprised. 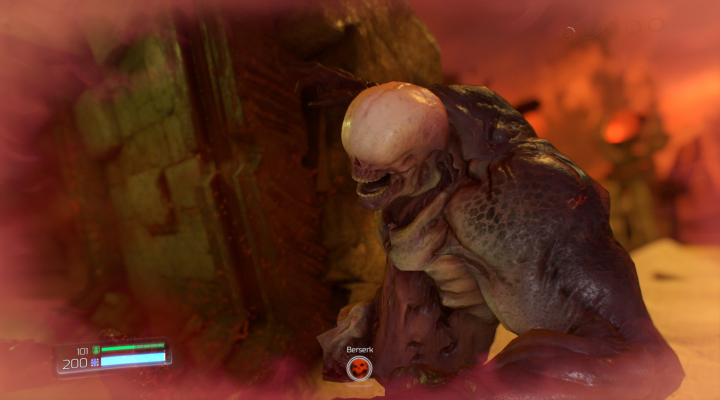 Ill be the first to say that Im not really into competitive multiplayer shooters, but I have a soft spot for Quake. DOOMs multiplayer is like a slightly slower take on Quake, with maps that emphasize platforming, tight corridors and cubbyholes. To add a wrinkle onto the basic formula, a demon item spawns during the match that allows one player from either team to transform into one of four hellspawn. Theyre incredibly powerful weapons that can completely alter the course of a match, for better or worse. The demons are, fortunately, balanced to prevent them from possessing too much power. They can be killed like any other enemy, and transformed players are also limited by a timer.

Rounding out the package is a new mode called SnapMap. It purports to allow players to create their own maps and multiplayer modes. Im not a creative person, so the map creation aspect of the package didnt do anything for me, but I sure do love taking advantage of other players' creative talents. Theres not a lot to explore at the moment, but there are already recreations of levels from DOOM and DOOM II in co-op, and horde-style maps that find players fighting off increasingly difficult waves of enemies. Most excitingly, it appears that creators can alter speed on these maps to create truly Quake-like multiplayer experiences.

I absolutely love DOOM. Its like running into a childhood friend that you havent seen in a decade, only to find that theyre every bit as awesome as you remember... and then some. With DOOM and Wolfenstein: The New Order, Bethesda is now two-for-two when it comes to reviving old id properties with stellar results. Heres hoping a new Quake isnt far behind...
5/5

© 1998-2020 HonestGamers
None of the material contained within this site may be reproduced in any conceivable fashion without permission from the author(s) of said material. This site is not sponsored or endorsed by Nintendo, Sega, Sony, Microsoft, or any other such party. DOOM is a registered trademark of its copyright holder. This site makes no claim to DOOM, its characters, screenshots, artwork, music, or any intellectual property contained within. Opinions expressed on this site do not necessarily represent the opinion of site staff or sponsors. Staff and freelance reviews are typically written based on time spent with a retail review copy or review key for the game that is provided by its publisher.