Konnichiwa!
Most people choose their next video game because it looks cool, has great multiplayer, offers an expansive world to explore, has an involving story, or the like. On the other hand, most people who choose to play this game do so for a different reason...to attempt to learn a bit of one of the hardest foreign languages, Japanese, in an interesting, entertaining way. Learn Japanese To Survive! Hiragana Battle accomplishes this by giving the player an RPG Maker title where they aim to help the player learn one of the basic Japanese writing systems as well as a bit of Japanese vocabulary. Enter a world where you must battle Hiragana Warriors to save the world and the only way to defeat them is to accurately identify each one! 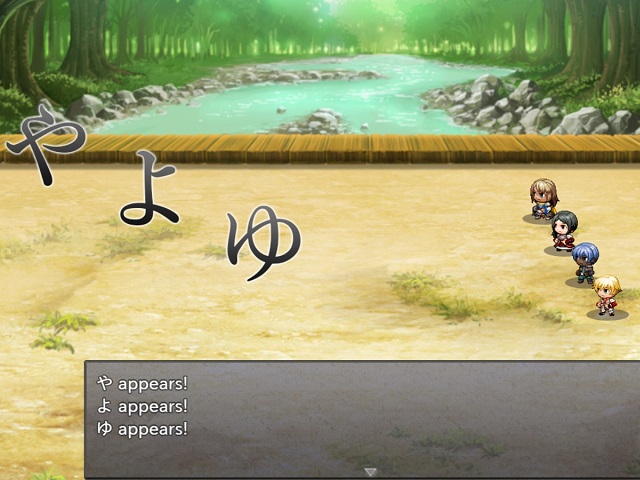 Fun Foreign Language Foundations
The Japanese writing system consists of three different groups of characters: hiragana, katakana, and kanji. Hiragana and katakana work sort of like our alphabet in that you can use these phonetic systems to create any word in the Japanese language. Hiragana is used to represent native Japanese words while katakana is used to represent words of foreign origin. Learn Japanese to Survive! Hiragana Battle sets out to teach you this system of characters. It aims to do this through clever use of an RPG system. In the battles your enemies will be "Hiragana Warriors" and the only way to deal damage to them is to identify them. If you don't give the right "answer" you won't deal any damage and will have to try again next turn. Throughout the game the player will slowly be taught the hiragana characters and, after each lesson, they will be sent on a mission that both progresses the storyline as well as gives them an ample opportunity to practice their newfound knowledge! Outside of the unique answering system everything else is pretty standard for an RPG Maker title. Expect to see turn-based combat with the player being able to level their characters up and buy new weapons, armor, and items. There are a couple of side quests on top of the main storyline as well.

If you strip away the learning aspect, Hiragana Battle is actually a pretty lackluster title. The storyline is pretty uninteresting without any real surprises. The characters are not developed very well and won't really get anybody really invested into them or the game. The music and game mechanics are both serviceable but not much more than that. Additionally, there are some annoyances when playing the game. Perhaps the worst one is that the battle's menu system gets really cluttered as you advance through the game. You have to choose from a larger and larger pile of answers as you learn more which can quickly become a bit cumbersome. Another annoyance is that the game lacks a lot of meat. It only focuses on the hiragana system and a very small set of vocabulary. Fast learners will be able to burn through this title relatively quickly and find themselves without much else to do. With all those negatives you may think that Hiragana Battle must not be a good title...but that isn't really true. There may be flaws with the game, but none are so glaring that they kill the game experience. It accomplishes its main objective: make learning hiragana fun! Incorporating an RPG system into something highly repetitive, like learning to recall and identify foreign characters, works well together like peanut butter and jelly. The story and characters may not be very intriguing on their own, but they work just fine when the player's main focus is to learn more. You may even want to grind out some extra battles as you struggle to learn hiragana because, hey, at least then you can afford that new shiny armor or get your next level! 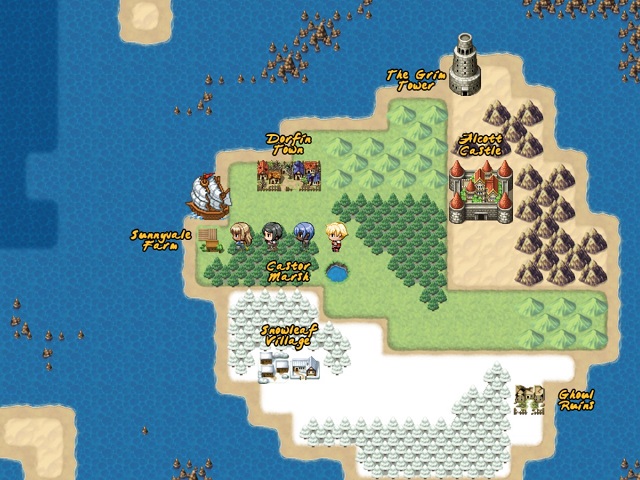 Domo Arigato (Mr. Roboto)
As chance would have it, I was actually taking Japanese 101 in university when I saw this game release on Steam. I'm a pretty big RPG fan, needed help learning the material, and it was pretty cheap anyways so I figured I'd pick this title up and give it a try. I was not disappointed. While I wouldn't actually say that this works well as a standalone to get introduced to Japanese, I would highly recommend it as a supplement when you are starting to learn. It not only gave me a bit of practice in recalling and identifying characters, but it did so in a pretty fun way so that I wasn't bored all day trying to make myself pay attention to flashcards. Even though I realized that the gameplay and story would be pretty bad if taken alone...the fact that I was learning Japanese while going through the relatively simple plot kept me engaged, and I never got bored while playing. The only minor gripes I have is that they spell out some of the vocabulary with hiragana when it should be spelled using katakana and that the battle menu gets crowded later in the game. Overall, this is a great game to play for people just starting to learn Japanese, and I'd definitely recommend it for that group of people, however, it isn't perfect and doesn't really hold up as a great game on its own.

Learn Japanese To Survive! Hiragana Battle is a 3.5 / 5, for being a great game for the niche market of early or casual Japanese learners, but having a lot of noticeable flaws and not really doing much reach outside of that very specific market.
4/5

If you enjoyed this Learn Japanese to Survive! Hiragana Battle review, you're encouraged to discuss it with the author and with other members of the site's community. If you don't already have an HonestGamers account, you can sign up for one in a snap. Thank you for reading!

© 1998-2021 HonestGamers
None of the material contained within this site may be reproduced in any conceivable fashion without permission from the author(s) of said material. This site is not sponsored or endorsed by Nintendo, Sega, Sony, Microsoft, or any other such party. Learn Japanese to Survive! Hiragana Battle is a registered trademark of its copyright holder. This site makes no claim to Learn Japanese to Survive! Hiragana Battle, its characters, screenshots, artwork, music, or any intellectual property contained within. Opinions expressed on this site do not necessarily represent the opinion of site staff or sponsors. Staff and freelance reviews are typically written based on time spent with a retail review copy or review key for the game that is provided by its publisher.