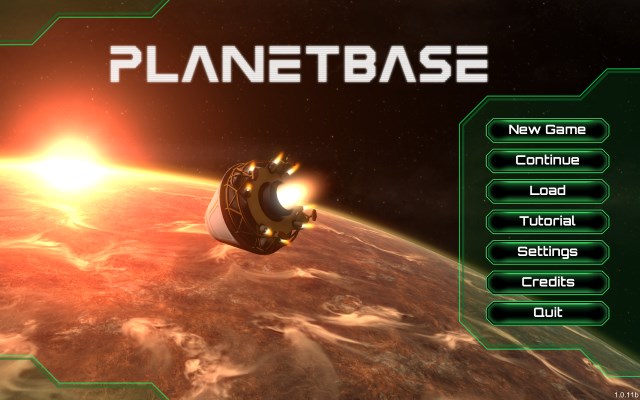 Do you like games that don't respect your time? Do you enjoy having 5-10 hours of work destroyed within a few short minutes? If so, you've come to the right place!

Yes, Planetbase is one of those games. You know the ones I mean. Games that are ridiculously difficult, extremely punishing, and teeth-grindingly frustrating just for the sake of being so. They're everywhere on Steam right now - It's kind of a trend in gaming. Planetbase's developers didn't have to follow this formula, but they decided to anyway, and that is a shame. If they hadn't, Planetbase might actually be fun.

Though perhaps I exaggerate. What I mean to say is, Planetbase is extremely fun for the first few hours - up until your base comes tumbling down like a house of cards. Which it will, guaranteed. When it does, it will happen so fast that it will leave you in shock. 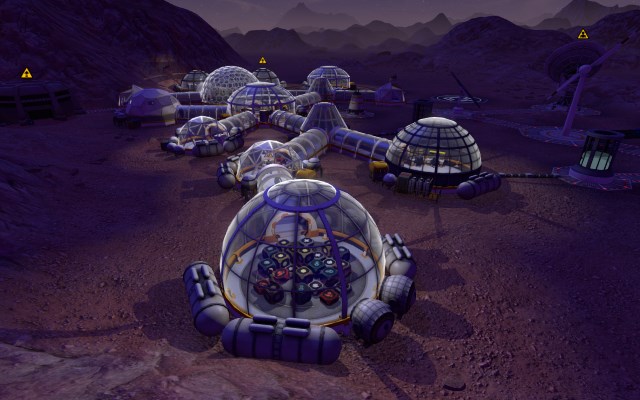 For example, let's say that a meteor strike hits one of your power cells during the night. Let's also suppose that there are low winds during that night, so your wind turbines can't pick up the slack. Now you have no power, and all of your oxygen generators have gone offline. You watch helplessly as all of your colonists die of asphyxiation. There is absolutely nothing you can do about it.

Another scenario: You've let too many colonists into your base, and now you have a food shortage. Despite hurriedly building more crop modules and synth-meat machines, all of your colonists have become critically hungry and refuse to work. You watch helplessly as they mope around the cafeteria, forlornly looking at the meal dispensers and wishing that food will somehow magically appear instead of doing the work to make the food appear. You mark the bio-dome as a "priority work assignment" in a feeble attempt to get your colonists to farm the damn crops already, but they utterly refuse. Every single one of your colonists dies of starvation. You sigh and wish to yourself that this was Dungeon Keeper so that you could slap your workers into doing their damn jobs. 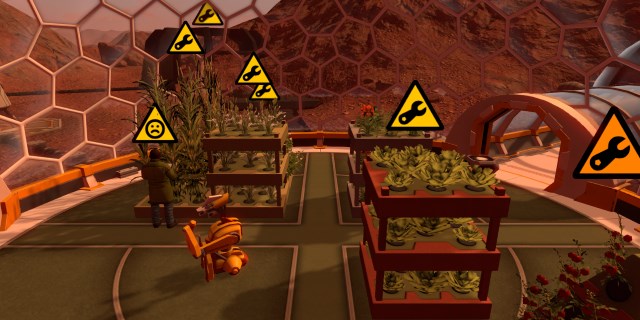 Basically, Planetbase is a complex machine with dozens of moving parts, and all of these parts must be kept in perfect equilibrium at all times or else it's game over. If one thing goes wrong it can be nearly impossible to recover from. The only reprieve is the fact that the game keeps autosaves like crazy, and you can potentially turn back the clock in order to prevent catastrophe. The caveat is that you need to know what went wrong in the first place, and sometimes it's hard to tell.

While the colonists appears to act very intelligently at times, they will also act in ways that will puzzle you. Workers may stand around idle doing absolutely nothing when you think they should be working, but for some reason they just won't. There is probably a reason, but the game is very bad at explaining itself. It could be that a colonist wants to perform a job but there aren't enough resources available to do it. It could be that their physical needs are too low - colonists have six needs, and if even one of them isn't completely met, they may stop working or start acting erratically. It could be that a section of your base has unsafe levels of oxygen. Until you pore over every single aspect of your base, you just won't know, and in the meantime those colonists will sit around, leeching resources and being unproductive while you try to figure it out.

And I suppose that's the joy (and frustration) of this game. This is not a game where you can simply build something pretty, relax and watch your citizens do their thing. No, that's what Cities: Skylines is for. Planetbase is a resource management simulator plain and simple, and every resource unit counts. You can't even build a fucking potted plant in this game without weighing whether or not you can afford to spend the resources. I'm not even kidding.

With all of that said, Planetbase does have a lot going for it. It has beautiful graphics, amazing sound design, and a soundtrack reminiscent of Jerry Goldsmith's score for Alien. The game's mechanics are enjoyable enough until everything goes pear-shaped. I think the developers' hearts are in the right place; this game is probably pretty realistic in terms of what managing a colony on a desolate alien world might be like. After all, without a plentiful biosphere like Earth to rely on, every little thing in your colony's possession would count and have to be accounted for. You would have to become self-sufficient or perish. Hell, that could be the tagline for this game.

Planetbase does a lot of things right, but its extreme difficulty feels arbitrary and unnecessary. Even the easiest planet will utterly crush you on your first few playthroughs. Let me be clear: I am not against difficult games (I thoroughly enjoyed playing FTL: Faster Than Light and Darkest Dungeon, for example), but I definitely dislike games that do not respect my time. Unfortunately, Planetbase is one of them. Spending half a day to build a base only to have it unceremoniously destroyed in the blink of an eye is not my idea of a good time.

You might be one of the masochists who likes that. If so, this game is definitely for you. Either way, you've been duly warned (or informed, case depending).

If you enjoyed this Planetbase review, you're encouraged to discuss it with the author and with other members of the site's community. If you don't already have an HonestGamers account, you can sign up for one in a snap. Thank you for reading!

© 1998-2021 HonestGamers
None of the material contained within this site may be reproduced in any conceivable fashion without permission from the author(s) of said material. This site is not sponsored or endorsed by Nintendo, Sega, Sony, Microsoft, or any other such party. Planetbase is a registered trademark of its copyright holder. This site makes no claim to Planetbase, its characters, screenshots, artwork, music, or any intellectual property contained within. Opinions expressed on this site do not necessarily represent the opinion of site staff or sponsors. Staff and freelance reviews are typically written based on time spent with a retail review copy or review key for the game that is provided by its publisher.