Pirates not Plants!
Are you familiar with the original Power Strike? In it you take on mutant plants and their brain washed followers in your jet fighter, providing some of the most intense action on the Sega Master System (SMS). Thankfully (or not if fighting plants are your thing), Power Strike II's storyline is totally unrelated to the original. In this game you are put in charge of defending the skies of Italy in the 1930's from unrelenting sky pirates. While the story is totally different the gameplay is pretty similar with some improvements. Power Strike II gives you everything you could want from a vertically scrolling shoot em' up. Expect tons of enemies, tight controls, and some of the fastest-paced action on the console. 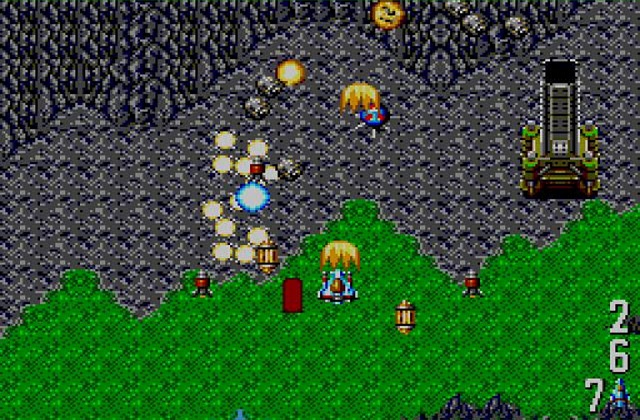 Power Overwhelming
The basic gameplay of Power Strike II pretty much mirrors that of any standard vertically scrolling shooter. You pilot a jet fighter. You fight hordes of enemies. You can power your ship up. And each level ends with a boss. The good news is that, even though the basic game formula is as standard as they come, the execution is extraordinary. How well it all comes together is centered around the graphics and the controls. The graphics do look great, but that, by no means, makes this game great. The real wonder is what the game is able to handle graphically with minimal ill effect. Power Strike II throws a TON of enemies and bullets at you during each of the levels. Added to that, these guys come in hot, diving, shooting, and destroying you at ludicrous speeds. This creates an epic game experience, allowing it to deliver breakneck action, nonstop. All this action would be horrible, however, if the controls didn't allow you to navigate it precisely...fortunately, they do. The control setup is responsive, but also intuitive and actually covers one of the main weaknesses of the Master System. Button 1 shoots, and holding it down autofires your weapons. Button 2 can either change the speed of your aircraft OR pause the game (with the speed of your aircraft being set in the options menu). This is actually pretty genius. The action is so furious and unabated that you really don't have time to get up and pause the game the normal way (since the pause button is located on the Master System console itself). Having the pause on the controller really helps. If you want to forgo pausing the game easily, then the adjustable speed is also a nice touch that can help you navigate the bullet hell that you are likely to be put in.

Even though this game really delivers a lot, and delivers it well. It isn't perfect. One of the first things to note is the fact that, since there is so much going on, you will see some flicker. However, the flicker doesn't really detract from the game and isn't so common as to really be more than a minor issue. Likewise, if you let things get really out of hand and have a ton of enemies and their bullets on the screen then you may get a bit of slowdown. However, slowdown is pretty rare and if you are suffering from it, chances are you probably won't be around too much longer anyways. Probably the worst flaw in the game is its difficulty. Power Strike II can get simply insane at times. Navigating the bullets, enemies, bullets, enemies, and more bullets and enemies is just too much a lot of the time. The good news is that, when you die, you only lose about half the power of your weapons. The bad news is that losing that power can likely mean that you won't be progressing much further, leading to a quick spiral of deaths draining the rest of your spare lives. Really though, these are only minor complaints that you can nit-pick about the game that don't do a lot to detract from the overall experience. 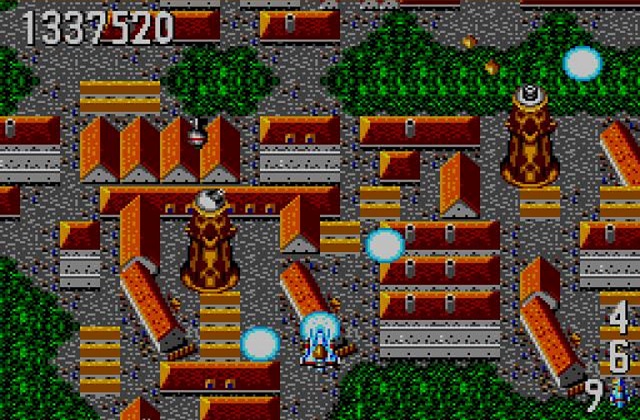 The Best Shoot em' Up on the Master System
I was honestly not too enthused to try out Power Strike II. I had heard it was pretty good, but the screen shots made it look like a standard variety vertical shoot em' up...and I am no fan of shoot em' up's. But, I played a shoot em' up recently that I did enjoy so I gave this one a chance too. Man, I was blown away. On one hand, this really is just a standard vertical shooter. On the other hand, it's probably the best 8-bit execution of one that I've played. How good the game looks, how fast everything moves, and the sheer volume of things going on make this seem more like a 16-bit game than something on the Master System. With that said, I did find the difficulty to be too much for me. However, I have to admit that I generally suck at this type of game, so I didn't hold the difficulty against the game as much as I took it as a representation of my poor shooter skills. Overall, I'd say that I did have a blast, regardless of my gratuitous death count. I think that, being one of the best 8-bit shoot em' ups out there, every retro gamer should give this a try, but shoot em' up fans, especially, should really not miss out on this treat.

If you enjoyed this Power Strike II review, you're encouraged to discuss it with the author and with other members of the site's community. If you don't already have an HonestGamers account, you can sign up for one in a snap. Thank you for reading!

© 1998-2021 HonestGamers
None of the material contained within this site may be reproduced in any conceivable fashion without permission from the author(s) of said material. This site is not sponsored or endorsed by Nintendo, Sega, Sony, Microsoft, or any other such party. Power Strike II is a registered trademark of its copyright holder. This site makes no claim to Power Strike II, its characters, screenshots, artwork, music, or any intellectual property contained within. Opinions expressed on this site do not necessarily represent the opinion of site staff or sponsors. Staff and freelance reviews are typically written based on time spent with a retail review copy or review key for the game that is provided by its publisher.