Created in 1984, the BattleTech universe is one of the best known science fiction settings for my generation. It is in no small part thanks to the computer games, titled MechWarrior, which popularised this setting and a concept of a BattleMech  a bipedal behemoth powered by a fusion engine fitted into a skeletal frame moved by strands of myomer (artificial muscles), clad in tons of armour, armed with lasers, missiles and guns striders the battlefields of the XXXI century raining death on everything that stands in its way. And each of these mighty engines of destruction is piloted by a single individual, a MechWarrior. There are no aliens, no supernatural powers, just humans and their never ending conflicts.

What is MechWarrior Online?

In essence it's a free to play game that is designed to simulate the clashes of teams of 12 MechWarriors piloting their Mechs on various battlegrounds of the future. Compared to other F2P games I played (mainly World of Tank and Warthunder) I find MechWarrior Online (MWO) a much better experience. First off - there is not tech tree. This means that you can buy whatever Mechs you want as long as you can afford them. Secondly - the business model. You REALLY ONLY NEED to spend money in this game to buy new mechbays for your Mechs. And even those can be earned through playing Community Warfare mode or achieving goals at special events that are run several times a year. But if you want to have access to certain stuff quicker or buy premium time you can. It is entirely up to you.

As mentioned before the game plays like a simulator. Each of the several dozen Mechs available in it pilots differently, has different stats such as top speed, acceleration/deceleration, max yawn and pitch angles of the torso and arms, maximum tonnage, number, location and type of weapons mounts, amount of armour on different section of the Mech, ammo and heat sinks capacity and so on. This allows for a very wide customisation of a Mech in terms of armament, speed, protection and heat dissipation, which is important. If you overheat, your Mech powers down for a few seconds and becomes a sitting duck. On top of that it can take some damage to is power core which in term can lead to the Mechs destruction. ALWAYS WATCH THE HEAT METER. 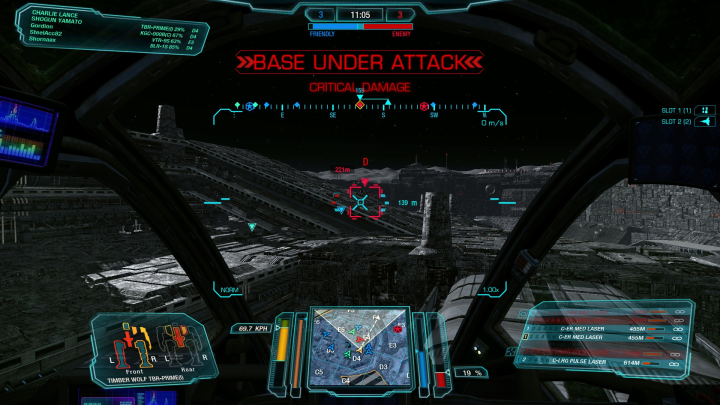 New players wont have to bother themselves with all that customisation bit. You will have no in game cash (CBills) to buy Mechs and will have to rely in trial ones which cannot be customised. Yet during your first 25 matches you will be rewarded extra CBills, so after those games you will probably by able to buy even the most expensive Mech.

Furthermore, You should really look through the key bindings and either learn the setup or rebind it to you preferences. The most important ones are Target Lock, Full Stop and Push to Talk (cooperation with others is key to victory). And finally - PLAY THE TUTORIAL  most of the game mechanics are explained there, plus you get 2,500,000 CBills which a beginner really needs.

Once you hit the button to search for game and be paired with other players, you will be thrown into battlefields rendered with the CryEngine 3. Depending on your setting they will look from plain to gorgeous. Each map is different, some have a few variations depending on the weather conditions or day/night time. You get deserts, canyons, forests, cities, snow and ice, volcanoes, swamps, you name it. Getting to know the maps helps a lot as you know the possible enemy approaches, ambush spots and best firing positions. 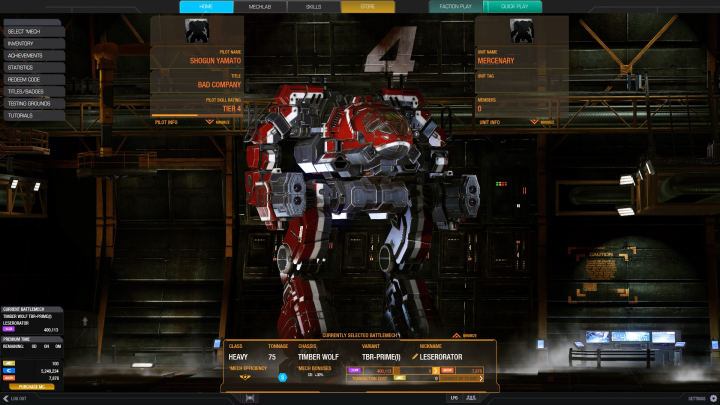 Regular games have one of three objectives  destroy the enemy team (skirmish), cap their base or kill them (assault), gather 750 resource points by controlling key areas on the map or kill them (conquest). Simple but fun.

When the shooting starts it can be very organized of completely frantic. It all depends on the teams you are in. Fortunately you usually play with players with similar experience level so its happens very really that you are thrown against really good players or teams of such, which can literally obliterate an entire enemy team in 5 min. The clashes themselves look fantastic  lasers firing, bullets and missiles flying around, lots of sparks and explosions. After a few minutes of fighting most Mechs show signs of damage, from bullet/laser holes to missing limbs and weapon mounts. All in all it is simply enjoyable to watch. And also to hear. Though the in game music is nothing special the SFX are simply a blast. Each individual sound, from the hum of the fusion engines, which is different in every Mech, to the sounds of various actuators, the stomping of Mech legs, sounds of being hit, hitting obstacles to very distinguishable weapon sounds make this game a very immersive experience.

The Mechs and Balance.

As mentioned before MWO doesnt use a tech tree. Instead the balance is done by allowing a specified number of Mechs from each of the 4 classes to enter a match. The classes are as follows:

LIGHTS  20 to 35 tons. Role  scout, sniper, assassin, harasser.
Pros  very fast, small targets, manoeuvrable, low purchase cost, most have ECM which makes them hard to detect at a distance (you can still fire at them when you have visual contact).
Cons  low armour, few weapons mounts, low ammo space, will overheat quickly when weapons are fired continuously. 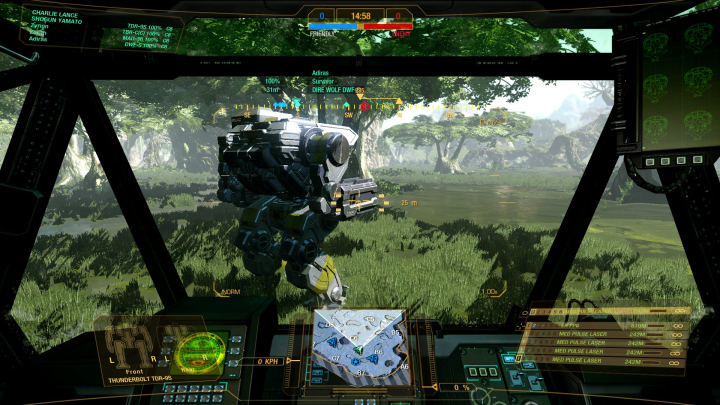 MEDIUMS - 40 to 55 tons. Role  second line Mechs, flanking, sniping, brawling, support (with LRMs).
Pros  quite fast and manoeuvrable, reasonable cost, considerable amount of weapon mounts, ammo space, quite good armour
Cons  yet not good enough to be in the first line of an assault, need to rely on heavier Mechs to spearhead it.

HEAVIES - 60 to 75 tons. Role  first line Mechs, flanking, sniping, brawling, support (with LRMs).
Pros  some can be still quite fast, numerous weapon mounts, good armour, loads of space for ammo, survivability under fire.
Cons  costly to purchase, big targets, not as manoeuvrable as lights and mediums.

Then come the weapons:

Lasers, Pulse Lasers and PPCs dont use ammo but generate the most heat so cannot be shot for too long without pause. Come in different sizes with their own pros and cons.

LMRs  used as fire support, some love them some hate them. Just remember to have your talget constantly locked on so that the missiles hit.

SRMs  act more or less like a shotgun with 270m max range. Very nice for brawling but generates considerable heat. 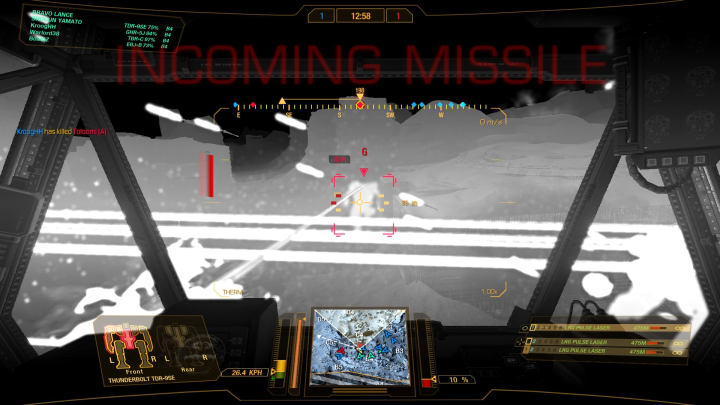 Considering all of the above, the combinations are numerous and it will often happen that your Mech will be very good in one combat scenario and completely useless in another. Just bare in mind that the most powerful and game breaking weapon is TEAM WORK.

For me MWO is currently the best F2P game out there and one of the very few that lets you bash it out against gigantic robots. So if you are bored with the setting of WOT, WarThunder and Armoured Warfare, want to try something new or just like SF themed game  jump right in. It will just cost you some of your time and who knows, maybe we will meat on the battlefield in the same team or in my Tiberwolfes crosshair.
4/5

If you enjoyed this MechWarrior Online review, you're encouraged to discuss it with the author and with other members of the site's community. If you don't already have an HonestGamers account, you can sign up for one in a snap. Thank you for reading!

© 1998-2020 HonestGamers
None of the material contained within this site may be reproduced in any conceivable fashion without permission from the author(s) of said material. This site is not sponsored or endorsed by Nintendo, Sega, Sony, Microsoft, or any other such party. MechWarrior Online is a registered trademark of its copyright holder. This site makes no claim to MechWarrior Online, its characters, screenshots, artwork, music, or any intellectual property contained within. Opinions expressed on this site do not necessarily represent the opinion of site staff or sponsors. Staff and freelance reviews are typically written based on time spent with a retail review copy or review key for the game that is provided by its publisher.