From Anime to Zillion
Become a part of the White Knights, an organization fighting against the diabolical Norsa Empire. Three heroes, J.J., Apple, and Champ, are armed with the Zillion Laser...the only thing capable of defeating your foes. Infiltrate their base to destroy it and save the Planetary System! This is Zillion, a Sega Master System (SMS) action-adventure game. Zillion's storyline is actually based on an anime series of the same name while its gameplay has been compared to both Metroid and Impossible Mission. What does any of that mean, you ask? Well, you can expect a lot of shooting and platforming while navigating a massive, maze-like base filled with enemies, obstacles, and goodies. 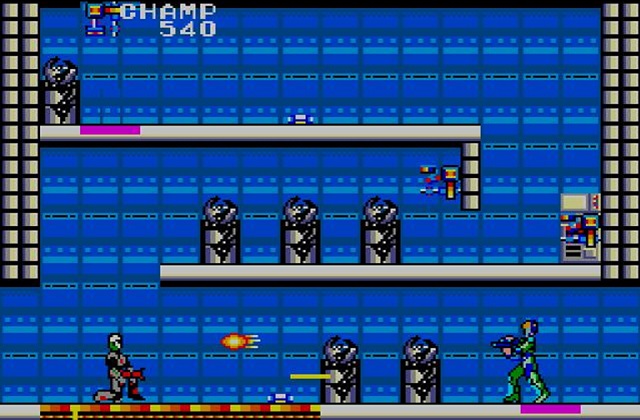 If Your Plan is Stored on Floppy Disks...You May Want to Rethink Your Strategy
In Zillion, you start out with J.J. while Apple and Champ are already captured inside the Norsa base. So, obviously, one of your goals will be to save your friends which turns out helping you greatly to complete the game since once you find your friends you can pause the game to switch between them. J.J. tends to be more well-rounded while Apple is more agile and Champ is more powerful and sturdy. On your way through the base you can find power-ups to make your heroes stronger, like increasing your laser power or making your current character stronger. You also need to find five floppy disks which contain their plans for destruction (yeah, these Norsa guys are WAY behind the times) and the red ID card, which is needed to access the main computer. The Norsa base is huge and built like a maze. It is made up of a series of rooms with obstacles and, in order to advance, you need to input a unique, four-character-code found in the cylinders of that room. The game ends up incorporating elements from several different genres to make a sort of action-adventure hybrid with puzzle, platforming, and RPG elements. This makes for pretty in-depth, diverse gameplay that is unique and great fun for its time.

Out of the many things you will have to do in Zillion, (shooting Norsa soldiers, finding codes for each room, dodging mines and auto-guns, or finding a great power-up) the most memorable aspect of the game is navigating your way through the Norsa base itself. The base is divided into 3 distinct areas with a steadily progressing difficulty as you make your way through each one. At first it isn't too bad, but eventually you will start hitting many branching pathways or places that you will need to backtrack to in order to get everything. Make sure you have a good memory or draw a map, because it is one confusing labyrinth! But, finding your way through it all is pretty engaging and makes you feel great once you do start knowing your way around. There are a lot of other things to enjoy while playing Zillion, but the game isn't perfect. The first thing that needs mentioning is that the game takes a while to sit down and complete. Even if you know what you are doing it should take you well over an hour, maybe even two, to finish. That isn't a bad thing by itself, but when you consider that the game has no password or save feature, it actually becomes pretty restrictive. Also, the controls seem a bit sluggish. When you duck or jump expect a slight delay in your actions. You can quickly get used to it, but it doesn't take away from the fact that the controls don't seem as responsive as you would want them to be. It should also be mentioned that the graphics seem a bit bland in comparison to other, more colorful and cartoonish, SMS titles. Finally, the fact that you need to find a unique code in most rooms and input it into the computer in order to move forward does get tedious...especially if you aren't the best at remembering things and need to write it down. However, even considering the downpoints, the game really does deliver a solid action-adventure experience. 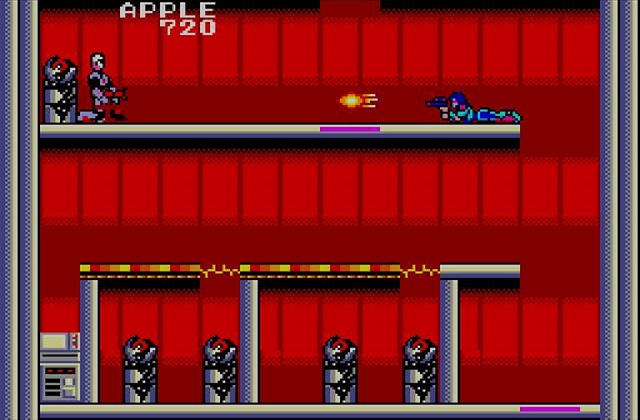 Zap 'em with Zillion
I've always heard that Zillion is the Master System's answer to Metroid. I won't really go out on a limb and say that Zillion does hold up to such a gaming classic, but I will say that Zillion is a pretty good game and probably the closest thing you will get to that type of gameplay on this system (with noticeable differences). Navigating the labyrinthine base, finding my companions, and powering-up my heroes were all things that appealed to me and great fun. It did take me a bit before I started having fun though. Getting used to the controls (jumping over some of the mines is just frustrating) and the somewhat bland look of the game were probably the two most restrictive factors there. After getting over that initial hump, I really did enjoy my overall experience with Zillion. I'd recommend this game to all Master System fans, but I think that it would especially appeal to more experienced gamers with its length and requiring a bit more mentally than some of the more simple, but fun, titles out there.

Zillion is a 3.5 / 5, for being solid action-adventure experience with a large, complex base to adventure through while having some minor, but noticeable, flaws.
4/5

If you enjoyed this Zillion review, you're encouraged to discuss it with the author and with other members of the site's community. If you don't already have an HonestGamers account, you can sign up for one in a snap. Thank you for reading!

© 1998-2020 HonestGamers
None of the material contained within this site may be reproduced in any conceivable fashion without permission from the author(s) of said material. This site is not sponsored or endorsed by Nintendo, Sega, Sony, Microsoft, or any other such party. Zillion is a registered trademark of its copyright holder. This site makes no claim to Zillion, its characters, screenshots, artwork, music, or any intellectual property contained within. Opinions expressed on this site do not necessarily represent the opinion of site staff or sponsors. Staff and freelance reviews are typically written based on time spent with a retail review copy or review key for the game that is provided by its publisher.