A Piece of History
It is time to reach back...back to a time where games could break the mold and do something so revolutionary that, not only had it never been done before, but it influenced all those to follow it. Not many games can claim to be the first to do something like this, but King's Quest can. King's Quest was originally a PC game released in 1983 and the first adventure game to feature graphical animations. If you bowed to the king, you actually saw your hero bow! While it seems simple, it had never been done before, and is a standard baseline nowadays. Fast forward several years, and King's Quest: Quest for the Crown is released on the Sega Master System (SMS) as one of the system's few pure adventure games. This is a simplified port of the original title that seeks to introduce that piece of history to console gamers! 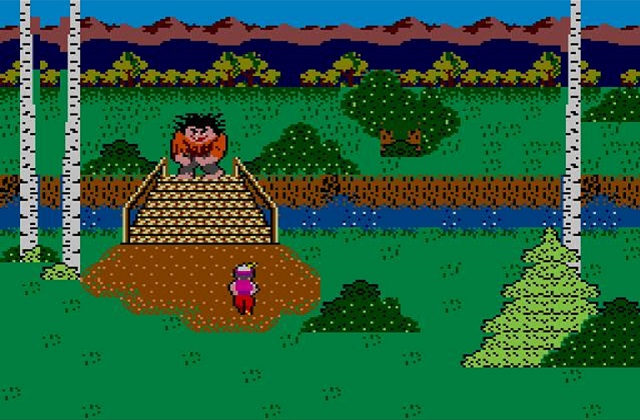 Fairy Tales, Fables, and Deaths...Oh My!
King Edward the Benevolent has called upon you, Sir Graham, to save the kingdom. You have to recover three mystic treasures to save the kingdom and prove yourself worthy of the crown. The story takes place in the midst of ancient fairy tales and fables, so expect a lot of references to classics like Rumpelstiltskin and Hansel and Gretel. You'll encounter magic beings like trolls and dragons, and can do things like grow a giant bean stalk. To play the game you can press button 1 or 2 to bring up two different command lists. One command list is a set of general actions for all screens (like swim, climb, or look around), while the other list allows you to interact with objects on the screen or in your inventory. The core gameplay centers around the standard adventure affair of that time, which requires you to gather different items, interact with the environment, and solve some creative puzzles. Out of everything, solving the puzzles is the primary focus...and it causes a LOT of frustration. Sometimes you are missing a key item (or items) needed to solve the puzzle. Sometimes you have the item but don't know to use it or how to use it. Sometimes you just have no idea where to start or what to do. One of the reasons for this is that the game draws heavily from classic fairy tales...so, if you lack the knowledge of some of those, you can find yourself hopelessly lost. What this means is that gamers will either be eternally stuck or will have to use a guide...which destroys one of the core points about the game. These infamously dastardly puzzles really throws gamers off, so much so that, instead of encouraging creativity and problem solving, they simply increase frustration and your desire to use a guide as the "easy way out." However, a good point is that most of the puzzles have a couple of alternate ways to solve them, which is neat and increases the likelihood that a player finds a way to solve them on their own.

Another infamous downfall to King's Quest is the fact that it turns out to be a quest for death...you die. A lot. This may not have been a bad thing if the deaths weren't so cheap...but the fact that one of the deadliest obstacles you will encounter is...a staircase (not joking)...means that a lot of the time you die ends up being eternally exasperating. Everybody expects to die when you run into a dragon, but when you die from dropping into a stream (when you can swim in the lake just the next screen over), is absurd. Or, how about when you push a rock on top of yourself and commit apparent suicide. Who would do that?!? One of the other sad things about this port is that it is bugged. A couple of times the game completely goes haywire if you encounter your Fairy Godmother from the wrong direction. They also took out some important functions...like the save feature. In this version you have to write down a lengthy password in order to save your progress, which is always tedious, and it's baffling considering that the technology for cartridge saves was available at that time. Since you will be dying a lot, expect to waste a lot of scratch paper. The audio in this game is on the borderline between bare bones and nonexistent. Finally, the important key that really set King's Quest apart from other games, graphical animation, has been stripped from all of the key sequences in the game. Your character, Graham, is animated. However, when you defeat the dragon, send the leprechauns into a dancing frenzy, or send a billy goat to butt a troll off a bridge all you get is a text box...no animation to show you what happens. If you feel robbed, you should. 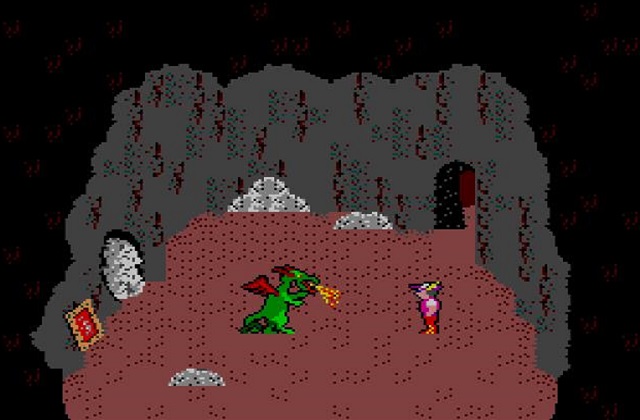 A Quest Nobody Wants to Take
The King's Quest series was something that I've heard about, but never played, nor knew much about. Unfortunately, this game was my first encounter with the series. In one respect, it is a bit easier since you are directly told the items you can interact with and the commands available rather than having to try different things on your own. On the other hand, that sense of exploration is almost entirely eliminated, especially considering that the ability to look at objects and get some description or comment, is, for the most part, removed from the game. This is a bare-bones port featuring nothing but what was absolutely necessary. There are little to no animations. Little to no sounds. Little to no fun. Being someone who wasn't really up-to-date date on my fables, I found the puzzles so mystifying as to be prohibitive and eventually gave up and had to use a guide...which ended up stealing a lot of the experience away. The truth is that the game needed to feature some updates in the port to keep up with the times, unfortunately it actually LOST features in the transition. It does hold as being a unique experience on the console and allows gamers to play one of the more influential titles for its time. However, this game will only really appeal to a very niche audience that wants to play an old school adventure game on the Master System console.

King's Quest: Quest for the Crown is a 2 / 5, for being a stripped down port that both fails to keep up with the times and doesn't hold true to what made the original so good.
2/5

If you enjoyed this King's Quest: Quest for the Crown review, you're encouraged to discuss it with the author and with other members of the site's community. If you don't already have an HonestGamers account, you can sign up for one in a snap. Thank you for reading!

© 1998-2020 HonestGamers
None of the material contained within this site may be reproduced in any conceivable fashion without permission from the author(s) of said material. This site is not sponsored or endorsed by Nintendo, Sega, Sony, Microsoft, or any other such party. King's Quest: Quest for the Crown is a registered trademark of its copyright holder. This site makes no claim to King's Quest: Quest for the Crown, its characters, screenshots, artwork, music, or any intellectual property contained within. Opinions expressed on this site do not necessarily represent the opinion of site staff or sponsors. Staff and freelance reviews are typically written based on time spent with a retail review copy or review key for the game that is provided by its publisher.