Persona 4: Dancing All Night is yet another Persona 4 spinoff that takes place in the same summer as the ending of Persona 4 Golden. Apparently, those new looks everyone had in the epilogue lasted for about five minutes (this is actually explained in the Story mode, though why Rise's Persona reverted back to its original form after Arena Ultimax still remains a mystery).

Chronologically, Dancing All Night is the last game in the series, at least so far. Party member and pop star Rise is planning her big comeback after a long break spent fighting crime, and she has enlisted all of her friends to act as her backup dancers for her first big show. As always, it's not long before our beloved Investigation Team finds itself in a strange world full of weird monsters, bizarre backgrounds, co-dependence, and navel gazing. How characters perceive themselves versus how the world perceives them is a central theme of the entire series, and it's hard at work here. 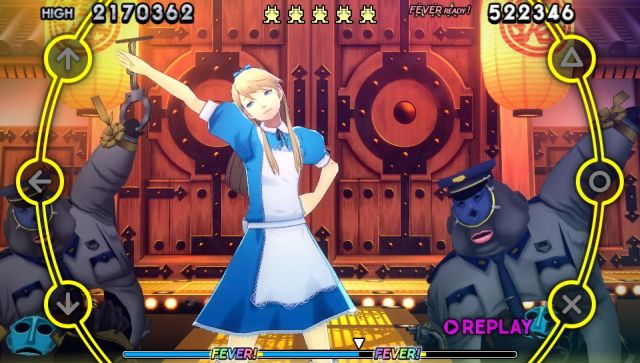 With the focus on Japanese teen idol characters, the true self theme has never been more relevant. This time it's mostly new characters who do the introspecting, so it's not just the cast of Persona 4 making the same self-discoveries for the fourth time, thankfully. The story itself is presented as a visual novel, just like in the Arena games, and it takes a long time to get started. Once it finds its groove, though, it moves along at a decent pace. There are enough twists and OK (not great) new characters to keep things interesting to the very end.

Each song in Dancing All Night is performed by a specific character, and usually another character can join in if you're performing well enough at certain points in the process. The idea of expressing yourself through dance comes up often in the story, and the varied dance styles among the characters play into this well. Yukiko's elegant spins fit her personality to a "T," as do Kanji's violent flails. Tragically, Naoto only vogues during the opening cutscene. I would have been perfectly happy just watching her vogue all the way through all of her songs, no foot movement required. 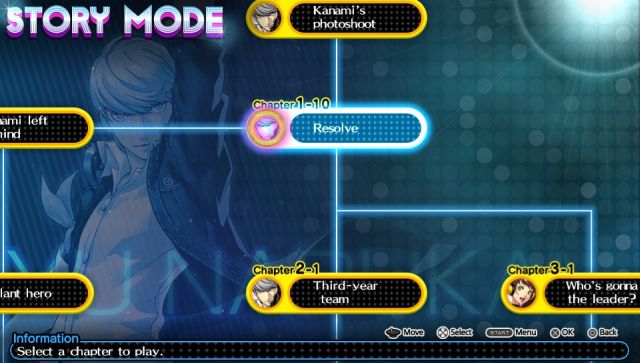 Playable characters include the Investigation Team members from the original Persona 4, cute little cousin Nanako, and newcomer Kanami. Kanami is an up-and-coming pop star, and a key figure in the game's Story mode. She has a pleasant demeanor and is a bit spacey. Mostly she's inoffensive, except for her terrible design. Though she has three costumes to choose from, they're all hideous. Her default costume looks like the bride of Ronald McDonald. She can also wear a ridiculous bikini if you want to ogle her 15-year-old boobs. Her slob costume would be tolerable, perhaps even endearing, if only she weren't wearing Crocs. Sorry, but those are unacceptable in any scenario. Other character designs, at least, are much better. Returning characters use tweaked versions of their traditional designs that look a bit flashier for the dance stage, and many of their costumes from Persona 4 and Golden are available as unlockables. Backgrounds are just as surreal and eye-catching as you've come to expect from the series.

All this flash and style distracts a little from the appropriately simple-but-challenging gameplay. Beat markers fly towards the edges of the screen and are hit with one of the three face buttons or one of three directions on the d-pad. Certain markers require you to hold a button, or hit two buttons at once. It's pretty standard stuff for rhythm games, and that's fine; there's no need to reinvent the wheel. It's important that the controls for this type of game be intuitive, and though it took some getting used to, I had a lot of fun once things clicked. The act of playing is more fun at higher difficulties, with faster and more complicated beat sequences, but the harsh penalties for mistakes on Hard and All Night difficulties drag the experience down a bit. A few mistakes will be enough to prevent you from clearing the song, even if it seems like you're doing pretty well overall. A lower score would have been enough of a penalty for me. 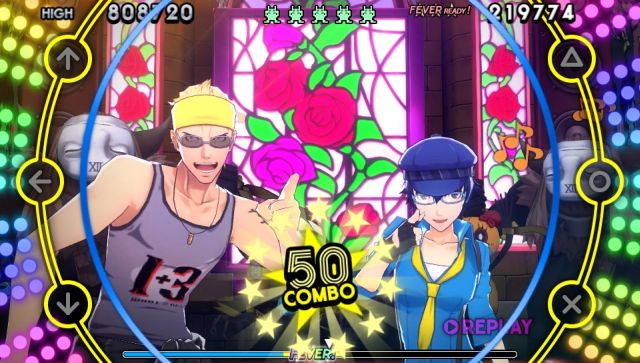 Another thing I could have done without was the constant chatter. Someone important at Atlus must think that constantly hearing the characters talk to each other is a fundamental part of the Persona experience, because these guys never stop cheering each other on. Sometimes it gets to the point where you can't even hear the song over all the yammering. It's a good thing you can turn the voices down or off, or the game would be much more annoying.

Over 25 songs are included in the game, along with a selection of free and paid DLC songs. Most songs are remixes of tunes from Persona 4 and its spinoffs, with a couple of original tracks thrown in besides. Persona 4 is known for, among other things, the quality of its soundtrack, but apparently it's not strong enough to carry a music game without including multiple mixes of the same songs. It would have been much nicer to have some Persona 3 songs and mixes than two versions of songs like "Heartbreak, Heartbreak," or a remix of "Pursuing My True Self" that sounds barely any different from the original which is also included, along with a third (admittedly excellent and different-sounding) mix of the same song. This would be difficult to overlook if almost all of these songs weren't so great to begin with. 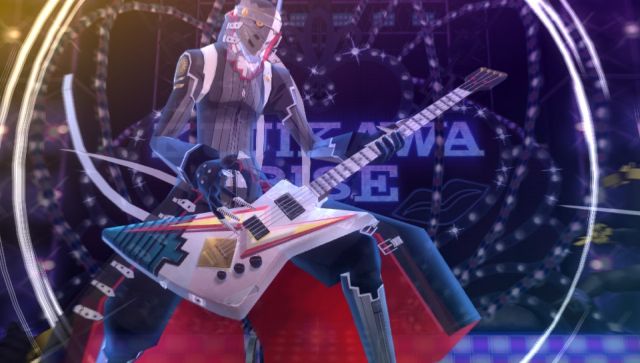 With a few exceptions, DLC songs don't feature any actual dancing, just note markers over background videos. Of course, the quality of DLC songs varies by song. I advise checking them out individually before you buy them. Incidentally, out of the selection of DLC songs Atlus sent us to try out along with the content included with the main game, the single best and worst of the bunch are both available for free at launch.

I'm not sure how Atlus manages to keep spinning Persona 4 off into random genres and pulling it off while somehow maintaining much of the feel of the original RPG. I don't know if anyone was expecting Dancing All Night to be anything more than a competent rhythm game with a Persona skin, but it's actually quite a bit of fun and feels uniquely Persona. Dancing All Night is enjoyable enough to make me return to it even after finishing this review, so consider that high praise indeed.
4/5

If you enjoyed this Persona 4: Dancing All Night review, you're encouraged to discuss it with the author and with other members of the site's community. If you don't already have an HonestGamers account, you can sign up for one in a snap. Thank you for reading!

© 1998-2020 HonestGamers
None of the material contained within this site may be reproduced in any conceivable fashion without permission from the author(s) of said material. This site is not sponsored or endorsed by Nintendo, Sega, Sony, Microsoft, or any other such party. Persona 4: Dancing All Night is a registered trademark of its copyright holder. This site makes no claim to Persona 4: Dancing All Night, its characters, screenshots, artwork, music, or any intellectual property contained within. Opinions expressed on this site do not necessarily represent the opinion of site staff or sponsors. Staff and freelance reviews are typically written based on time spent with a retail review copy or review key for the game that is provided by its publisher.