There's one thing in videogaming that I had always been disappointed with and that's playing a game that I myself had already owned on the same system twice with minor improvements. That's just what Mortal Kombat II for the Sega 32X was, always will be, and is always going to be. The problem with MKII on the Sega 32X is not because of its price, its quality, or that it's an almost perfect port of the Super NES version (sorry it doesn't come anything as close to the arcade game) but that it's the same exact game that I already owned on my Sega Genesis. Did I really screw up for buying two hardwares just to play the same game twice?

Compared to the Sega Genesis version of MKII, it fares a lot better; the colors of every backgrounds have a higher contrast and often boast more details such as in the Wasteland and the Tower. Also a few animations were also given to other background characters such as the flying shadow priests at the Tower and Portal stages or Hornbuckle and Blaze at the Pit II stage. There's also minor animation given to some characters such as Shang Tsung's new laughing win animation and Cage's win pose. All nine arenas from the Super NES version are in this game including both the Goro's Lair and the palette swap blue Portal for the hidden characters. As compared to the arcade, the story intro is the only thing arcade accurate about the graphics in this game, the rest are just Genesis updates but they are good, though compared to visual spectacles of the SNES and arcade, they aren't that much of an improvement despite the fact that they are supposed to be 32-Bit visual. 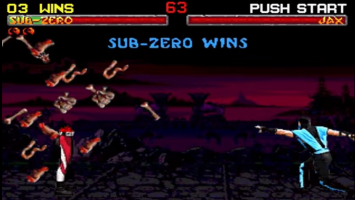 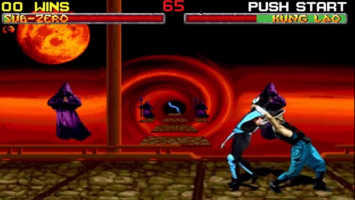 Sadly, the game sounds almost exactly as it did on my copy of MKII for the Sega Genesis without the used of the Sega 32X. From the flowing drip of the Dead Pool theme to the silent crowd of Kahn's Arena, the music quality in this game is quite disappointing considering they are just the same found on the weaker version. There's nothing wrong with sharing music tracks from each version, but knowing that this game doesn't improve upon itself makes it feel rush and lazy. Though I do applaud the developer for bringing back the name shouts and in-game encouragements from Shao Kahn and Forden as well as all the character's correct screams and shouts for this version.

If don't already know the rules of this game yet, then here's the thing: you choose a fighter out of the twelve already available, you enter a tournament through a series of battles against many CPU opponents and fight your way to the top until you face the final three bosses. It's simple and challenging but rewarding, you will also get a ton of chances to spare or brutalize your opponent in different ways before your finale. If you are playing this game with a three buttons controller, you're fated to struggle; three buttons isn't enough to master this game. But if you got the much better six buttons controller, you'll be an expert in no time. The A.I. in this game like every other versions of MKII are average at best and some could be cheap at times but practice makes perfect and once you learn their pattern or find their weaknesses, you'll gain control of victory soon enough. Besides fighting against the CPU, you could also invite a friend or rival to join you in one-on-one combat to settle your score for supremacy or just for fun and unlike the disappointing Sega CD version of the first MK, this game is now in cartridge form so you'll be treated to a load free game. 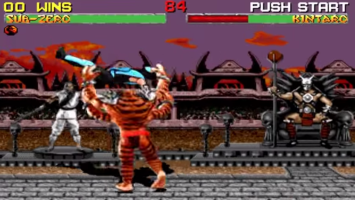 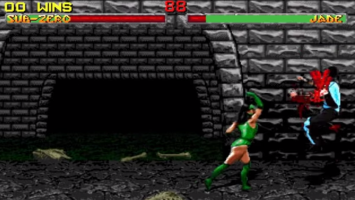 There's so little difference between the 16-bit and 32-bit versions they're more or less the exact same game with the exact same features except one slightly advanced graphics and holds some minor features over the other. I wish I could put this Sega 32X port of MKII in the same league as the SNES or arcade version but as I play it more and more, I began to feel like I'm playing the same Genesis version just with better stuff. Of course, if you are an Mortal Kombat fan this game is great for your collection, also if you had a choice between this and the Genesis port, I say get this one since it not only plays better but had better qualities; however, if you had to choose between this and the SNES port, I had to say go with the SNES version since at least on that version it already looks, sounds, and plays close to arcade perfect and doesn't really require having two hardwares to connect to be able to experience it.
2/5

If you enjoyed this Mortal Kombat II review, you're encouraged to discuss it with the author and with other members of the site's community. If you don't already have an HonestGamers account, you can sign up for one in a snap. Thank you for reading!

© 1998-2020 HonestGamers
None of the material contained within this site may be reproduced in any conceivable fashion without permission from the author(s) of said material. This site is not sponsored or endorsed by Nintendo, Sega, Sony, Microsoft, or any other such party. Mortal Kombat II is a registered trademark of its copyright holder. This site makes no claim to Mortal Kombat II, its characters, screenshots, artwork, music, or any intellectual property contained within. Opinions expressed on this site do not necessarily represent the opinion of site staff or sponsors. Staff and freelance reviews are typically written based on time spent with a retail review copy or review key for the game that is provided by its publisher.