It's always sad when you're enjoying a game and it just kind of falls apart.

I liked Switch Galaxy Ultra quite a bit at first. It opens with a short comic book to introduce you to its story, and it is immediately clear that this is a game with personality. More episodes in the life of main character Vince Vance are revealed through subsequent comics that are unlocked as you play, and in a surprising twist for a comic found in a video game, they're legitimately good. The art is nice and detailed and the writing is amusing. If you're like me, you'll want to keep playing just to unlock more comics. 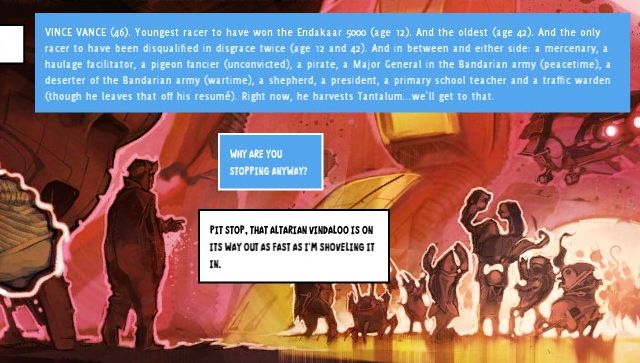 For a while, that seems like a good idea. Switch Galaxy Ultra is a pseudo-racing game. You're not actually trying to beat anyone in particular to the finish line. Rather, your goal is to switch lanes on a space highway to avoid obstacles while gradually gaining speed. Halfway through each level, you'll reach a short stretch with no obstacles and free movement. These areas each contain ten Tantalum orbs. Collect as many as you can and avoid hitting any more obstacles until the end of the course, and you'll get to keep them.

This is all well and good at first. Switching lanes works as a core mechanic, and new obstacles and tools are gradually introduced as you reach new levels. You can upgrade your vehicle, or buy new ones. You'll come across items that allow you to pass through certain colour-coded obstacles, or syphon credits (for buying upgrades) from enemy ships. Branching paths can lead to riches or obstacles, depending on your luck. These elements are introduced gradually as you unlock new levels, which you probably won't do for very long. 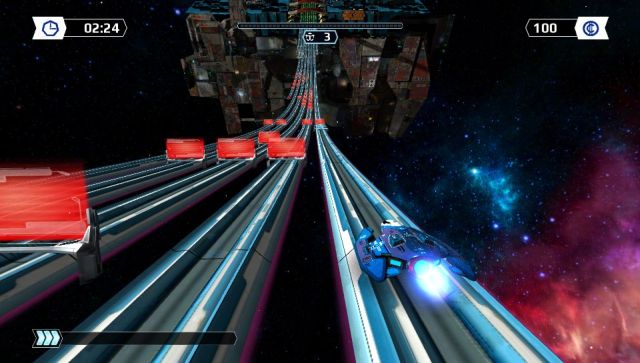 This is where Switch Galaxy Ultra trips over itself. You need Tantalum to unlock new levels. The required amount of Tantalum is low at first. Just playing casually will be enough to get you through the first couple of chapters. Before long, though, you'll start to hit walls. The maximum amount of Tantalum you can get from a single stage is 10 units. To get all 10, you need to play the second half of the stage perfectly. Don't miss a single unit when harvesting them, and don't hit anything on your way to the goal. The amount of Tantalum available is 10 times the number of stages that are open at any given time. This is a problem when you need 150 to progress and there are only 18 playable levels behind you. You'll need to play most of those stages perfectly, or near perfectly, in terms of avoiding obstacles. Your options here are to either play these stages again and again and again, until you are completely sick of them, or play through them once, carefully.

So, you'll start to take your time. Hit the brakes. Don't upgrade your ship. Hit obstacles on purpose early on and don't hit any boosts. Slowly and boringly creep through stages, because otherwise you'll likely never make any progress. This is, of course, not fun at all. You're rewarded with low clear times and credits for going fast, but you're rewarded with actual progress through the game for going slow. 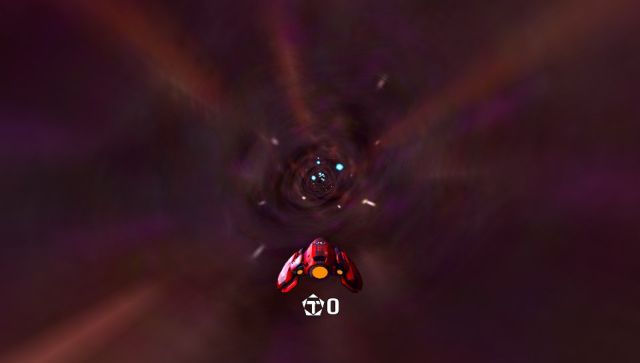 It's frustrating. The game is actually a good bit of fun when you don't have to worry about every little hit you take. The pumping soundtrack and sleek sci-fi visuals are enjoyable and the sense of speed is effective. It's just this one stupid mechanic that brings the entire experience down. Nothing of value would be lost if the Tantalum was removed from the game entirely. Let me focus on speed and clear times. Set a maximum clear time to be met in order to progress. Give me a reason not to drive head first into every wall I see. Early stages give you a taste of what Switch Galaxy Ultra might have been. If only the game wasn't such a strict gatekeeper for most of its content.
3/5

If you enjoyed this Switch Galaxy Ultra review, you're encouraged to discuss it with the author and with other members of the site's community. If you don't already have an HonestGamers account, you can sign up for one in a snap. Thank you for reading!

© 1998-2020 HonestGamers
None of the material contained within this site may be reproduced in any conceivable fashion without permission from the author(s) of said material. This site is not sponsored or endorsed by Nintendo, Sega, Sony, Microsoft, or any other such party. Switch Galaxy Ultra is a registered trademark of its copyright holder. This site makes no claim to Switch Galaxy Ultra, its characters, screenshots, artwork, music, or any intellectual property contained within. Opinions expressed on this site do not necessarily represent the opinion of site staff or sponsors. Staff and freelance reviews are typically written based on time spent with a retail review copy or review key for the game that is provided by its publisher.