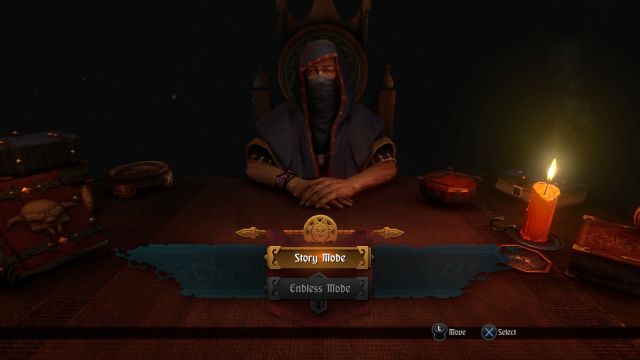 It's always nice when a game comes along attempting something original and pulls it off. Hand of Fate is a retelling of a warrior's life, told through a roguelike where the dungeons are made of face-down cards dealt by a mysterious Dealer. You have some control over the deck, but the experience will be different every time, as is the standard for roguelikes. Each card is an event from the warrior's past, most of which involve making some kind of decision. (A role playing game where you actually get to role play! How novel!) A beautiful maiden may offer you food, health, or a blessing, for example, and you'll have to choose which type of aid you want. You might come across a chasm with a body at the bottom, and you'll have to decide whether to climb down and loot it. Such instances bring up a hand of four cards, some marked with success and some with failure, which are shuffled for you to pick one to determine the outcome of your attempt. One card on each floor is the area's exit, eventually leading to the boss of the dungeon in Story mode, or just deeper floors in Endless mode.

Some events lead to combat, which is, unfortunately, the game's biggest weakness. Combat is borrowed from the Batman: Arkham games and is generally even more shallow here than it is there. You can attack, block/counter, roll, or stun enemies (useful for breaking their guard) and your next appropriate move is telegraphed by a colour-coded symbol above your opponent's head. (Green means block. Red means dodge.) Some weapons have special abilities and you can equip spells with certain effects (such as throwing daggers in multiple directions, or freezing enemies directly in front of you) and those can mix things up a bit, but the basics remain uninteresting. Combat doesn't flow very well, but it's serviceable in that it doesn't drag the overall experience down too much. 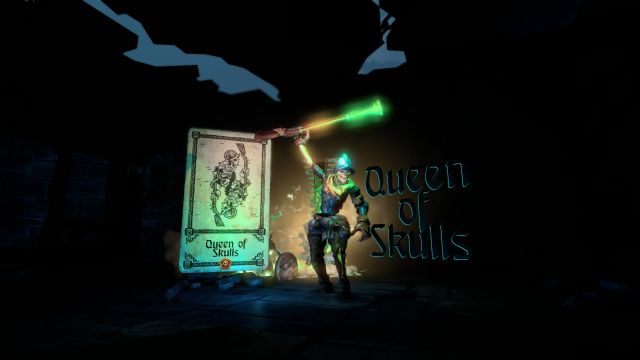 When you combine a roguelike with a deck of cards, the fact that you are ultimately at the mercy of the cards comes as no surprise. You won't always have the opportunity to procure the food you need to keep yourself alive. You might make it through an entire run without finding a shield, which is required for blocking and countering attacks. (You don't start off with one until you've cleared half of the game's levels, which seems like a bad design decision to me.) To a small extent, you can watch the shuffling success/failure cards to make a semi-informed decision on what card to pick, but sometimes the odds are just against you. You'll get lucky as often as you get unlucky, but sometimes all of your good or bad luck comes at once. That's life.

Unlucky runs are made easier to accept by the fact that completing many events for the first time will earn you tokens that unlock new cards. You keep the tokens you've earned whether you win or lose. Cards are used to build your deck for Story mode. You have two decks: one for gear, and one for events. Your gear deck determines which gear has a chance of randomly appearing from events, chests, shops, or what have you. Your event deck determines which event cards will be used as tiles in dungeons. More dangerous events yield more rewards, and tokens earned from new cards encourage you to use most event cards at least once. The Dealer inserts his own cards into the game, however, and those often aren't cards you'll want to run into. 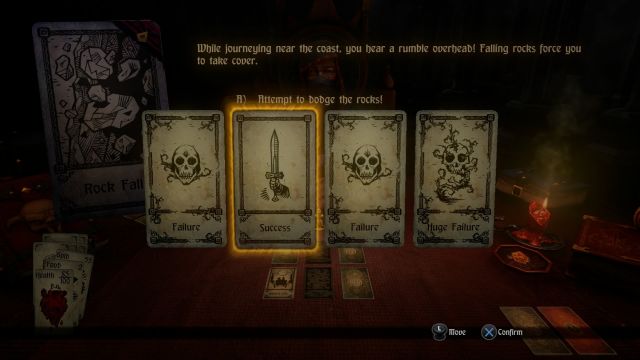 The game's presentation is a bit rough around the edges. Stuttering and screen tearing may drive some players crazy, but the excellent writing and voice acting will make up for the technical hiccups for most. The Dealer is played by Anthony Skordi, who you may recognize as the voice of Leviathan from Mass Effect 3, and his performance is superb. Every line is a treat, even when they inevitably start repeating. Each event card has a scenario written on it. Boss enemies have short biographies. Half the fun comes from discovering new cards so you can read their descriptions and hear what the Dealer has to say about them.

Hand of Fate takes a great idea and executes it well. The combat might be uninteresting, but that's the game's one big weakness. It turns out deck building is the perfect compliment to roguelike gameplay, and while the individual pieces can't stay fresh forever, there are enough of them to keep things interesting for a good while. If you're been looking for something new and original to play, you've found it.
4/5

If you enjoyed this Hand of Fate review, you're encouraged to discuss it with the author and with other members of the site's community. If you don't already have an HonestGamers account, you can sign up for one in a snap. Thank you for reading!

© 1998-2020 HonestGamers
None of the material contained within this site may be reproduced in any conceivable fashion without permission from the author(s) of said material. This site is not sponsored or endorsed by Nintendo, Sega, Sony, Microsoft, or any other such party. Hand of Fate is a registered trademark of its copyright holder. This site makes no claim to Hand of Fate, its characters, screenshots, artwork, music, or any intellectual property contained within. Opinions expressed on this site do not necessarily represent the opinion of site staff or sponsors. Staff and freelance reviews are typically written based on time spent with a retail review copy or review key for the game that is provided by its publisher.