In many ways, South Park: Stick of Truth offers exactly what a game based on that particular license should. Graphics that accurately reproduce cardboard animation? Check. Shameless, vulgar writing? Check. Meta-commentary on pop culture? Again, check. It's basically an interactive episode of the show, which should please fans. Those of us looking for more, however, might not be as thrilled.

The South Park television series is notorious for its contrarian political satire, but Stick of Truth opts to focus on another one of the show's hallmarks: the boys wild imagination. For my money, this is when the show is the most creative and memorable, which makes that approach a perfect fit for the game. 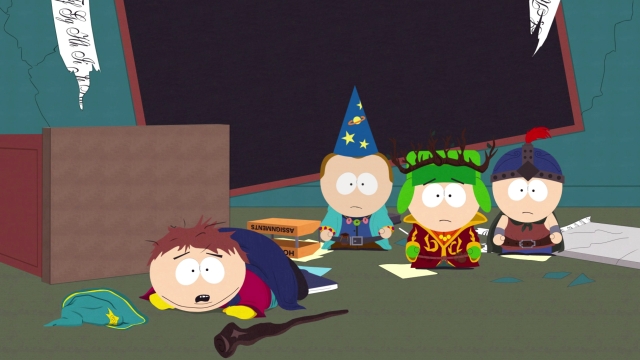 The gist of the story is that the New Kid in town is ordered by his parents to go outside and make new friends. He runs into Butters outside and gets caught up in a live-action roleplaying game that Cartman created. After selecting to play as either a Fighter, Mage, Thief or Jew (seriously), the New Kid goes through some training and helps defend the Stick of Truth from Elves. Of course, the Stick gets stolen and it's up to him to go on a crazy adventure to get it back.

The RPG elements work rather well, allowing players to outfit their New Kid with mod-able weapons and armor, and there is a simple skill system that unlocks and improves special attacks. However, the games low point is the battle system. 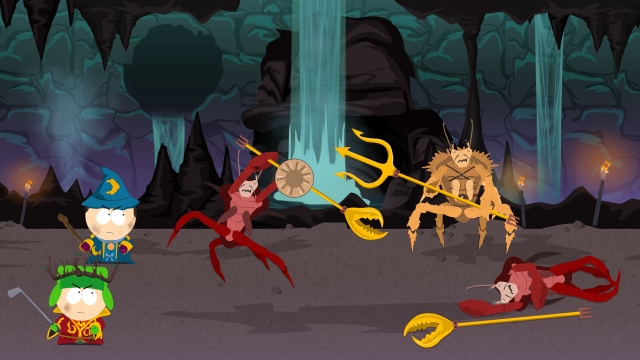 The turn-based combat is fine, but it contains little depth and relies too heavily on QTEs (quick time events). The commands are simple to execute, but they grow tiresome during some of the longer skirmishes. The setup doesn't make things hard or anything, only mildly frustrating. Thats particularly true when a person is trying to master the timing required to execute efficient blocks.

Fortunately, a lot of encounters can be avoided by using elements within the environment to knock-out enemies. Experience is still rewarded, so I used this technique whenever I had the opportunity. Besides, triggering an explosion by farting on a lantern is a lot more satisfying than engaging in another standard battle.

I think I spent more time exploring than anything else, though. I enjoyed strolling around talking to NPCs and taking in all the Easter eggs. It was pretty much a trip down memory lane, thanks to all of the references to past episodes of the show. The developers certainly didn't slouch on the extras, so completionists will find plenty of excuses to continue playing after the credits roll. 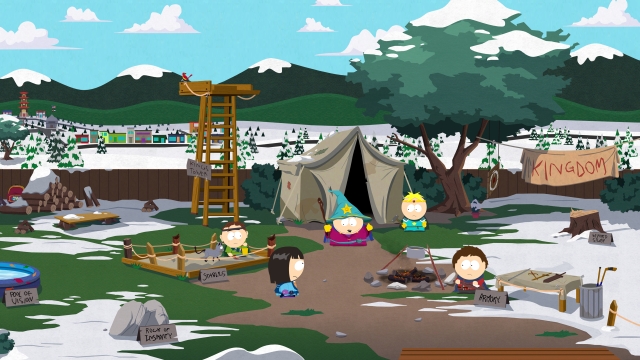 While its not as good as anything you might recall from some of the shows best episodes, the writing in the game is still sharp and deliciously delinquent. Gags like an entire stage set within an anus, and another that finds you playing doctor at Unplanned Parenthood left me wondering how Stick of Truth dodged an Adults Only rating. These moments had me laughing just as much as I was cringing, though, which is exactly what I expect from the twisted minds of Trey Parker and Matt Stone. The comedy does fall flat in places, however, particularly where some of the video game spoofs are concerned. The initial jab mocks the silent protagonist, but that's about as tired as the trope itself. The 8-bit trek through Canada is one of the few moments of good game parody, but that's more of a ribbing against them than it is a solid critique of Dragon Quest.

Stick of Truth isn't exactly the game it should be in an ideal world, but it comes reasonably close. It certainly gets the look and feel of the South Park show down pat, but it lacks in the gameplay department and runs a tad too short at only 10 hours. Overall, it's a fun jaunt through stupidity. Given the nature of the show, I suppose that means it's a success...
3.5/5

If you enjoyed this South Park: The Stick of Truth review, you're encouraged to discuss it with the author and with other members of the site's community. If you don't already have an HonestGamers account, you can sign up for one in a snap. Thank you for reading!

© 1998-2020 HonestGamers
None of the material contained within this site may be reproduced in any conceivable fashion without permission from the author(s) of said material. This site is not sponsored or endorsed by Nintendo, Sega, Sony, Microsoft, or any other such party. South Park: The Stick of Truth is a registered trademark of its copyright holder. This site makes no claim to South Park: The Stick of Truth, its characters, screenshots, artwork, music, or any intellectual property contained within. Opinions expressed on this site do not necessarily represent the opinion of site staff or sponsors. Staff and freelance reviews are typically written based on time spent with a retail review copy or review key for the game that is provided by its publisher.