There is very little to like about Deadfall Adventures. Its a generic first-person shooter with bad voice acting, a boring story line, and almost no redeeming qualities to it. Those moments I did like were still plagued by enough clichés that I had to fight to keep my eyes from rolling every five minutes. Its the worst Indiana Jones game Ive ever played, which is surprising because Indiana Jones isnt even in it.

You play, instead, as James Lee Quatermain, great-grandson of adventurer Allan Quatermain (whom you might know best from his own novels, as well as from his role as part of The League of Extraordinary Gentlemen). I was excited to see what they did with the Quatermain universe, and I quickly found the answer: nothing. You fight Nazis, escort around a bookish and British approximation of a woman, and you search temples for hidden treasures. Along the way, you shoot mummies, solve puzzles, and have to listen to Quatermains agonizingly bad one-liners. 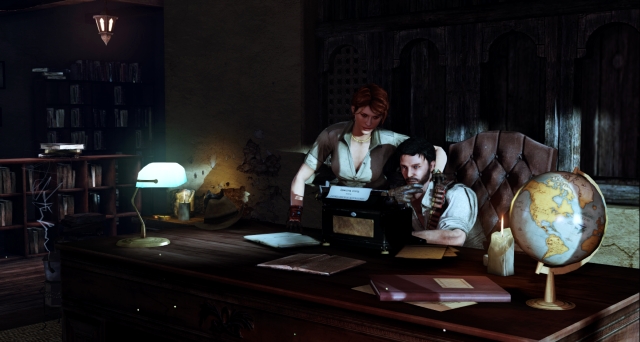 The whole thing felt to me like a knock off of several things. Youre the descendant of a famous explorer and use that famous explorers journal to solve puzzles, exactly like Nathan Drake in the Uncharted series. You have to kill monsters by focusing your flashlight on them, exactly like Alan Wake. And you fight Nazis, ride in mine carts, and wear a fedora exactly like Indiana Jones. Now, I dont mind doing any of these things if theyre at least fun, but the creators seem to have missed the point of all the inspirational media theyre trying to copy.

We didnt play Uncharted or watch Indiana Jones because of journals and Nazis. Our interest was a response to the compelling characters. Nathan Drake could himself be called a knock off of Indiana Jones and Lara Croft, but he also is an interesting character in his own right. He had flaws, he had emotions, and he cared about things. He was driven by something we could understand; he wasnt just going along for the ride because the game made him. He cared, and that helped us to care.

James Lee Quatermain, on the other hand, could not care less about what happens. He really just sounds bored and unaffected as he fires off repulsive quips while killing mummies that, ten minutes earlier, he claimed to not have believed in at all! Im not saying he needs to freak out over every plot twist, but he ought to at least give us some sign that he feels human emotion. 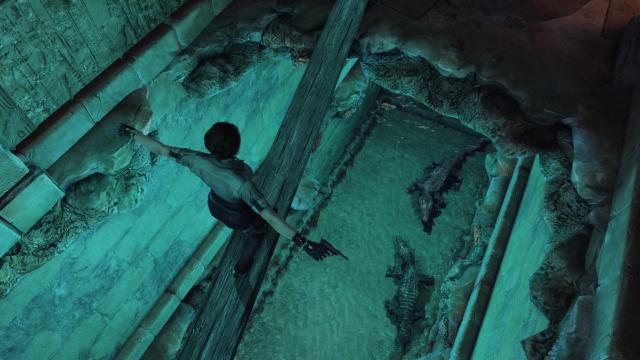 The whole thing came off as a rough draft that nobody went back and revised. The story makes no sense, characters will make choices that follow no logic or reason, betraying one another or aiding one another without even bothering to explain. The gameplay is simplistic and boring in a go there, shoot that kind of way. Even the puzzles, which showed promise, were compromised by bizarre design choices. At times, you are given absolutely zero idea what you are trying to accomplish. Then, as youre trying to figure it out, another character will get in your face and yell the exact solution to the puzzle. Now, I can understand offering a hint, but just straight up telling you what to do takes away the whole point of even having a puzzle. Im surprised Quatermain didnt just throw up his hands and yell, Listen, if youre so smart, why dont YOU handle the puzzles from now on?

Then there was the time I was supposed to save the girl who was being held at gunpoint by one of the games more forgettable villains. The moment I entered the chamber where they both were waiting, he suddenly disappeared and the cutscene consisted of Quatermain untying the girl without the scene even hinting at the villains fate. I would have restarted the section to make doubly sure I didnt miss something, but the thought of enduring once again the insincere cries for help that the girls voice actress managed was more than enough to change my mind. 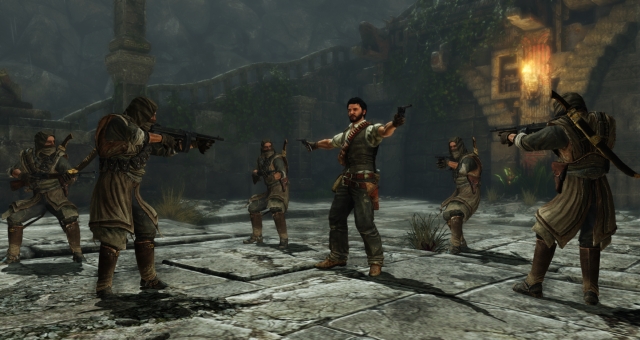 Clichéd and derivative though it might be, the game did the most to make me hate it when it messed up on the finer details. For example, you fight a lot of Nazis (you know, like that Indiana Jones character used to do). The Nazis are referred to as Nazis, they wear Nazi uniforms, and they have very badly impersonated German accents. Why then, when I looked at the red arm bands the Nazis wore, did I find only a simple black X in the middle of the white circle, instead of the Swastika? Youve gone to all the trouble of shoehorning Nazis into a game where they werent needed, developers. The least you can do is get the symbol right! I did some research and could not find any reason why Swastikas would be left out of the Quatermain universe. Was there some sort of play testing where they decided Swastikas were too offensive to display? I was more offended, though, when I was killed by one of those Nazis after emptying a clip into him that, inexplicably, didnt affect him at all. To be killed by a Nazi is one thing, but to be killed by a knock-off Nazi that turned invincible for a few seconds is just depressing.

Deadfall Adventures had promise at times. There are moments when you can use traps to help defeat your enemies by shooting at the right sections, the mine cart sequence would have been fun if it werent so clearly lifted from The Temple of Doom, and some of the puzzles were borderline clever, even if I had to deal with being told the answer if I didnt solve them quickly enough. I will say that at least there were moments of tension bred by a fear of getting my character killed. Not because I cared at all about progressing the story, mind you, but rather because I couldnt bear the thought of repeating a section and hearing the awful drivel from these flat and useless characters for a second time.
1/5

If you enjoyed this Deadfall Adventures review, you're encouraged to discuss it with the author and with other members of the site's community. If you don't already have an HonestGamers account, you can sign up for one in a snap. Thank you for reading!

© 1998-2020 HonestGamers
None of the material contained within this site may be reproduced in any conceivable fashion without permission from the author(s) of said material. This site is not sponsored or endorsed by Nintendo, Sega, Sony, Microsoft, or any other such party. Deadfall Adventures is a registered trademark of its copyright holder. This site makes no claim to Deadfall Adventures, its characters, screenshots, artwork, music, or any intellectual property contained within. Opinions expressed on this site do not necessarily represent the opinion of site staff or sponsors. Staff and freelance reviews are typically written based on time spent with a retail review copy or review key for the game that is provided by its publisher.