Quick Info
Alex Kidd in Shinobi World is a Sega Master System (SMS) single-player platforming game developed and published by Sega in 1990. The game is a blend of two of Sega's most popular franchises at the time, Alex Kidd and Shinobi. It was the last game to feature Alex Kidd, who was Sega's first "mascot" until Sonic the Hedgehog was released. Even though it is the last game to feature Alex Kidd, it is one of the best (and to some THE best) in the series. The colorful visuals, cool moves, and the fact as you play as a NINJA all promote the overall experience of a fun, yet brief, game. 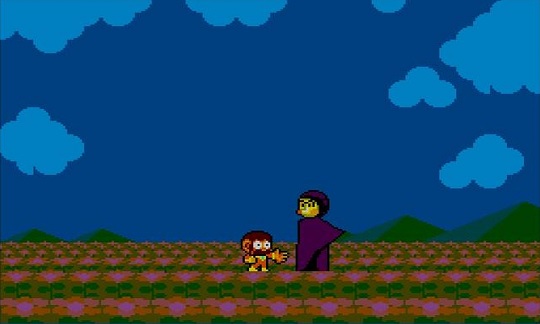 ===> Visuals = (colorful and cartoony) 9/10
The game has comparable graphics to other titles released on the system at the time, but the colorful, cartoonish look contributes well to the overall light-hearted, kiddie feel of the game.

> Graphics / Animation - 9/10
Alex Kidd in Shinobi World may not feature groundbreaking graphics, but they still end up being excellent for its time. The game features a short but neat cinematic intro before the title screen, setting the stage for the gamer. Alex Kidd, himself, looks better than ever before in his black ninja outfit (even though he maintains the noticeably large ears). The enemies and the environments all look nice...filled with a vibrant look that is aided by its cartoonish style. The main downside in this category comes from some of the animations, which appear a bit choppy (such as your main sword-swinging animation). Overall, the game looks great, even outstanding at times, with only some minor flaws.

> Style / Variety - 8/10
The colorful, cartoonish look fits in well with the lighthearted feel of this game. However, there is a noticeable lack of imagination put into some of the environments. There is an urban area, underwater / port area, jungle area, etc...pretty much every standard environment you expect to see in a game. The game only has 4 different levels yet still re-hashes some of the different enemies (and bosses) found in the game (not even having the decency for a palette change sometimes!). However, this doesn't detract much from the game experience since the overall style of the graphics fit in really well with the mood of the game, complementing it perfectly.

> Music - 9/10
Alex Kidd in Shinobi World does feature some remixed tracks from the Shinobi game. However, instead of butchering the classic tunes from the classic title, Alex Kidd in Shinobi World ends up putting an upbeat spin on them that fits in well with the game. All of the music from each level has its own feel that helps enrich the environment Alex Kidd travels through. The only downside is that the boss battle music doesn't really keep with the overall upbeat sound, detracting a bit from the epicness of the fights.

> Effects - 9/10
All of the sound effects do their job in accentuating the action on screen. The fireball sound effect, especially, does a great job in sounding awesome as you spin yourself into a ball of fire and destruction!

===> Storyline = (paper-thin) 5/10
While the first game, Alex Kidd in Miracle World, was ahead of its time as far as the story telling aspect for a platformer is concerned...Alex Kidd in Shinobi World is more par for the course. You get a neat intro before the title screen and a page in the game manual to give you the game's storyline...but other than that the player won't receive any real story progression until the ending screens. As far as the story itself...it is nothing out of this world. A bad guy kidnaps your girlfriend and you have to rescue her...meh. 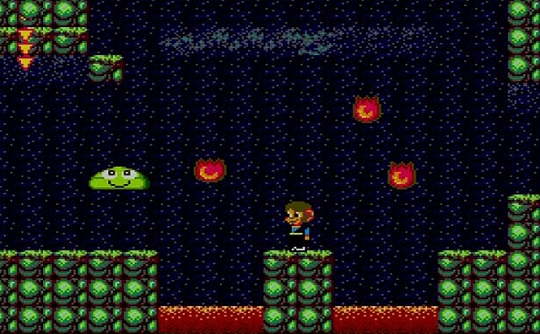 ===> Gameplay = (better than American Ninja...not as awesome as being a ninja) 7/10
Alex Kidd in Shinobi World is basically a kiddie clone of the Shinobi game with Alex Kidd thrown in there. With that being said...it's fun and it works.

> Controls - 10/10
The basic controls for the game are simple, responsive, and intuitive. Button 1 attacks while Button 2 jumps. There are also 3 special moves in the game (called "magic"), which are the fireball (where you spin around a pole rapidly turning into a ball a fire, then fly off), the wall jump, and skipping on water. These are fun but see mostly limited use.

> Design - 7/10
Alex Kidd in Shinobi World takes the basic gameplay of Shinobi and makes it accessible to children. With that, the game is a huge success, but not without flaws. The main flaw in the game is the length...there is none. The game is a short 4 levels that can be beaten in 15-20 minutes. This normally wouldn't be an issue given the correct amount of difficulty, but (as discussed later) the game fails on that front as well. So, what we have is a short but sweet ride with Alex Kidd in Shinobi World. Additionally, the game lacks innovation. While Alex Kidd in Miracle World tried hard to break the mold of the basic platformer, Alex Kidd in Shinobi World not only copies the basic gameplay of a successful franchise...but it fails to offer any real innovations on the basic design of the game. You have 4 levels with 4 end bosses, no power-ups or upgrades, and uninspired enemy design. The boss battles themselves aren't anything too spectacular either leaving a bit to be desired.

To be fair, however, the game isn't totally uninspired. The later stages feature multiple paths the player may travel in order to complete the stage. The fireball move is pretty cool and really fun to perform (who wouldn't want to fly about as a huge ball of fire destroying enemies in their path?). Also, while the basic design lacks innovation...it is proven to work. The game is fun and completing the levels still gives you some satisfaction. I mean, who doesn't like being a ninja and running about killing bad guys with a katana or throwing dart? Overall, there are some noticeable design flaws, but, it still ends up being a solid game with no glaring holes.

> Difficulty - EasyMode
Difficulty? What difficulty? Even though this game is targeting a younger audience, it still fails to uphold a decent level of difficulty that justifies the short game length.

> Fun Factor - 8/10
This game may be short. This game may be easy. But, Alex Kidd in Shinobi World is still a blast to play! Whether it be spinning into a ball of fire, chopping enemies down with your katana, or sending them into oblivion with your throwing darts...you will have a ton of fun navigating through the levels.

> Replay Value - Low
There isn't a lot of reason to play this game after you beat it other than for fun or nostalgia. 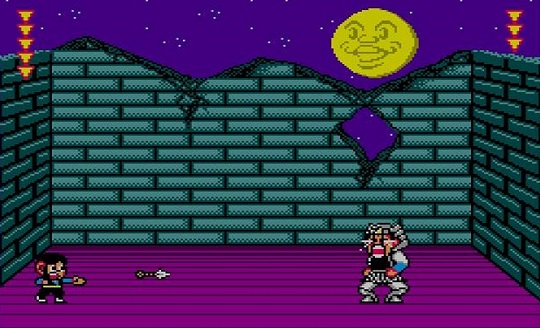 ===> Reviewer Opinion = (surprisingly fun, surprisingly short) 7/10
After playing Alex Kidd in Miracle World, I had high hopes for Alex Kidd in Shinobi World...after finishing the game I have some mixed feelings. The game was really fun, I loved the look and the sound...and had a blast playing it. However, it ended way too soon and didn't pose much of a challenge...leaving me with a bittersweet memory of what should have been a great game...but ends up just being "pretty good".

===> Overall Impression = (Alex Kidd went out with a BANG!) 8/10
After the first game, the Alex Kidd series really went downhill. Sega seemed to stuff him in oddball games where he didn't necessarily belong and nothing Alex Kidd was in seemed to stack up to the original. Finally, Sega brings back Alex Kidd for his last go around and desperately stuffs him in a Shinobi clone...and it worked! While most people will still hail Alex Kidd in Miracle World as the definitive title...Alex Kidd in Shinobi World is no slouch. It delivers a fun platforming game experience with a catchy soundtrack and colorful, cartoony visuals. While the game is great to play, most importantly it allows Alex Kidd to leave the gaming world with a final, respectable title under his belt. RIP Alex Kidd!
4/5

If you enjoyed this Alex Kidd in Shinobi World review, you're encouraged to discuss it with the author and with other members of the site's community. If you don't already have an HonestGamers account, you can sign up for one in a snap. Thank you for reading!

© 1998-2020 HonestGamers
None of the material contained within this site may be reproduced in any conceivable fashion without permission from the author(s) of said material. This site is not sponsored or endorsed by Nintendo, Sega, Sony, Microsoft, or any other such party. Alex Kidd in Shinobi World is a registered trademark of its copyright holder. This site makes no claim to Alex Kidd in Shinobi World, its characters, screenshots, artwork, music, or any intellectual property contained within. Opinions expressed on this site do not necessarily represent the opinion of site staff or sponsors. Staff and freelance reviews are typically written based on time spent with a retail review copy or review key for the game that is provided by its publisher.