Lunar Pool was released in 1987 on the Nintendo Entertainment System and re-released for the Wiis Virtual Console in 2007.

As a billiards video game released in 1987, Lunar Pool must have served as a respectable simulation for what it was trying to accomplish. Today however, the game feels more like a puzzle game by bombarding players with rather strange looking tables with portals to pocket balls into. The game has three modes, single player, two player and a vs. the computer mode. Single player is composed of 60 different tables. In order to beat a table the player must pocket each of the six other balls on the table. The game offers a surprising amount of stages each more bizarre than the last (some of the early stages can be observed below). Two player mode consists of the same gameplay but pits players against each other to see who can score the most balls in. Player one goes first while players two always follows and both players work towards pocketing the same 6 balls on the table. 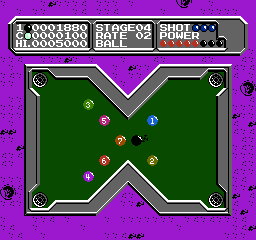 The difficulty of Lunar Pool is surprisingly high, which is why I personally see it as a puzzle game. The player has a total of three cue balls with each cue acting as a life. Since there are a total of 60 levels, players should grow accustomed to the idea of starting over from the very beginning should they lose all their lives. The difficulty is definitely something that can be overcome however. In order to excel at Lunar Pool players need to remember their strategies for pocketing each ball so that every play through rewards them with getting closer to the last stage. It is a rewarding system for players with lots of patience and time on their hands. Others however, might not be so inclined to give Lunar Pool a chance after seeing the game over screen time and time again. It should be noted that the vs. computer mode is even more difficult to win. The computer in this game always seems to pocket the balls, even if solutions are not clear to the player. Playing this mode may discourage some players as it seems that the computer has a greater advantage over the player. 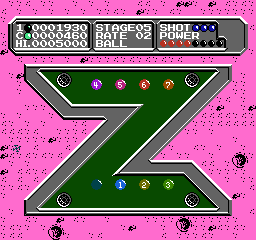 The presentation in Lunar Pool is clean and to the point. Each table is surrounded by terrain that looks somewhat like the Moon. The tables themselves are green allowing for each ball to be seen perfectly and without any visual interference. Players move a cursor around the ball that shows where the ball is headed. Left and right on the D-Pad move the cursor 360 Degrees around the cue ball while the up and down buttons on the D-Pad make the cursor move farther or closer to the cue ball, allowing players to see where the ball is going in farther distances.

The music in Lunar Pool is not so great. While the title screen has a great melody the rest of the game has a small sound clip of about 15 seconds looping over and over. This can certainly get on some player's nerves. While the sound clip is not very invasive and actually provides a cool ambiance centered on the moon, the constant looping can be a bit too much. This is especially true in later stages, after a player has been listening to the same 15 second clip for more than ten minutes. The sound effect used for cursor movements is also rather ornery. The sound resembles a high pitched chirp. While this may seem like a trivial complaint, players should understand that the cursor moves only a small way every time the D-Pad is pressed, this means that moves requiring the player to position the cursor on the other side of the cue ball will cause the cursor to make the high-pitched chirp countless of times--and this happens every single time that the cursor needs to be moved. These issues can be fixed rather easily nonetheless, with players lowering their TV volume or simply listening to their own music.

Lunar Pool comes as a hard recommendation. The majority of players may brush off the game as hard or antiquated. Others however, may find a long and challenging puzzle game wrapped around the rules of pool. The music in the game is certainly nothing to get excited about but the games clean presentation allow the gamer to always see what is going on without any visual interference. True hardcore-classic gamers may find something to keep them entertained here, but most players enjoyment will be detrimental by the archaic gameplay. I personally give Lunar Pool a 6/10.
3/5

If you enjoyed this Lunar Pool review, you're encouraged to discuss it with the author and with other members of the site's community. If you don't already have an HonestGamers account, you can sign up for one in a snap. Thank you for reading!

© 1998-2021 HonestGamers
None of the material contained within this site may be reproduced in any conceivable fashion without permission from the author(s) of said material. This site is not sponsored or endorsed by Nintendo, Sega, Sony, Microsoft, or any other such party. Lunar Pool is a registered trademark of its copyright holder. This site makes no claim to Lunar Pool, its characters, screenshots, artwork, music, or any intellectual property contained within. Opinions expressed on this site do not necessarily represent the opinion of site staff or sponsors. Staff and freelance reviews are typically written based on time spent with a retail review copy or review key for the game that is provided by its publisher.