The Shin Megami Tensei series is a multifaceted franchise with a game to please everyone: Persona for the dating sim fanatic, Devil Survivor for players looking for a monster-raising element, and Digital Devil Saga for those players who appreciate a gripping yet bizarre narrative. Shin Megami Tensei: Devil Summoner - Soul Hackers borrows many of the same elements from previous MegaTen games to craft a decidedly different experience, complete with demon summoning, virtual reality, and conspiracies. This enhanced port of the original Sega Saturn release from 1997 exhibits an abundance of charm and personality. But just like the previous DS release, Shin Megami Tensei: Strange Journey, it may be too niche to catch on with an audience beyond hardcore devotees. With that said, it features the same masterful blend of mature dialogue, drama, and character development MegaTen fans are familiar with, and it offers a rousing role-playing adventure for those willing to take the plunge.

A dated version of the early 2000s is the landscape on which Soul Hackers has been painted, which allows for a simultaneously futuristic and retro aesthetic. Corporations are in complete control of cities, citizens are able to explore the internet by way of MMO-like constructs, and teenage hacker groups (such as the Spookies, which the main character is a member of) hold scary amounts of power. What's more, they're able to summon and control demons and have no qualms about battling for supremacy over the citizens. 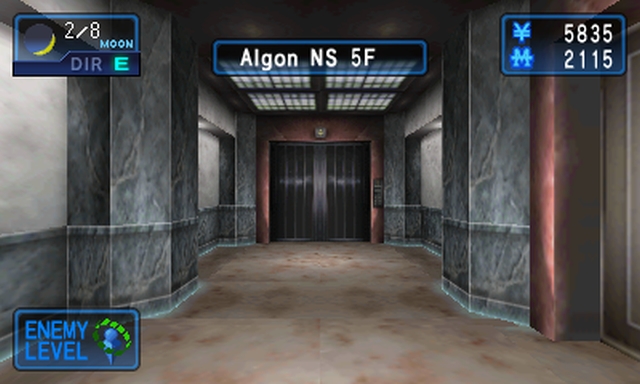 The Spookies find themselves embroiled in a conflict between the corporations and some particularly shady business that unfolds throughout the length of the game. Those are the least outlandish parts of the narrative. It gets much crazier from there, but that's part of what makes Soul Hackers such a wild ride.

Despite being billed as a traditional JRPG, Soul Hackers feels like anything but. Exploration is relegated to a relatively closed off map dotted with predetermined destinations. NPCs are marked as nondescript icons and there's little reason or ability to travel off the beaten path. Dungeons and other structures are traversed via first-person view, with basic 3D-rendered environments and a 2D- map to guide you. Important landmarks such as objectives, stairs, and saving/healing rooms are generally marked on said maps, but enemy encounters are random.

Defending yourself relies on a combination of smart attacks, defense, and spellcasting as well as your ability to command the squad of demons you'll acquire over the course of the game. Skirmishes play out in a very simplified turn-based manner, with a variety of bizarre enemies and monsters popping up around every corner. Enlisting demons to fight on your side is a fulfilling exercise, but there aspects of the game that aren't so straightforward. Soul Hackers, like many MegaTen adventures, has a tendency to layer on additional mechanics, currency systems, and regulations without first properly explaining them.

For instance, the MAG system may confuse players who've never dabbled in the game universe, and as a result they may find themselves at a loss when attempting to figure it out. To be fair, it's a much more austere setup than what gamers who usually gravitate to RPGs may be familiar with, but it's similar to systems seen in other MegaTen games. The concept is simple: walking, summoning, and various other actions consume MAG, while you can gain it back by participating in battles. There's a constant balance that must be struck between MAG expenditure and gain, and it has the potential to be very confusing and intimidating for players already turned off by the game's various oddities. 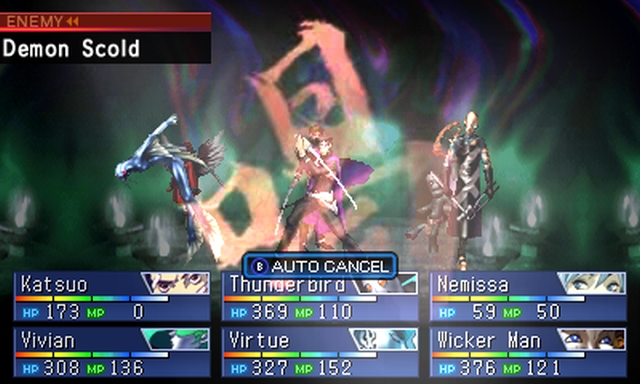 While some aspects feel obtuse, though, there are so many others that add to the quirky appeal of Soul Hackers. Examples include the excellent voice acting and even the inclusion of the original CG segments that look laughably bad by today's standards, but which fit the game's setting in ways that couldn't have been predicted back in the '90s. The sharp character portraits and smart writing offset the low-quality, outdated content back from the '90s and create a pleasantly bizarre atmosphere draped around what feels like a hardcore RPG all decked out in the familiar trappings of the MegaTen franchise. There's an expansive story to unfold, and plenty of demons to acquire. If you're willing to put in the work and understand some admittedly dated features, there's a great time to be had here.

Aside from the choppy CG and drab first-person environments, the game looks great and sports a fairly memorable soundtrack supplemented by excellent voice acting. The only irritating aspect happens to stem from the fact that even though you can change your name and are of ambiguous gender, Soul Hackers' characters refer to you with male pronouns only. It's jarring, and more than a little presumptive. If the cast isn't going to voice a particular name, why assume all players are male? The MegaTen games are usually quite inclusive, so this was a strange design choice that could easily have been avoided.

Pitfalls aside, Shin Megami Tensei devotees should find plenty to love about Soul Hackers, from its menagerie of demons and decadent weirdness to its classic RPG goodness. It does take a bit of getting used to, so it'll likely really only appeal to the MegaTen faithful, but if you're looking for something a little different, this should fit the bill perfectly.
4/5

If you enjoyed this Shin Megami Tensei: Devil Summoner - Soul Hackers review, you're encouraged to discuss it with the author and with other members of the site's community. If you don't already have an HonestGamers account, you can sign up for one in a snap. Thank you for reading!

© 1998-2021 HonestGamers
None of the material contained within this site may be reproduced in any conceivable fashion without permission from the author(s) of said material. This site is not sponsored or endorsed by Nintendo, Sega, Sony, Microsoft, or any other such party. Shin Megami Tensei: Devil Summoner - Soul Hackers is a registered trademark of its copyright holder. This site makes no claim to Shin Megami Tensei: Devil Summoner - Soul Hackers, its characters, screenshots, artwork, music, or any intellectual property contained within. Opinions expressed on this site do not necessarily represent the opinion of site staff or sponsors. Staff and freelance reviews are typically written based on time spent with a retail review copy or review key for the game that is provided by its publisher.