Hyperdimension Neptunia Victory is the third game in the Hyperdimension Neptunia series from Compile Heart. Like its predecessors, the new installment takes place in the world of Gamindustri. As the name suggests, Gamindustri parodies the real gaming industry that we know and love. It is comprised of four nations, with each representing one of the major gaming powerhouses: Leanbox (Microsoft), Planeptune (Sega), Lastation (Sony) and Lowee (Nintendo). The ruler of each nation is a CPU that is tasked with keeping the peace and making sure the residents are happy. However without any major conflict since the last game, the four CPUs have spent most of their time playing video games and relaxing.

This all changes when the CPU of Planeptune, named Neptune, is sent to an alternate universe where the nations are younger and less peaceful. Neptune soon finds herself meeting familiar faces in the alternate Gamindustri. This in particular provides a lot of great moments that explore the numerous ways in which the characters differ between the two universes. The storyline in the game largely mirrors the 1990s console wars, which in this case are being caused by the mysterious Seven Sages. Neptune is tasked with both stopping the Seven Sages and returning to her own world. 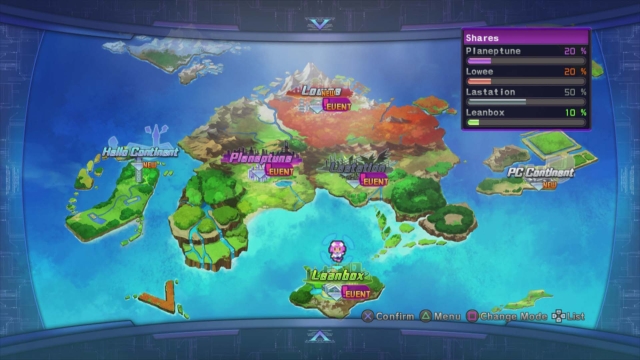 Gameplay largely revolves around quests that can be accepted at the Guild Hall, which must be completed in dangerous dungeons full of enemies. The quests come in two types: those that advance the plot and those that exist merely to provide you with rewards. The requirements to complete quests are of the standard RPG variety, where you kill X number of enemies or collect a set amount of items. The game never gives you much reason to care about the generic quests, in part because the rewards are never anything that offers much value. I found myself accepting all available quests (since there are no negatives repercussions for failing to complete them) and then finishing them without much direct effort while I spent time training in dungeons.

One of the more interesting mechanics the game offers is the item development, which returns (along with many other gameplay systems) from Hyperdimension Neptunia Mk 2. Item development allows you to create both equipment and health items by using materials you receive from defeated monsters and from harvest points within dungeons. Items you develop are added to stores as inventory. To develop these items, you first need to gather plans which are found in dungeons and as rewards for completing quests.

Once you enter a dungeon you can do several things: battle enemies for loot and experience, search for hidden items and explore the dungeon. A battle is initiated when the player and an enemy come into contact. You are given the ability to gain the upper hand in a battle by using a symbol attack. To perform a symbol attack, you simply press the X button to swing a weapon. If you strike the monster with that attack before it can brush against you, youll be allowed to make the first move in the following battle. Its similar to the system used in some of the more recent Persona titles. Making the enemy encounters visible is a smart design choice, one that makes it easy for you as the player to keep away from battles when your HP is low. 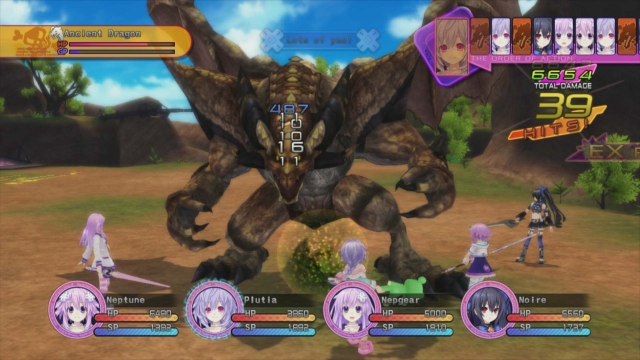 As you explore dungeons, you can also press the Square button to search for hidden objects. Anything that you find is almost always better than the standard ones lying around in the dungeon, although youll find yourself constantly pressing the button as you explore until you find the randomly hidden goodie in a particular area (it regenerates in a new location each time you exit and reenter the dungeon).

The games problems are most evident as you explore the dungeons. I found the 3D movement inside of those dungeons to be clunky, and framerate hiccups were also common. Another annoyance is that whenever you make your character jump, one of a few lines of dialogue always plays. Neptune saying, "I'm a kangaroo!" is cute the first time, but not so much on the fiftieth. The dungeons also have a very generic look that isn't helped by the fact that the game not only reuses assets liberally, but even reuses the same exact map layout in different dungeons. That is unacceptably lazy level design, especially since the layouts aren't well-crafted in the first place.

Combat, however, is not a low point. It has a variety of interesting systems at play. Although battles are turn-based, you can move your character before taking turns each round, much like you would in a strategy game. Positioning can be a key element as you defeat your enemies. You want to be able to hit multiple enemies with one attack when dealing with grunts. When it comes time to face a larger foe, it helps to attack from multiple angles so he cannot hit multiple party members with a single attack. 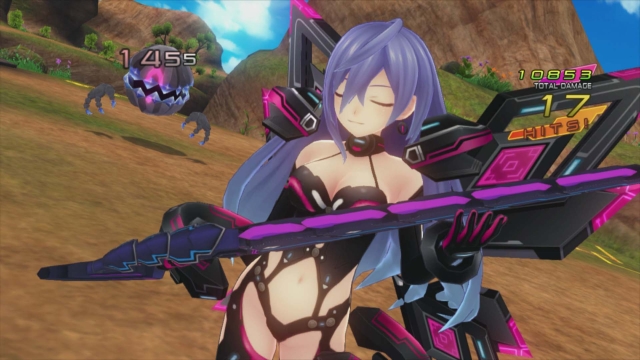 When you are within the proper range to attack, you can either start a combination attack or use your character skills. Attacks will reduce the enemies HP and their Guard Point gauges. Pressing the X button will unleash a normal attack, which then can be followed up with a combination of three attack types: rush, power and break. Rush attacks emphasize multiple hits over damage, which can be helpful in certain situations. Break attacks are effective against the enemies guards and power attacks are, as the name suggests, powerful. Enemies will fall to your attacks much more quickly once you break their guard, though they can start to recover if you dont press your advantage. As you level up you will unlock more powerful combination attacks, which leads to more depth still (although the game gets to a point where the character's level matters more than any strategy). That last point is disappointing, because the game quickly goes from interesting to repetitive when you find yourself faced with grinding sessions.

Combat also grants you access to the EXE Drive Gauge, which allows you access to an EX Finisher or to EXE Drive Skills. The gauge fills when you are being attacked or when you attack, and it continues to fill as you spend more time in a dungeon without leaving. This encourages you to stay in one area for an extended amount of time, since the availability of EX Finishers at the end of every standard combination makes enemy encounters far easier. Its nice to see the game offer a reward the player for not exploiting the full health and SP refill you gain by exiting and then reentering a dungeon. You instantly lose a bar from that gauge, though, when you make use of an EXE Drive Skill.

More standard skills work independently of the EXE Drive Guage and simply rely on your available skill points. They let you cast magic on foes, heal party members and use powerful special attacks. You can also use skill points to make Neptune and friends go into their HDD mode. HDD mode uses up 20 percent of your maximum skill points each time it is activated, and makes a characters true CPU form available. In this form, stats are increased substantially and so is the characters bust line. Seriously. The young girls are transformed into scantily clad women who wear battle gear that is intended more for fashion than function. I'm not sure why Compile Heart decided to go in this direction, but its a franchise staple and it contributes to far too many excessively sexual scenes (including a group bath). Some of the humor gets pretty crude and takes away from an otherwise well done localization job by NIS America. 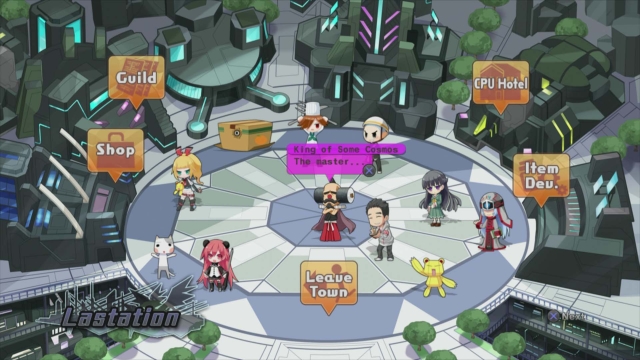 Visually, the game is below par. The games interface looks like a Playstation 2-era RPG and the dungeons are sparse, and yet the engine still has technical issues such as the aforementioned framerate. Some of the enemy design is fun, but nothing in the game will wow you visually and youve already seen nearly all of it if you played through the previous game. The one positive side about the visuals is that the 2D character art shown during dialogue is nice and very expressive. The audio is also a strong point, featuring good voice acting and some catchy music that I found myself humming over time.

Despite some missteps, the localization and dialogue is where the game truly shines. NIS America did a good job of mixing in pop culture and video game references. Its not often that I encounter dialogue in a game that is genuinely funny, but I found myself laughing audibly dozens of times while playing through this one. Everything from BlazBlue to The Dark Knight is referenced in the lengthy conversations. It doesn't stop there, either; both the enemies you find in dungeons and the characters youll meet in towns are drawn from pop culture. In Lowee, for example, you meet a man in red named Maryo who complains that he is getting tired of saving a woman. Inside the dungeons, you will find some characters that are based off of classic arcade games such as the ghosts from Pac-Man and the invaders from Space Invaders. Longtime gamers will appreciate these nods to gaming history.

Hyperdimension Neptunia Victory slightly overstays its welcome over the course of an adventure that lasts forty-plus hours, but even with all of the grinding, it never gets too strenuous until later in the game. While the dungeons are both generic and repetitive, youll still find yourself wanting to continue the adventure just to see what happens next in the story. Neptune may claim to be the star of the game, but it quickly becomes very clear that the true star is the world of Gamindustri itself. More than anything else, that setting is what saves an otherwise disappointing RPG.
2.5/5

If you enjoyed this Hyperdimension Neptunia Victory review, you're encouraged to discuss it with the author and with other members of the site's community. If you don't already have an HonestGamers account, you can sign up for one in a snap. Thank you for reading!

© 1998-2020 HonestGamers
None of the material contained within this site may be reproduced in any conceivable fashion without permission from the author(s) of said material. This site is not sponsored or endorsed by Nintendo, Sega, Sony, Microsoft, or any other such party. Hyperdimension Neptunia Victory is a registered trademark of its copyright holder. This site makes no claim to Hyperdimension Neptunia Victory, its characters, screenshots, artwork, music, or any intellectual property contained within. Opinions expressed on this site do not necessarily represent the opinion of site staff or sponsors. Staff and freelance reviews are typically written based on time spent with a retail review copy or review key for the game that is provided by its publisher.