This review must open with a confession: I havent finished Super Hexagon. As a reviewer, this would usually be something not to admit so openly. Only, in this case, such a statement is probably the most fitting review I can give. The latest Steam cult hit in-the-making Super Hexagon is a fast-paced, addictive skill game unrepentant for its cold-blooded difficulty. Ive tried to beat it and I cant. If YouTube had not shown me otherwise I would not believe that the game could be beaten. 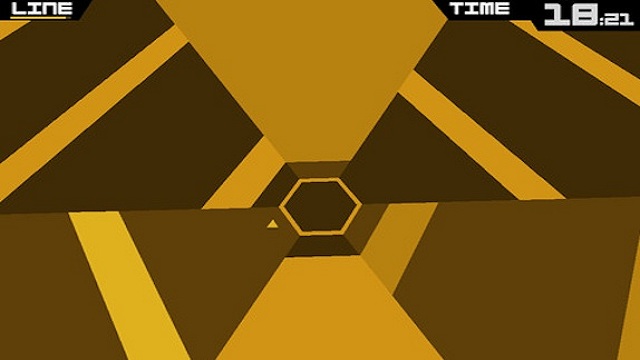 To shamelessly mangle a Frank Zappa quote, writing about Super Hexagon is like dancing about architecture. Its a game that needs to be played in order to understand the appeal; a verbal description will always sell it short. As the player, you take control of a pixel that must be moved around the sides of a central hexagon to avoid collision with oncoming shapes comprised of throbbing light. The only controls are left and right. Oh, and the space bar. Thats what you press to try again after a game over. Youll be using it a lot.

Its a simple concept that might not appeal to gamers who are used to having a little more control over their fate. The player cannot influence which way the screen turns or how quickly; oncoming bars cannot be attacked or broken in any way; instead youre forced to adapt and react in a split-second to the different shapes being thrown at you, be it a succession of squares with only the tightest of gaps to squeeze through, or pentagons that dont open up until theyre right on top of you. In terms of a singular, focused concept, you might say its the modern day Tetris. 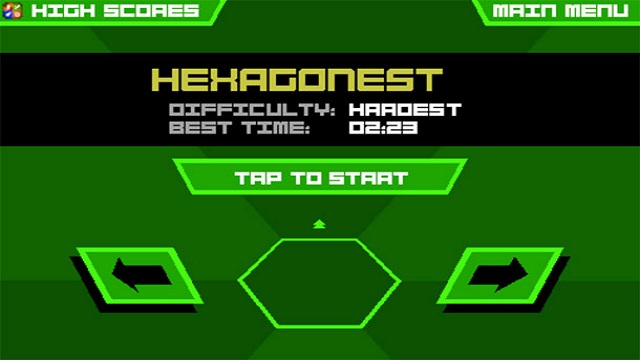 Similar to that gaming giant, the challenge of Super Hexagon is to hold out as long as you can against ever lengthening odds, in this case your survival time as your high score. After every ten or fifteen seconds the game shifts the type of geometric shapes thrown at you, from simple lines to fiendish mazes. The action speeds up, and the whole screen spins like a wayward Catherine wheel. Its an exercise in pure concentration and dexterity. Reach 60 seconds and the even more difficult Hyper Hexagon mode is unlocked. The colours onscreen change to upset your focus, the patterns of shapes grow more complicated and difficult to avoid, and the gameplay accelerates to a brain-melting speed. Survive a minute here and youll reach the next Hyper level, where everything steps up once again. Progress past every Hyper level, and you beat the game. At least, thats what I think happens. Im not good enough to see it for myself.

In fact, youre doing well if you last for longer than 5 seconds on your first try. Super Hexagon is an unforgiving game. The only difficulty modes available from the start are Hard, Harder, and Hardest. The true beauty of the game is that this deliberately perverse difficulty is just rewarding enough that its rarely frustrating. 5 seconds soon turns into 10, and 10 into 20. Each tiny advance is an enormously gratifying achievement. Leaderboards show how you match up with players worldwide, and feeling your pride dissipate as your new high score languishes toward the bottom offers vital motivation. With perseverance youll soon reach that magic minute, having relished every breakthrough along the way. A good run is pleasingly hypnotic, thanks in no small part to the pounding retro soundtrack. The chiptunes perfectly compliment the basic graphics and help to induce a near-trance state as it intensifies alongside the action, the addictive rhythms thumping and building into sparkling crescendo as you fight for just one more second of survival. Theres a different tune for each difficulty; the frantic beat of the Hardest level, at first only experienced as seconds-long snippets between restarts, is likely to haunt your sleep for months to come. 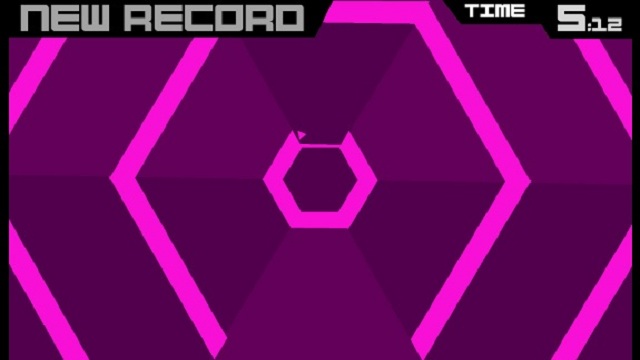 Super Hexagon will not appeal to everyone. Inevitably some will be put off after those first few abrupt game overs, and others may feel alienated by the lack of tangible reward. Yet the sheer simplicity of the concept, and the incredibly friendly price tag, makes it hard to complain. Super Hexagon is a master class in single-minded vision, minimalism in design, and pure addictive compulsion. Just be prepared to see it play on the insides of your eyelids when you go to bed at night.
4.5/5

If you enjoyed this Super Hexagon review, you're encouraged to discuss it with the author and with other members of the site's community. If you don't already have an HonestGamers account, you can sign up for one in a snap. Thank you for reading!

© 1998-2020 HonestGamers
None of the material contained within this site may be reproduced in any conceivable fashion without permission from the author(s) of said material. This site is not sponsored or endorsed by Nintendo, Sega, Sony, Microsoft, or any other such party. Super Hexagon is a registered trademark of its copyright holder. This site makes no claim to Super Hexagon, its characters, screenshots, artwork, music, or any intellectual property contained within. Opinions expressed on this site do not necessarily represent the opinion of site staff or sponsors. Staff and freelance reviews are typically written based on time spent with a retail review copy or review key for the game that is provided by its publisher.