There are a number of terrible puns that could open this review. Is there really more Need for Speed? Is another annually-updated franchise your Most Wanted? It gets tougher and tougher every holiday season to swallow down such cynicism (and to refrain from uninspired wordplay). Need for Speed: Most Wanted even has the exact same title as an earlier entry! But there is one crucial detail that warrants some excitement for this years NFS instalment: it's subtitled 'A Criterion Game.' And no developer delivers arcade racing thrills like Criterion.

Theres only one objective when Most Wanted turns you loose on the streets of Fairhaven: become the #1 most wanted driver in the city. How you go about this is entirely up to you. The mantra here is freedom. There are the obvious races and speed tests. Or you might toy with the local police force and earn a reputation. You might even forego all of this and simply cruise around the expansive city setting speed camera records and barreling through billboards. Every action is rewarded with speed points. Rack up enough of those and you earn the right to challenge Fairhavens top ten most wanted drivers. Beat them and you dont just move up the rankings; you take their ride, too. 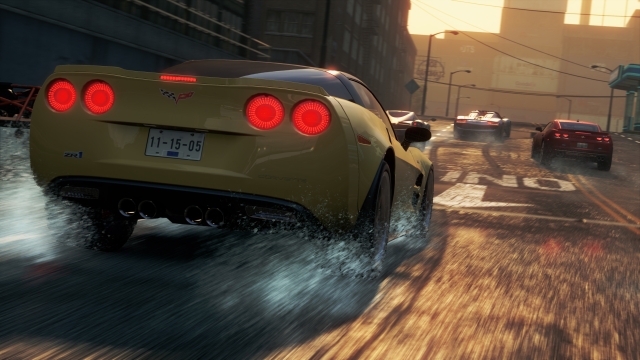 Its the only structure to a game that otherwise shrugs off restrictive design. The entire city is open from the start, and every car, except the most wanted, is also available. You just have to find them all. "Jackspots" are littered across the city, some in plain sight and others hidden. Each of those spots grants access to a car. Find a vehicle and you can drive it. Its a simple idea that acts to encourage exploration of the games beautifully realised environment.

This free-roaming structure is a real refinement of the structure that Criterion introduced with Burnout Paradise. Fairhaven is more varied than Paradise City, offering up dreamy seafront and urban sprawl, winding country lanes and shortcuts through industrial estates. Its often stunning, right down to the small touches like moisture from the exhaust clinging to the camera or the brief light flare when you emerge from a tunnel. Its a genuinely nice place to be, so searching for new jackspots is never a chore. Its clear that Criterion has taken just as much pride in the environment as it has in the cars.

Thats not to say that Most Wanted doesnt contain gratuitous car pornography. The curves and lines of all the usual suspects, from Porsche to Bugatti, are rendered so lovingly you wonder if the developers went blind. Its a shame that, for whatever reason, Ferrari is absent from the game. However, there are some interesting roster additions (including a Ford Pickup and a Lancia) that provide a welcome challenge when pitted against faster machines. Theres a satisfying disparity in how each of these vehicles handle. A Lamborghini Gallardo drifts round corners like butter across a hot pan. A Dodge Charger takes a little more elbow grease. 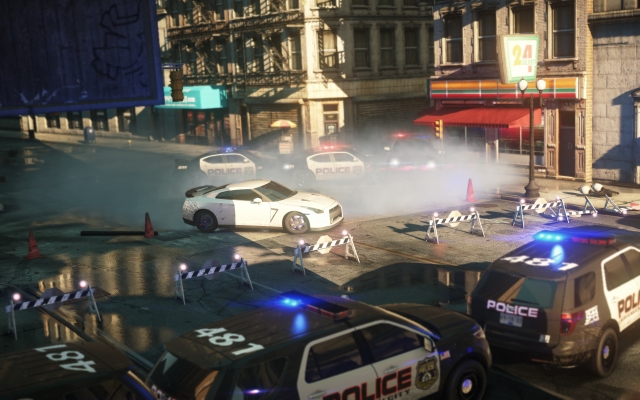 You can alter how cars handle with modifications. Perhaps the biggest change in Most Wanted is that all cars start out with only standard gear; that is, a steering wheel and four tires. Even boost is absent. Modifications, including boost, are earned by placing well in races and challenges. This is a good incentive to try out the whole arsenal of cars rather than sticking to a favourite, and again offers some loose structure to drive the game forward.

Your choice of modifications can make or break your race. Equip an aero body and youll come off the worse in any tussle. Take a hit from a police stinger without re-inflatable tires equipped and all you can do is limp along and hope you pass a roadside garage. Modifications are implemented through the games Easydrive system, an in-game menu accessed on the PS3 by using the D-pad. In theory, this allows you to adapt to changing circumstances as a race unfolds. In practice, youll probably crash spectacularly into a post. Its the same reason you shouldn't text when you drive in real life. This limitation isn't necessarily a bad thing; with on-the-fly modification ruled out, pre-race prep is more important than ever. Each event becomes an exercise in risk assessment. It adds more strategy than easily having everything available would.

The racing mechanics will otherwise be familiar to anyone who has played a Criterion game before: long looping corners beg for a perfectly executed drift; traffic acts as a shifting obstacle course; opponents can be smashed out of your path with a well-placed shunt (earning you more speed points). It might be familiar, but its still breathless stuff. Courses are more linear than they were in Burnout Paradise, with the route and checkpoints displayed via onscreen map. This facilitates focused and competitive races, plus there are enough shortcuts and alternative paths that you wont feel too restricted. 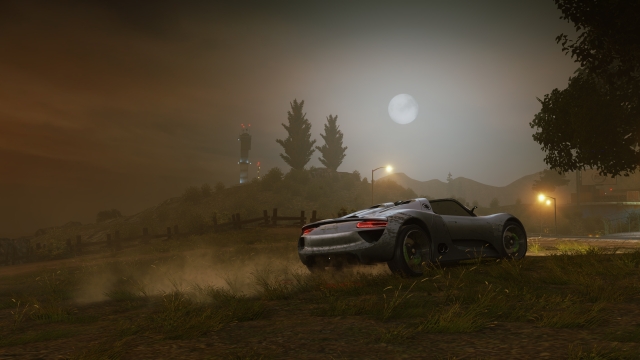 Police serve to make the action less predictable. Although stripped of many of the powers they wielded in Hot Pursuit, Criterions last NFS effort, the AI remains pathologically aggressive and stinger strips are hugely more devastating than before. The police get involved in most races, their level of pursuit usually decided by the difficulty rating of the event. On the lowest level, the worst youll suffer is a patrol car in your rear view mirror. Hit the highest pursuit level and youll be descended upon by SWAT vans that hit like tanks.

The core of the game, then, is just as exhilarating as ever it was. The problem is that there just isnt quite enough of it in single-player. Cars are divided into stat-based classes, and the majority of these share events. Its a real disappointment to uncover a shiny new vehicle, only to discover that you've already seen all its races in another motor. Unlocking the modifications offers some motivation to repeat races, but once you've snagged them all theres little opportunity to put them to the test. They dont carry over into the game's multiplayer.

EA has tried to plug this hole in the single-player game by implementing their Autolog system further than ever before. Youre no longer just competing against police and AI rivals. The system now tracks everything from personal best race times to longest jump through a billboard or top speed past a speed camera. These are immediately visible to any of your friends playing the game. Your face will even appear on the billboard if you hold the best jump. It's a great idea for increasing competition and the single-player game's longevity as you battle to reign supreme over your mates. The only shortcoming is its reliance on having friends with their own copies of Most Wanted. 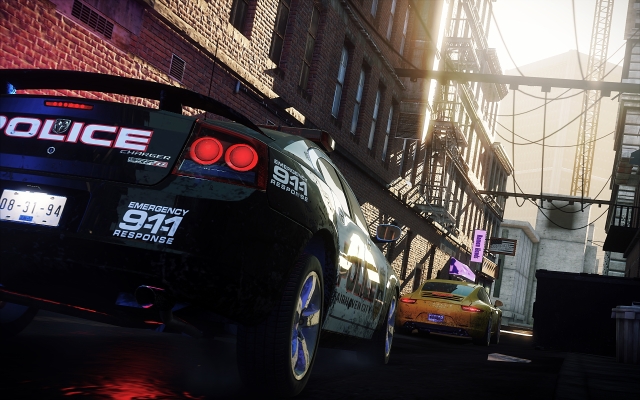 Then, of course, there's the online multiplayer to consider. This again takes a cue from Burnout Paradise and drops you into the city to make it your playground. You can just burn around with friends, but the meat of the multiplayer is Speedlists, a compilation of different events played against up to seven other racers. These range from standard races to drift, speed, and jump challenges, lending the gameplay some welcome variety. With human competition the races are unpredictable, although the police are less of a factor. Things are also mixed up by modifications being dealt out like perks, based on your actions during an event.

Multiplayer is huge fun, but hardly groundbreaking, and not without its problems. Between events you must race to a meetup point, and these intervals frequently descend into tedious vehicular battles that delay the real action. Races don't have a starting line, which encourages you to jockey for position. This can be tough when you've just been shunted sideways into a wall. Event instructions scroll along the bottom of the screen once a race has already started, so it isn't always clear exactly what you should be doing.

So Need for Speed: Most Wanted doesn't quite pull off everything it attempts. Social integration is undoubtedly the future for such games, and while there's a step forward here, it's hardly a revolution. Still, Most Wanted succeeds where it truly matters. If you're after simulation and pinpoint accurate driving, you've probably worked out by now that this isn't the racer for you. If you fancy screaming around a gorgeously realised open city at breakneck speed making mischief and wreaking havoc, few games serve up satisfaction like this.
4/5

If you enjoyed this Need for Speed: Most Wanted [Criterion] review, you're encouraged to discuss it with the author and with other members of the site's community. If you don't already have an HonestGamers account, you can sign up for one in a snap. Thank you for reading!

© 1998-2020 HonestGamers
None of the material contained within this site may be reproduced in any conceivable fashion without permission from the author(s) of said material. This site is not sponsored or endorsed by Nintendo, Sega, Sony, Microsoft, or any other such party. Need for Speed: Most Wanted [Criterion] is a registered trademark of its copyright holder. This site makes no claim to Need for Speed: Most Wanted [Criterion], its characters, screenshots, artwork, music, or any intellectual property contained within. Opinions expressed on this site do not necessarily represent the opinion of site staff or sponsors. Staff and freelance reviews are typically written based on time spent with a retail review copy or review key for the game that is provided by its publisher.