Fhey Area was a tranquil land of warmth and peace, governed by a benevolent king and protected by a gentle goddess . . . until the demons came. A foul army of ghoulish creatures gathered beneath the blood-red sky, lighting the very ground ablaze as they ransacked village after village. This narrated introduction sets an unoriginal but appropriately dramatic stage for Wolf Team's very first Mega CD RPG. I always enjoy a solid, old-school fantasy adventure, and I expected to enjoy Fhey Area.

This mismatched "double intro" -- a serious tale of a beleaguered land, followed by an energetic introduction to the heroes who would save that land -- was a cheesy but charming tactic often employed in CD roleplaying's early days. High-quality music and ROM-hogging cutscenes couldn't fit on an 8-meg cartridge, and the flashiest CD games made sure you knew it.

Fhey Area isn't particularly flashy. Once the introductions end, you won't see another cutscene until the final boss is dead. As far as final bosses go, Fhey Area's "Vi Ru To Ra" has even less of a backstory than that famous deus boss machina named "Zeromus". The oddly-named dark dragon is supposedly a source of great evil, but most of the game feels like an easy-going romp across sunny plains and bright green forests. That's a stark contrast against the fiery opening visuals. At only one point did Fhey Area even try to make me feel as though all hope was lost. When the nation's strongest warrior organizes a raid upon the demons' castle, she is presumably killed by a tsunami . . . unfortunately, the fact that she survives is spoiled by full-page pictures in the game's instruction manual.

If your Fhey Area CD didn't come with instructions, I apologize for the above paragraph.

Despite lacking dramatic tension, the game does have its good points. After starting the adventure, our hero -- a young man named Raphael -- wakes up in bed. That's not the good part. The beautiful Queen, who happens to be passing through town, nonchalantly informs Raphael that he's probably the descendant of a famous warrior who saved the world 1000 years ago. Although an interesting observation, that's not the good part, either. Raphael then visits the Queen in her hotel room. That could have been a really good part, but sadly, no.

The good thing about this scene is the music. The track that plays in Raphael's hometown is a simple composition with a spectacular vocal performance -- and not cheap synth vocals, either. A cool echoic effect has been applied to the voice, and through my Sennheiser HD 650 headphones, I could actually hear the singer pause to breathe. This be real, man, this be real.

That's the game's standout song. Fhey Area features one of Motoi Sakuraba's earliest RPG soundtracks, from back when he was best known for his fast-paced action melodies. Unlike the exciting and bold Arcus II soundtrack, this one opts for a more ambient approach, with mostly disappointing results. Still, it's Sakuraba. The guy knows music, and it shows even in his weakest work. The ending theme begins with a piano solo reminiscent of Arcus Odyssey and concludes with a melodic line that could have come straight from the Force of Light album. If this weren't reminding me of better music, I'd probably love it. 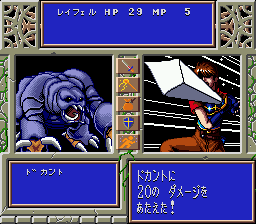 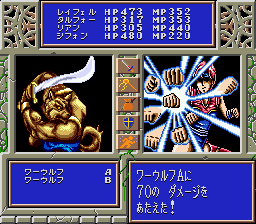 Fhey Area also includes some sweet battle scenes. A monster's portrait appears on the left, a hero's portrait appears on the right, and those pictures change as the characters deliver crushing blows and endure brutal magical attacks. The heroes wield a variety of techniques, including weak "hit 'em all" spinning attacks and stronger (but less accurate) blade thrusts. Aside from the magic spells, the fights flow very smoothly . . . and the only reason I dislike using magic is because the game pauses to load a fancy redbook audio sound effect for every spell. Wolf Team clearly put a lot of effort into those effects; pop the CD into your car stereo and you'll have to skip 60 tracks of thunder and explosions to get to the music. It's unfortunate that the Mega CD's slow single-speed drive tarnished that effort.

The characters barely speak to each other, but after watching everyone engage in close-up action across a few hundred battles, I actually started to feel some connection to Raphael and his friends. Chiffon punches and kicks her foes with unbridled zeal, Lian overcompensates for her physical weakness by swinging her staff so hard that it appears to bend, and Tarfo . . . uh . . . well, he smacks people with giant Mardi Gras beads. There's an impressive variety of opponents (especially considering they all have full-body portraits), and Wolf Team only resorts to "palette swap" shenanigans once. Knife-wielding assassins, blue-skinned anime archers, and even Nyarlathotep make appearances throughout the game's twelve dungeons. 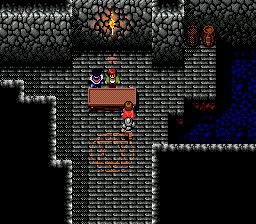 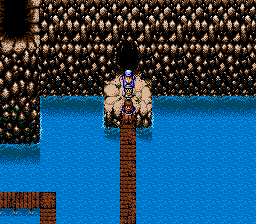 Twelve isn't many dungeons for an RPG, especially since most of them are only two floors deep. To lengthen the game -- or maybe because Wolf Team wanted to show off their fancy battle action -- Fhey Area forced me to fight monsters EVERY EIGHT STEPS. That's an insane encounter rate, and it ruined any enjoyment I would have gleaned from exploring the game's towers and caverns. Fhey Area also requires an enormous amount of experience to progress in level, which is a major pain in the ass when the (ridiculously frequent) encounters are so challenging. I could swear that 25 of the game's 30 hours were spent in combat, and I did swear. Often.

Fhey Area's music is decent enough, and the combat system demonstrates flashes of brilliance, but that effort is undone by a short quest, a shallow plot, and a shameful random encounter rate. Even the characters are disappointing -- there's no emotional growth to any of them. This is from the same developer that gave us charismatic heroes like Earnest Evans, spunky heroines like Yuko Ahso, and despicable villains like Luan Khan. Come on Wolf Team, I know you can do better! Why isn't there any banter between the main characters? Where's the dramatic rivalry? You never even introduced us to the big bad villains until the final four minutes -- and this is an 1800-minute game!

Fhey Area's opening cinematic promised an exciting dark fantasy adventure, but that proved to be a promise unfulfilled. At least we'll always have that first town's music.

If you enjoyed this Seirei Shinseiki Fhey Area review, you're encouraged to discuss it with the author and with other members of the site's community. If you don't already have an HonestGamers account, you can sign up for one in a snap. Thank you for reading!

© 1998-2020 HonestGamers
None of the material contained within this site may be reproduced in any conceivable fashion without permission from the author(s) of said material. This site is not sponsored or endorsed by Nintendo, Sega, Sony, Microsoft, or any other such party. Seirei Shinseiki Fhey Area is a registered trademark of its copyright holder. This site makes no claim to Seirei Shinseiki Fhey Area, its characters, screenshots, artwork, music, or any intellectual property contained within. Opinions expressed on this site do not necessarily represent the opinion of site staff or sponsors. Staff and freelance reviews are typically written based on time spent with a retail review copy or review key for the game that is provided by its publisher.