Rock of Ages is the best game about rolling boulders down mountains through obstacle courses youll play all year.

Of course, theres more to it than that. Rock of Ages is basically what would happen if Monty Python decided to mix Marble Madness with a tower defense game. The object of the game is to guide your boulder through a series of obstacles and traps so that it can reach a gate at the bottom. Smash into the gate hard enough and youll damage it. When you deal enough damage, the gate will break and youll be able to squish the mythical or historical figure behind it to win the match.

While you whittle away at the gate, your opponent will be doing the same thing on an identical course on the other side of the mountain. Players can set traps and place obstructions that will block the path leading to their own gate, hopefully slowing their opponents boulder, or damaging it enough to weaken it. 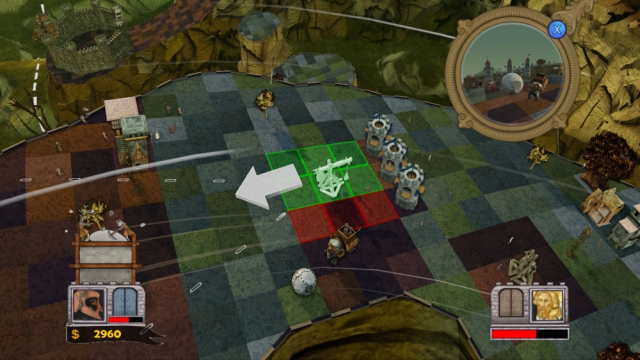 Available obstacles include towers, powder kegs, fans (which blow a boulder off course), catapults, and more. The obstacles all fill very different roles, but theyre not necessarily all equal. Youll probably find that people use more catapults than anything else, with the occasional fan or tower thrown in at certain spots. You cant place any obstacles directly in front of the gate, meaning its not that difficult for an attacking boulder to gain a good bit of speed in the home stretch.

Obstacles that slow you down are less about reducing inertia and more about making your turn take as long as possible. You wont be rolling down the same course, but make no mistake: each battle is primarily a race. Whoever can get to his or her opponents gate the fastest is usually the player who will come out on top. Hitting the gate faster does more damage, while getting to the bottom faster means youll be able to start your next turn earlier and hopefully land more hits than your opponent.

So those are the games Marble Madness and tower defense aspects. As for the Monty Python part, this whole game has the art style of a Monty Pythons Flying Circus cartoon. The single-player campaign starts in mythical ancient Greece, where Sysiphus decides hes spent enough time pushing that boulder up that mountain and decides it would be better used for crushing people. From there he travels through the Dark Ages, the Renaissance, and beyond, crushing historical figures beneath his boulder all the while. Characters like Giovanni deMedici and Agamemnon look as though they were cut directly out of famous paintings. This game is probably the last thing Albrecht Dürers brain showed him the moment before he died. The style brings with it a number of humourous between-level cutscenes. Some are movie references, while others are hilarious in their own right. The tone and style of this game is very unique and helps it feel like more than simply Katamari Damacy of War. 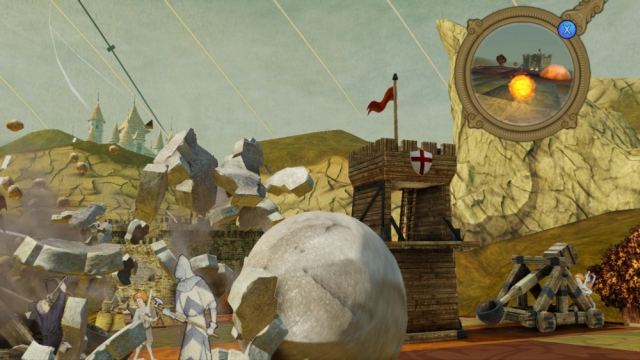 The general style changes as you make your way through history. Early Greek characters and levels look like a painting you might find on an ancient Greek urn, with lots of dark browns and faded yellows. Later levels are more colourful and detailed, lighter or darker, reflecting popular styles of art at the time. You may want to keep playing just to see what future levels and characters look like. Unfortunately the difficulty curve doesnt progress as smoothly as the art ever-changing art styles. A level may seem to be significantly less difficult than previous ones, or more difficult than the level immediately following it. The AI simply seems to have more or less trouble with certain parts of specific courses than others.

Bosses keep the game from getting too formulaic. Instead of asking you to roll down a hill, boss battles place you within open arenas. Youll have to guide your boulder to the boss weak spot to damage it. I wont tell you what the bosses are, since theyre so wonderfully weird that theyre more fun when they come as a surprise, but the motif is always The spirit of the age in physical form, which itself is an amusing idea.

There are a few multiplayer modes to choose from. Of course, theres the standard War mode with which youll probably spend most of your time. Its almost exactly like the single player mode, except the AI is replaced with a human being. There are a few more modes to mix things up a bit, however. Obstacle Course mode is a head-to-head race to the finish line with both players navigating the same course. SkeeBoulder has you and your opponent racing down the mountain destroying targets for points on the way. At the bottom is a skeeball-style target with various holes assigned different score multipliers. Climbing to higher multipliers isnt difficult, but if youre too slow, your opponent may hit a lower multiplier faster, and only the first person into a hole gets a bonus. You have to decide whether to take the risk and aim for a high score or settle for a lower score and hope its enough. You can practice SkeeBoulder mode alone in single-player. Theres also a Time Trial mode for single players, complete with gold, silver, and bronze medals for low clear times.

Rock of Ages is a unique idea thats executed very well, minus one or two minor hiccups like AI inconsistency. If you have even a passing interest in this game, give it a try. At the very least, youll be playing something unique.
4/5

If you enjoyed this Rock of Ages review, you're encouraged to discuss it with the author and with other members of the site's community. If you don't already have an HonestGamers account, you can sign up for one in a snap. Thank you for reading!

© 1998-2020 HonestGamers
None of the material contained within this site may be reproduced in any conceivable fashion without permission from the author(s) of said material. This site is not sponsored or endorsed by Nintendo, Sega, Sony, Microsoft, or any other such party. Rock of Ages is a registered trademark of its copyright holder. This site makes no claim to Rock of Ages, its characters, screenshots, artwork, music, or any intellectual property contained within. Opinions expressed on this site do not necessarily represent the opinion of site staff or sponsors. Staff and freelance reviews are typically written based on time spent with a retail review copy or review key for the game that is provided by its publisher.