Katamari Damacy is a video game delicacy. You either love it or hate it. Sometimes you have absolutely no idea how to approach it. And while that may repulse and repel some players, that's always been the reason I've been drawn to it. The Prince's zany missions to roll up as many items as possible to replace the planets his father, the King of All Cosmos, destroyed were delectable, bite-sized pleasures. And the series has been complacent to revel in that first titles wanton silliness ever since its Stateside release. But with the exception of Katamari Forever, the games haven't always been able to recapture the same feeling that washed over us when the very first "na-na-nas" of the first game's soundtrack blared from the TV.

It's fair to say that by releasing installments so often, what was once a brilliant spectacle has now dimmed considerably, commentary that's being mirrored in the game's latest handheld release, Touch My Katamari. The PlayStation Vita's first Katamari adventure knows where it stands, and it's out to catch our eye one more time, even if it has to get down to brass tacks to do so. 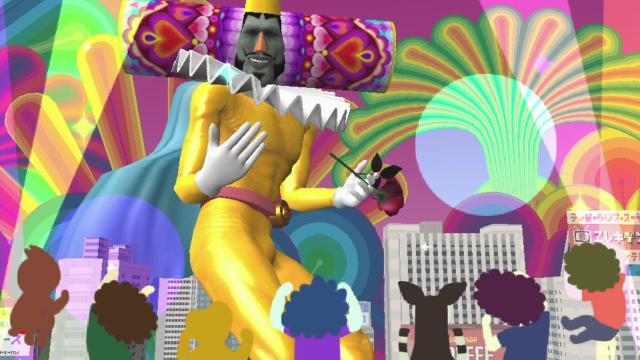 Touch My Katamari's somewhat depressing story finds gaming fans who are, like their real-world counterparts, a bit jaded. This simply won't do for the King of All Cosmos. Concluding that he needs his subjects to stay ever-adoring, he sends the Prince out on the same ball-rolling, pick-up-everything missions we know and love in a bid to start a "comeback." In typical Katamari fashion, the ways the King attempts to go about reaching his goal are quite misguided and hilarious, and all involve the Prince being forced to roll up certain objects, people, animals (and land masses, buildings, and more) in order to sate his father's outlandish appetite for all things fabulous.

Even without factoring in its strangely self-deprecating slant, Touch My Katamari is a fresh, funny return to form that serves up a heaping plate of what fans continue to enjoy about the series: hoarding several kinds of objects ranging from the rational to the implausible. Once your clump of junk (the katamari itself) is cobbled together and of a suitable size for the King's needs, it will be turned into a star -- just like old times!

Across a varied number of environments you'll roll up animals, food, household items, and any poor sap who dares get in the way of the Prince's task (and it's always hilarious to roll up a person). Your only objective is to keep rolling until the desired katamari size is met within a certain time limit. Some particularly difficult missions rear their ugly heads here and there, where estimating the size and other aspects of items comes into play, but otherwise you're out for blood. Anything can be made into a star. 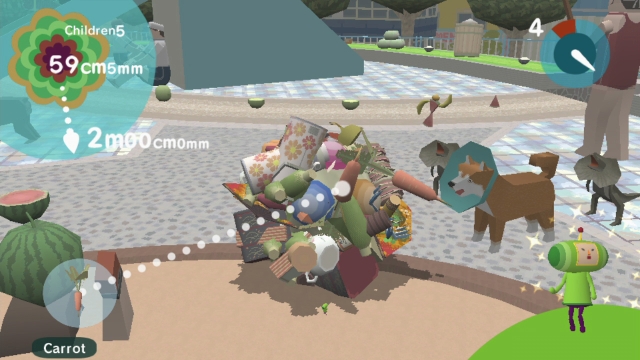 Though alternate missions may be unlocked after your primary goals are met, the game itself is a diminutive affair. Katamari Damacy fans should have no trouble breezing through the cursory twelve stages in a few hours or so, but at least there's the option to go back and pick up the various unlockables scattered throughout. Remember how much fun finding random gifts and cousins was? You've got plenty of opportunities to go back and do it again, except this time it's a little more interesting.

Curios, cousins, and other secrets are hidden throughout each stage. The more items you find, the better you'll be ranked at the end of each stage by dear old Dad. In turn, you'll receive pieces of candy that act as money for the in-game shops. There, alternate gameplay modes, clothing items, and various trinkets await. Half the fun of Touch My Katamari is shopping. So if completing the game isn't enough for you, going back for 100% completion via item collecting should keep you going.

While Touch My Katamari remains faithful, concept-wise, it differs greatly from previous installments due to its introduction of different control schemes. You can choose between utilizing both of the Vita's analog sticks, both of which work quite well, but I found the classic setup with nods to the series' origins served as the best bridge to getting used to the Vita's methods. Being able to use the Vita's front and rear touch pads, however, brought a whole new dynamic to the game. Flattening and otherwise distorting the shape of your katamari is enthralling, and offers countless new opportunities to experience a whole new side to a game you never thought possible. Deft shifting between forms is required for passing each area with ease, and that mechanic adds a satisfying layer of strategy to a game that's beginning to feel a little dated. 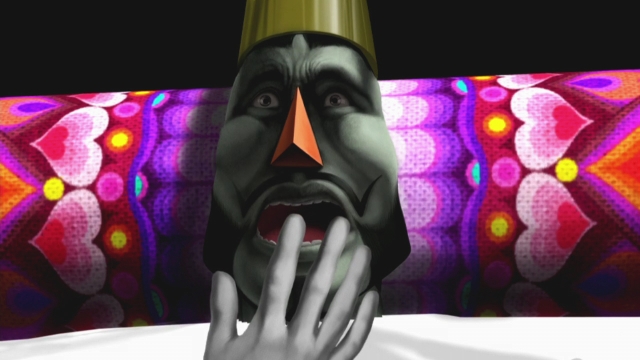 The tunes are still groovin' and the visuals are still pleasantly low-res, which only serve to add to the game's charm. But its new-school design elements and humor keep it from stagnating, instead propelling the franchise forward in new and interesting ways. At its heart, Touch My Katamari is the same monster we know and love, with a bright new coat of paint. And it shows quite a bit of potential for what the series could possibly undertake. For now, it's a bridge to bigger and better Katamari games that strips itself down to basics to grow from there. And like the in-game katamari, grow it shall -- hopefully into the brightest star yet.
4/5

If you enjoyed this Touch My Katamari review, you're encouraged to discuss it with the author and with other members of the site's community. If you don't already have an HonestGamers account, you can sign up for one in a snap. Thank you for reading!

© 1998-2021 HonestGamers
None of the material contained within this site may be reproduced in any conceivable fashion without permission from the author(s) of said material. This site is not sponsored or endorsed by Nintendo, Sega, Sony, Microsoft, or any other such party. Touch My Katamari is a registered trademark of its copyright holder. This site makes no claim to Touch My Katamari, its characters, screenshots, artwork, music, or any intellectual property contained within. Opinions expressed on this site do not necessarily represent the opinion of site staff or sponsors. Staff and freelance reviews are typically written based on time spent with a retail review copy or review key for the game that is provided by its publisher.